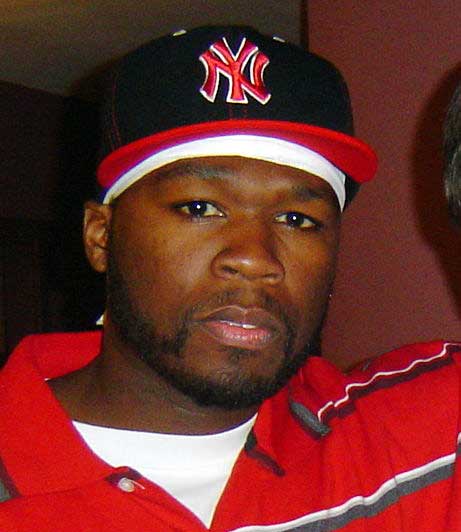 Curtis James Jackson III (born July 6, 1975), better known by his stage name 50 Cent, is an American rapper, actor, producer, and entrepreneur. Born in the South Jamaica neighborhood of the borough of Queens, Jackson began selling drugs at age twelve during the 1980s crack epidemic. He later began pursuing a musical career and in 2000 he produced Power of the Dollar for Columbia Records, but days before the planned release he was shot and the album was never released. In 2002, after Jackson released the compilation album Guess Who’s Back?, he was discovered by Eminem and signed to Shady Records, under the aegis of Dr. Dre’s Aftermath Entertainment and Interscope Records.

With the aid of Eminem and Dr. Dre (who produced his first major-label album Get Rich or Die Tryin’), Jackson became one of the world’s best selling rappers and rose to prominence with East Coast hip hop group G-Unit (which he leads de facto). In 2003, he founded G-Unit Records, signing his G-Unit associates Young Buck, Lloyd Banks and Tony Yayo. Jackson had similar commercial and critical success with his second album, The Massacre, which was released in 2005. He released his fifth studio album, Animal Ambition, in 2014 and as of 2019 is working on his sixth studio album, Street King Immortal. He executive produces and stars in the show Power, which airs on Starz.

During his career Jackson has sold over 30 million albums worldwide and won several awards, including a Grammy Award, thirteen Billboard Music Awards, six World Music Awards, three American Music Awards and four BET Awards. He has pursued an acting career, appearing in the semi-autobiographical film Get Rich or Die Tryin’ (2005), the Iraq War film Home of the Brave (2006) and Righteous Kill (2008). 50 Cent was ranked the sixth-best artist of the 2000s and the third-best rapper (behind Eminem and Nelly) by Billboard. Rolling Stone ranked Get Rich or Die Tryin’ and “In da Club” in its lists of “100 Best Albums of the 2000s” and “100 Best Songs of the 2000s” at numbers 37 and 13 respectively.

Jackson was born in the borough of Queens, New York City, and raised in its South Jamaica neighborhood by his mother Sabrina. A drug dealer, Sabrina raised Jackson until she died in a mysterious fire when Jackson was 8. After his mother’s death and his father’s departure, Jackson was raised by his grandmother.

He began boxing at about age 11, and when he was 14 a neighbor opened a boxing gym for local youth. “When I wasn’t killing time in school, I was sparring in the gym or selling crack on the strip,” Jackson remembered. “I was competitive in the ring and hip-hop is competitive too … I think rappers condition themselves like boxers, so they all kind of feel like they’re the champ.” At age 12, Jackson began dealing narcotics when his grandparents thought he was in after-school programs and brought guns and drug money to school. In the tenth grade, he was caught by metal detectors at Andrew Jackson High School: “I was embarrassed that I got arrested like that … After I got arrested I stopped hiding it. I was telling my grandmother [openly], ‘I sell drugs.'”

On June 29, 1994, Jackson was arrested for selling four vials of cocaine to an undercover police officer. He was arrested again three weeks later, when police searched his home and found heroin, ten ounces of crack cocaine and a starting pistol. Although Jackson was sentenced to three to nine years in prison, he served six months in a boot camp and earned his GED. He has said that he did not use cocaine himself. Jackson adopted the nickname “50 Cent” as a metaphor for change. The name was inspired by Kelvin Martin, a 1980s Brooklyn robber known as “50 Cent”; Jackson chose it “because it says everything I want it to say. I’m the same kind of person 50 Cent was. I provide for myself by any means.”

On October 13, 1996, Jackson’s girlfriend, Shaniqua Tompkins, gave birth to son Marquise Jackson. Tompkins later sued Jackson for $50 million, saying he promised to take care of her for life. The suit, with 15 causes of action, was dismissed by a judge who called it “an unfortunate tale of a love relationship gone sour.” The two have bickered for years, and have even taken their feud to social media many times.

Marquise’s birth changed Jackson’s outlook on life: “When my son came into my life, my priorities changed, because I wanted to have the relationship with him that I didn’t have with my father”. He credited his son for inspiring his career and being the “motivation to go in a different direction”. Despite this, the two have endured a fractured relationship that began when Jackson and Tompkins separated in 2008. Their feud has been taken to social media numerous times, including in 2020 when Jackson disclosed that he “used to” love his son. Jackson has a tattooed “Marquise” with an axe on his right biceps (“The axe is ’cause I’m a warrior. I don’t want him to be one, though”), and has “50”, “Southside” and “Cold World” on his back: “I’m a product of that environment. It’s on my back, though, so it’s all behind me”.

Jackson dated model Daphne Joy and had his second son, Sire Jackson, with her, on September 1, 2012. At the age of two years, Sire modeled for Kidz Safe, a headphone brand for kids, earning $700,000 through his contract.

In 2005, Jackson supported President George W. Bush after rapper Kanye West criticized Bush for a slow response to the victims of Hurricane Katrina. If his felony convictions did not prevent him from voting, he said, he would have voted for the president. Jackson later said that Bush “has less compassion than the average human. By all means, I don’t aspire to be like George Bush.” In September 2007 he told Time that although he would not endorse a candidate in 2008, he “liked Hillary [Clinton]”. Six months later the rapper told MTV News that he had switched his support to Barack Obama after hearing him speak, but had lost interest in politics. Asked his opinion of President Obama’s May 9, 2012 endorsement of gay marriage, Jackson said, “I’m for it … I’ve encouraged same-sex activities. I’ve engaged in fetish areas a couple times.” He had been criticized for anti-gay comments in the past.

Despite having numerous songs that reference drug and alcohol usage, Jackson remains teetotal, citing a bad experience with alcohol as his main reason.

Forbes noted Jackson’s wealth in 2007, ranking him second behind Jay-Z in the rap industry. He lives in a Farmington, Connecticut, mansion formerly owned by ex-boxer Mike Tyson, listing it for sale at $18.5 million to move closer to his son (who lives on Long Island with his ex-girlfriend). The mayor of Bridgeport, Connecticut declared October 12, 2007 “50 Cent Curtis Jackson Day”, honoring the rapper with a proclamation and a key to the city. One of Jackson’s New York homes, purchased in January 2007 for $2.4 million and the center of a lawsuit between Jackson and Shaniqua Tompkins, caught fire on May 31, 2008 while he was filming in Louisiana.

In December 2008, he told the Canadian press that he had lost several million dollars in the stock market and, unable to sell his Connecticut mansion, had postponed Before I Self-Destruct because of the economic downturn. Jackson won a lawsuit in November 2009 against Taco Bell over the fast-food chain’s use of his name without permission.

In 2016, regarding his beef with Meek Mill, he commented “You know, he’s really not that bright. That kid is not that bright” he said. “The easiest thing you can do is bring other people into the statements you’re saying, right, while you’re writing music. On May 4, 2016, after making fun of a teenager who, unbeknownst to 50, had a disability, he donated $100,000 to Autism Speaks.

On June 29, 1994, Jackson was arrested for selling four vials of cocaine to an undercover police officer. He was arrested again three weeks later, when police searched his home and found heroin, ten ounces of crack cocaine and a starter’s pistol. Although Jackson was sentenced to three to nine years in prison, he served six months in a boot camp (where he earned his high-school equivalency diploma). According to him, he did not use cocaine.

Jackson and four members of his entourage were arrested shortly before 2 a.m. on December 31, 2002, when police found a .25-caliber handgun and a .45-caliber pistol in a parked car (which they searched due to its tinted windows) outside a Manhattan nightclub. The rapper was charged with two counts of criminal possession of a weapon.

Jackson was sentenced to two years’ probation on July 22, 2005 for a May 2004 incident, when he was charged with three counts of assault and battery after jumping into an audience when he was hit by a water bottle.

Use of image
Jackson filed a lawsuit against an advertising company, Traffix of Pearl River, New York, on July 21, 2007 for using his image in a promotion he said threatened his safety. He was alerted by a staff member to an Internet advertisement on a MySpace page. According to court documents, the advertisement had a cartoon image of the rapper with “Shoot the rapper and you will win $5000 or five ring tones guaranteed”. Although the ad did not use his name, the image allegedly resembled him and suggested that he endorsed the product. The lawsuit, calling the ad a “vile, tasteless and despicable” use of Jackson’s image which “quite literally call[ed] for violence against him”, sought unspecified punitive damages and a permanent injunction against the use of his image without permission.

Use of name
In 2008, Jackson sued Taco Bell over an ad campaign in which it invited him to change his name for one day from 50 Cent to 79 Cent, 89 Cent, or 99 Cent, in line with pricing for some of its items, and they would donate $10,000 to the charity of his choice. The case was settled out of court.

While walking through Cincinnati/Northern Kentucky International Airport in May 2016, Jackson harassed and insulted a janitor at the airport, accusing him of being under the influence. The janitor was a hearing-impaired, autistic teenager named Andrew Farrell. The parents of the janitor had seen the viral video as disrespect and wanted to sue Jackson for his action against their child. The lawsuit was originally over one million dollars, but the parents settled for a $100,000 donation to Autism Speaks and his apology.

One of his New York homes, purchased for $2.4 million in January 2007 and the center of a lawsuit between Jackson and Shaniqua Tompkins, caught fire on May 30, 2008 while he was filming in Louisiana. On August 5, 2013, Jackson pleaded not guilty to one count of domestic violence and four counts of vandalism in a Los Angeles County court. If convicted of all charges, he faced up to five years in prison and a $46,000 fine. Model-actress Daphne Joy accused Jackson of kicking her and ransacking her bedroom during an argument at her condominium in the Toluca Lake neighborhood of Los Angeles on June 23. He allegedly caused $7,100 in property damage, leaving the scene before police arrived.

Judge Ann Nevins has ordered Jackson back to court because of Instagram messages he made over several months. She said Jackson was not fully clear about his funds and indicated posts of the rapper showing stacks of his money. In March 2016, Jackson claimed that he would no longer use Instagram, electing instead to have his profile page operated by someone else.