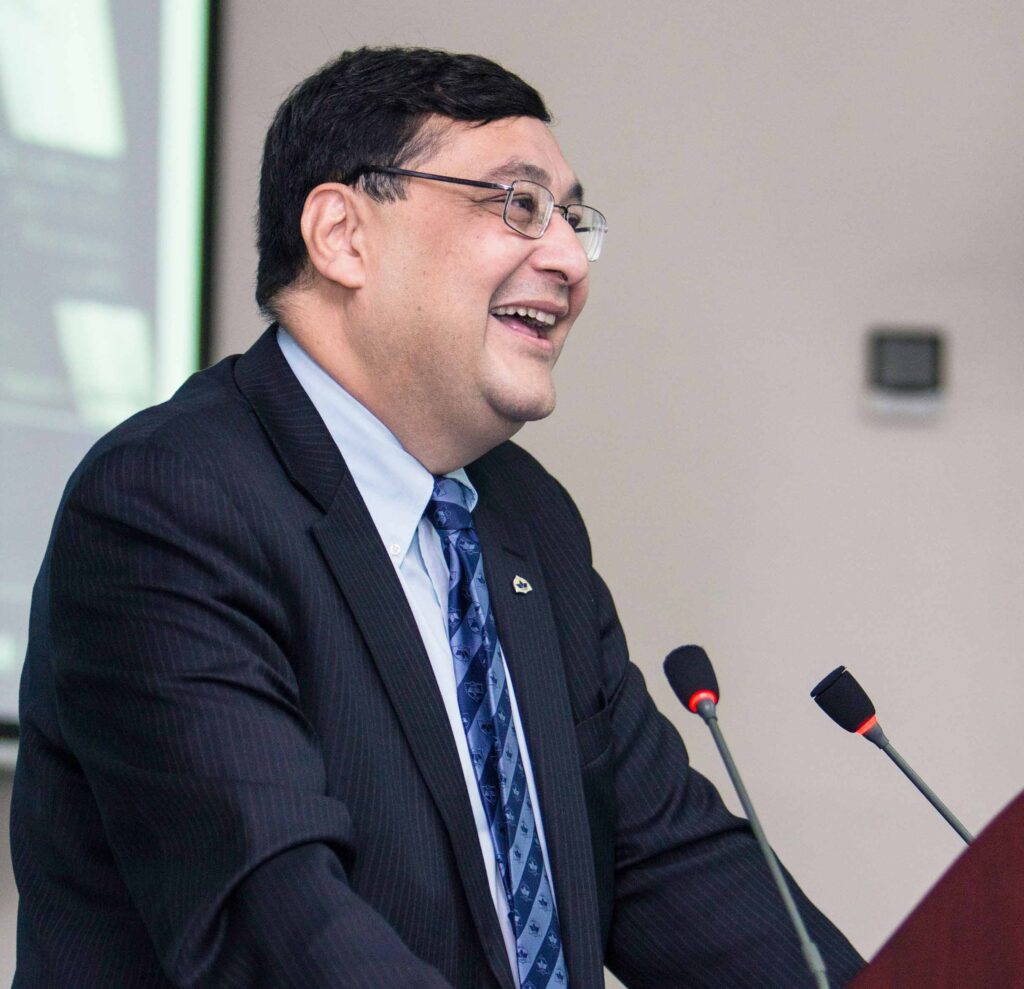 Adil Najam (Urdu: عادل نجم‎) is a Pakistani academic and intellectual who serves as the inaugural dean of the Pardee School of Global Studies at Boston University, and previously served as vice-chancellor of the LUMS.

Born in Rawalpindi, Najam studied civil engineering at UET Lahore and received two Master’s degrees and his PhD from the Massachusetts Institute of Technology in international environmental policy. After graduating from MIT, Najam joined Boston University in 1997 as an assistant professor, and moved to the Fletcher School in 2002 where he worked until 2007 as an associate professor of negotiation and diplomacy. He re-joined Boston University in 2007 as a tenured professor and the Director of the Pardee Center for the Study of the Longer-Range Future.

In 2011, Najam returned to Pakistan to head the Lahore University of Management Sciences (LUMS) as its third vice-chancellor. During his tenure at LUMS, he oversaw the launch of a major student financial aid program and brought in major philanthropic gifts to enable an expansion of the university. However, he faced criticism for not intervening over the controversial termination of Pervez Hoodbhoy by the University’s School of Science and Engineering. Najam left LUMS in June 2013, and returned to Boston University. A year later he was appointed the inaugural dean of Pardee School and continues till date.

Najam is a prominent member of the Pakistani intelligentsia. He was awarded Sitara-i-Imtiaz in 2008 by the President of Pakistan, and in February 2009, he was appointed to the Committee for Development Policy by the United Nations Secretary General. He is a senior fellow of the International Institute for Sustainable Development. He has also served as the Chair of the Boards of the South Asian Network for Development and Environmental Economics (SANDEE), of LEAD-Pakistan, and of the Luc Hoffmann Institute. He also serves as a Trustee on the International Board of the World Wide Fund for Nature and on the Board of The Asia Foundation. Adil Najam was awarded an honorary doctorate degree by the Information Technology University (ITU) in Lahore, Pakistan, in 2017, for his contributions in science, climate change and sustainable development.

Scholarly Work
Najam has published widely in scholarly journals and is the author of over 100 scholarly papers and book chapters.

He was amongst the early scholars working on impacts of and adaptation to climate change in developing countries. As a public intellectual, he has popularized the idea of living in the “Age of Adaptation” and conceptualizing water as being as important to climate adaptation as carbon was to mitigation.[20]

Adil Najam was the lead author for the 2018 Pakistan National Human Development Report, which focused on the topic of youth and included a first comprehensive district-by-district ranking in a national Human Development Index for Pakistan. The report and the district HDI index became a matter of much election campaign discussion during the 2018 Pakistani general election.

Bibliography
His recent books include How Immigrants Impact their Homelands (co-editor, 2013), “The Future of South-South Economic Relations” (co-editor, 2012), “Envisioning a Sustainable Development Agenda for Trade and Environment” (co-editor, 2007), “Portrait of a Giving Community” (2007), “Environment, Development and Human Security” (editor, 2003), “Civic Entrepreneurship” (co-author, 2002), amongst others. He serves on the editorial boards of several scholarly academic journals, including Global Governance, Ecological Economics, and Nonprofit and Voluntary Sector Quarterly.

Najam served as a lead author for the third and fourth assessment reports of the Intergovernmental Panel on Climate Change (IPCC). The IPCC was awarded the 2007 Nobel Peace Prize for its contributions to advancing the understanding of global climate change.[21]

Media
Early in his career Najam worked as a journalist (sports reporter and columnist) for various newspapers and magazines in Pakistan. He has been a frequent opinion contributor to major newspapers in Pakistan and in the international press.[22][23][24][25][26] During the late 1980s and 1990s he also hosted various talk shows such as “Mehman-e-Khasoosi” on Pakistan Television (PTV). He was awarded the Pakistan Television Outstanding Achievement Award in 1990. In 2007 Najam launched the blog “All Things Pakistan (Pakistaniat)” which won the Brass Crescent Award for the best South Asian blog in 2010 and was judged the best current affairs blog by the Pakistan Blog Awards 2010.[27]