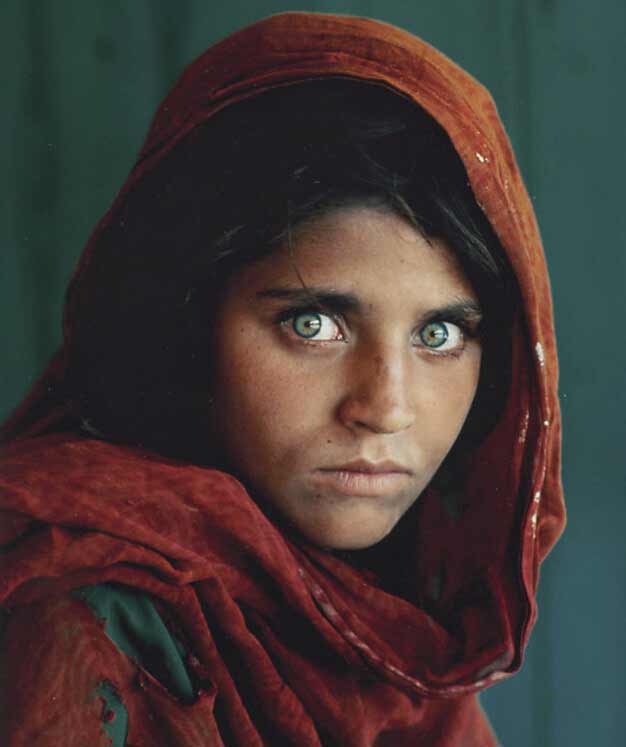 Afghan Girl is a 1984 photographic portrait of Sharbat Gula (Pashto: شربت ګله‎) (pronounced [ˈʃaɾbat]) (born c. 1974), also known as Sharbat Bibi, taken by photojournalist Steve McCurry. It appeared on the June 1985 cover of National Geographic. The image is of an adolescent girl with green eyes in a red headscarf looking intensely at the camera. The identity of the photo’s subject was not initially known, but in early 2002, she was identified as Sharbat Gula. She was a Pashtun child who was living in the Nasir Bagh refugee camp in Pakistan during the time of the Soviet occupation of Afghanistan when she was photographed.

It has been likened to Leonardo da Vinci’s painting of the Mona Lisa and has been called “the First World’s Third World Mona Lisa”. The image became “emblematic” of “refugee girl/woman located in some distant camp” deserving of the compassion of the Western viewer. It had also become a symbol of Afghanistan to the west.

Sharbat Gula was one of the students in an informal school in the Nasir Bagh refugee camp in 1984. Sharbat Gula’s photograph was taken by National Geographic Society photographer Steve McCurry, on Kodachrome 64 color slide film, with a Nikon FM2 camera and Nikkor 105mm Ai-S F2.5 lens. The pre-print photo retouching was done by Graphic Art Service, based in Marietta, Georgia. McCurry did not record the name of the person he had photographed.

The picture, titled Afghan Girl, appeared on the June 1985 cover of National Geographic. The image of her face, with a red scarf draped loosely over her head and her eyes staring directly into the camera was named “the most recognized photograph” in the history of the magazine, and the cover itself is one of the most famous of the National Geographic. American Photo magazine says the image has an “unusual combination of grittiness and glamour”. Her green eyes are the subject of frequent commentary.

McCurry made several unsuccessful attempts during the 1990s to locate her. In January 2002, a National Geographic team traveled to Afghanistan to locate the subject. McCurry, upon learning that the Nasir Bagh refugee camp was soon to close, inquired of its remaining residents, one of whom knew Sharbat Gula’s brother and was able to send word to her hometown. However, a number of women came forward and identified themselves erroneously as the famous Afghan Girl. In addition, after being shown the 1984 photo, a handful of young men erroneously identified Sharbat Gula as their wife.

The team located Sharbat Gula, then around the age of 30, in a remote region of Afghanistan; she had returned to her native country from the refugee camp in 1992. Her identity was confirmed by John Daugman using iris recognition. She recalled being photographed. She had been photographed on only three occasions: in 1984 and during the search for her when a National Geographic producer took the identifying pictures that led to the reunion with Steve McCurry. She had never seen the Afghan Girl image before it was shown to her in January 2002.

Pashtun by ethnicity and from a rural background, Sharbat Gula’s family fled during the Soviet Union’s bombing of Afghanistan when she was around six years old in their village in eastern Nangarhar. Along with her father, brother, and three sisters, she walked across the mountains to Pakistan and ended up in the Nasir Bagh refugee camp in Pakistan in 1984.

She married Rahmat Gul between the age of 13 and 16, and returned to her village in Afghanistan in 1992. She is now a widow as her husband died from Hepatitis C virus around 2012. Sharbat Gula has three daughters. A fourth daughter died in infancy. She expressed hopes that her children will be able to get an education. A devout Muslim, Sharbat Gula normally would wear a burka and was hesitant to meet with McCurry, as he was a male from outside the family. When asked if she had ever felt safe, she responded “No. But life under the Taliban was better. At least there was peace and order.” Until the National Geographic team found her again, she had never seen the photo of herself as a child. When asked how she had survived, she responded that it was “the will of God”.

In 2015, local newspapers in Pakistan reported that the National Database and Registration Authority (NADRA) canceled the Computerized National Identity Card (CNIC) to Sharbat Bibi and two men listed as her sons. Reports claimed the national ID cards had been issued illegally. A NADRA source is quoted as saying “They may not be her sons but this is a common practice among Afghan refugees whereby they list names of non-relatives as their children to obtain documents.” A relative stated that the family lives in Pakistan, but “We travel between Pakistan and Afghanistan depending on the security situation.”

On 26 October 2016, Sharbat Gula was arrested in Pakistan by the Federal Investigation Agency for living in the country using forged documents. She was sentenced to fifteen days in detention, and she was deported to Afghanistan. The decision was criticised by Amnesty International. In Kabul, Sharbat Gula and her children were welcomed by President Ashraf Ghani and former President Hamid Karzai at the presidential palace. The government promised to support her financially. In December 2017, Sharbat Gula was gifted a 3,000-square-foot (280 m2) residence in Kabul for her and her children to live in.