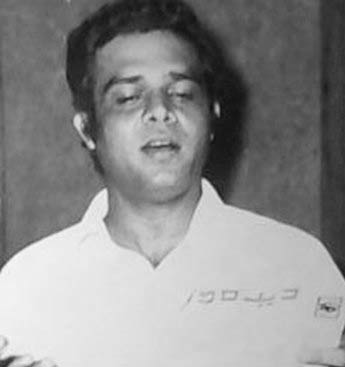 Ahmed Rushdi, SI, PP (Urdu: احمد رشدی‎; 24 April 1934 – 11 April 1983) was a versatile Pakistani playback singer and was “an important contributor to the golden age of Pakistani film music.” Regarded as one of the greatest singers in South Asia who could sing high tenor notes with ease, he is best known for his versatility and distinctive voice, with complex and dark emotional expressions. Considered as the first pop singer of South Asia, he sung South Asia’s first pop song, Ko Ko Korina, in the 1966 film Armaan .

Born in Hyderabad Deccan, he migrated to Pakistan following partition. In 1954, he recorded the official National anthem of Pakistan with several other singers. Rushdi has recorded the highest number of film songs in the history of Pakistani cinema in Urdu, English, Punjabi, Bengali, Sindhi and Gujarati and found unprecedented success as a playback artist from the mid-1950s to early 1980s. He was also known for his stage performance. He suffered from poor health during the latter part of his life and died of a heart attack at the age of 48, after recording approximately five thousand film songs for 583 released films. Besides popular music, Rushdi also helped popularize the ghazals of Naseer Turabi. He was awarded five Nigar Awards, the “Best Singer Of The Millennium” title, “Life Time Achievement Award”, “Legend Award” and Lux Style Award.

In 2003, 20 years after his death, Pakistani president Pervez Musharraf awarded him the Sitara-e-Imtiaz, the “star of excellence,” for distinguished merit in the field of arts. According to the 2016 survey of Asian Woman Magazine, Rushdi is declared as a darling singer of all time.

Ahmed Rushdi was born to a religious, conservative family of Hyderabad Deccan in 1934. His father, Syed Manzoor Mohammad, taught Arabic, Islamic History and Persian at Aurangabad College, Hyderabad, Deccan. He died when Rushdi was only six years old. From a young age, Rushdi was fond of listening to the musical programs, including songs, which were broadcast from the radio. He neither inherited music from any one, nor any body in his family was ever affiliated to music. Ahmed Rushdi’s singing talents impressed a very close friend of his father, whom he called uncle and who loved him dearly. He enrolled in a local music academy in Hyderabad Deccan. Moreover, two popular composers of the time, M.A. Rauf and Iqbal Qureshi, also taught music in the same school. Thus, Ahmed Rushdi learned the basics of music from the afore-mentioned teachers. Later, he got some training in classical music from Ustad Nathu Khan.

Ahmed Rushdi did not get any sort of formal training of classical music neither before nor after becoming a successful playback singer but he had an effective command over high and low notes. He sang his first song in the Indian film Ibrat in 1951 and got recognition. His family moved to Pakistan and settled in Karachi in 1954, where he began participating in variety shows, music programs, and children’s programs on radio. In 1954, he recorded his first non-film song, “Bunder Road se Keemari”, written by Mehdi Zaheer for the popular Radio Pakistan show Bachchon Ki Duniya; the song was a hit and became the steppingstone for Rushdi’s future.

After the success of “Bunder Road se Keemari”, Rushdi was offered songs as a playback singer for films and quickly gained popularity. He lent his voice to many hit films like Bara Admi (1956), Wah Rey Zamaney (1957), Raat Ke Rahi (1957), Yeh Dunya (1958) and many more. Rushdi got well recognition for singing “Mari lela ne aisi” in Anokhi (1956), “Chalak Rahi Hain Mastiyan” and “Chal Na Sakey Gi 420” in Raaz (1959). In 1961, he sang the popular song “Chand Sa Mukhra Gora Badan” in the film Saperan, for which he received his first Nigar Award as Best Male Playback Singer. He further strengthened his status as one of the top male playback singers in Mehtaab (1962), in which he sang “Gol Gappay Wala Aaya” for actor Alauddin; they would again be teamed in Susral. In 1966, he sang “Ko Ko Korina”, considered the first modern Pakistani pop song.

The film Anchal (1960) was an important film in Rushdi’s career. Music director Khalil Ahmed recorded an extremely sad number “Kisi chaman mei raho tum” in singer Saleem Raza’s voice but wanted Rushdi to re-record the song as he was not satisfied with Saleem Raza’s singing. Rushdi did so and the song recorded in his voice satisfied composer Khalil. Raza’s career as a singer was affected and doomed later on. After that, whenever Khalil composed music for any film, Rushdi remained his first choice. The mid-1960s saw the rise of brilliant singers like Mehdi Hassan and Masood Rana, but it did not affect Rushdi’s career and he kept on leading the film music.

Music experts including Nisar Bazmi, Sohail Rana and M. Ashraf are unanimous that Rushdi’s voice was best suited for every hero, comedian and even character actor. He lent his voice to Waheed Murad, Nadeem, Mohammad Ali, Santosh Kumar, Darpan, Habib, Rehman, Shahid, Qavi Khan, Ghulam Mohiuddin, Rahat Kazmi and was tailor-made for every actor of film industry. Rushdi’s voice was even ideally suited to comedians such as Munawar Zarif, Lehri, Nirala, Nanha and Rangeela.

In 1969, the film Andaleeb was released. Ahmed Rushdi recorded all the songs for Waheed Murad in this film. The song “Kuch log rooth ker bhi” was a hit. Its sad version was sung by Noor Jahan. Although he sang for every film hero in Pakistan, his pairing with Waheed Murad proved to be the most popular, in such movies as Armaan (1966); the song “Akele Na Jaana” from that movie in Sohail Rana’s composition gained Rushdi another Nigar Award. Well-known hits of Rushdi picturised on Waheed Murad such as “Lag rahi hai mujhey aaj sari faza ajnabi” or “Kuchh loag rooth kar bi” were composed by Nisar Bazmi, the legendary composer for Pakistani movies. Ahmed Rushdi-Nisar Bazmi pair and Ahmed Rushdi-Sohail Rana combination were two of the most successful singer-music director pairs of Pakistan film music.

The year 1980 proved to be a nightmare for Pakistan film industry. The number of Urdu films decreased rapidly and the era of Punjabi films started. In those films there was a very little room available for male playback singers as those movies were completely dominated by the songs in mostly female voices. Immediately following the military installation of Muhammad Zia-ul-Haq as President, measures were put in place to limit the distribution of music and the only source of entertainment was the government-owned television network Pakistan Television Corporation (PTV). While music videos were banned in the country. Rushdi sang in films like Farzana, Hanstey Aansoo, Haseena Maan Jaye Gi etc. but his glorious singing career was almost coming to an end.

Rushdi was not only singing for films, but he was equally a busy figure for Radio and Television also. He remained a leading singer between 1954 and 1983. He sang for all the famous actors of Pakistan film industry. Rushdi recorded his last song “Ban ke misra ghazal ka” in 1983 for film Hero, which was picturised on Waheed Murad and the song was a hit. He recorded a large number of duets in many languages with Noor Jahan, Zubaida Khanum, Runa Laila, Mala, Naheed Niazi, Irene Parveen, Naseem Begum, Mehnaz, Rubina Badar and Naheed Akhtar in his thirty-three-year singing career.

Ahmed Rushdi married Humera on 30 November 1963. His wife died in 1992, nine years after Rushdi. He belonged to a Sayed family (a sacred caste in muslims) and was a religious person. Despite his popularity and fame, Rushdi never had any scandal in his entire career. He had three daughters. His younger daughter, Rana Rushdi used to sing her father’s songs in his presence which always pleased Rushdi a lot. He was against allowing his daughters to adopt singing as a profession. Ahmed Rushdi and Noor Jahan were highest paid singers in their time but Rushdi did not charge those producers and music directors a single rupee, who could not afford him. Famous music director Lal Mohammad Iqbal made his entry into Pakistan film industry because Rushdi introduced him to different producers which he disclosed after Rushdi’s death. Likewise, poet Masroor Anwer got his first film as Rushdi insisted the music director Manzoor-Ashraf to give Masroor a chance.

In early 1980s, Rushdi shifted to Karachi as he was not feeling well and wanted to have a proper heart treatment. He was also singing less for films and film music itself was facing a decline. The 1980s saw a nose-dive in the progress of cinema in Pakistan. Number of cinemas decreased rapidly and people preferred watching television over going to a cinema. Playback singing that once was popular now struggled to exist and the singers needed a new medium to start afresh. Even then, Rushdi’s demand and popularity was still there with the music directors. He opened a music academy in order to teach music and playback singing to youngsters. Ahmed Rushdi never faced downfall as far as his singing career is concerned.

Until the 1970s, Rushdi was one of the leading voices in the subcontinent. He recorded fewer songs in his last years on the advice of doctors.

Since 1976, Ahmed Rushdi was a heart patient and his doctors advised him to abstain from singing but Rushdi refused by saying that music was his life. When he had a second heart attack in 1981, he was composing a musical album in the voice of singer Mujeeb Aalam. On the night of 11 April 1983, he had a third heart attack. He was immediately taken to the hospital but pronounced dead by the doctors. He was 48. Rushdi was buried at Sakhi Hassan Graveyard, Karachi. His last non film song was “Aaney walo suno” which was a duet with Mehnaz.

On his death, actor Waheed Murad said. “Today I have lost my voice.” He further said in an interview, “Sometimes I think that if I suddenly disappear or am no more for any reason, I would like to be remembered by the song ‘Bhooli hui hoon dastaan, guzra hua khayal hoon-Jisko na tum samajh sakay mien aisa aik sawal hoon’.” (I’m a tale forgotten, a thought bygone. I’m the question which you couldn’t understand) which was also picturised on him in 1967 and sung by Ahmed Rushdi. After Rushdi’s death, Waheed Murad as well as other friends and singers had appeared on a show to pay him a tribute; many of those same people appeared on the show six months later, reminiscing about Waheed as he also died.