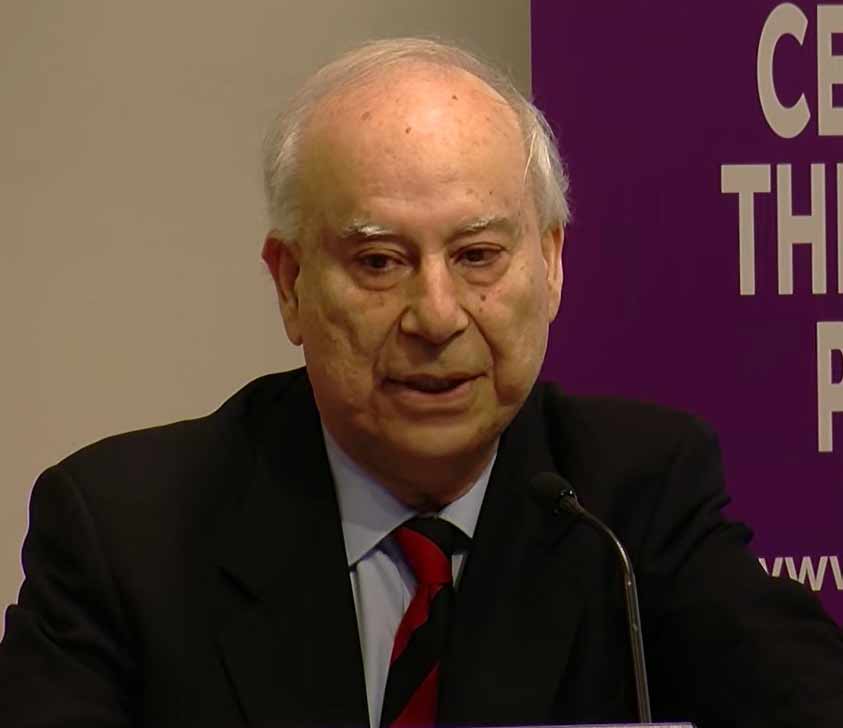 Akbar Salahuddin Ahmed, (born. 15 January 1943) is a Pakistani-American academic, author, poet, playwright, filmmaker and former diplomat. He currently holds the Ibn Khaldun Chair of Islamic Studies and is Professor of International Relations at the American University in Washington, D.C. A former Pakistani High Commissioner to the UK and Ireland, Ahmed was a member of the Civil Service of Pakistan and served as Political Agent in South Waziristan Agency and Commissioner in Baluchistan. He also served as the Iqbal Fellow (Chair of Pakistan Studies) at the University of Cambridge as well as holding teaching positions at Harvard, Princeton, and the U.S. Naval Academy. An anthropologist and scholar of Islam, he received his PhD from the School of Oriental and African Studies in London. He has been called “the world’s leading authority on contemporary Islam” by the BBC.

Ahmed received the Tamgha-i-Imtiaz (Medal of Excellence) and Sitara-i-Imtiaz (Star of Excellence) from the Pakistani government for academic distinction and the Sir Percy Sykes Memorial Medal by the Royal Society for Asian Affairs in London. He was also awarded the inaugural Purpose Prize in 2006 alongside Judea Pearl and is frequently named in the annual book, The Muslim 500: The World’s 500 Most Influential Muslims, and was named a 2015 Global Thought Leader by The World Post and the Gottlieb Duttweiler Institute.

Civil service and academia
He studied at Burn Hall School (now Army Burn Hall College) in Abbottabad from 1954 to 1959. Ahmed entered the Pakistani civil service in 1966. He graduated from the University of the Punjab and University of Birmingham and later attended Cambridge University doing an MA. In 1978, Ahmed graduated with a Ph.D. in Anthropology at the School of Oriental and African Studies, University of London. At certain points in his life Ahmed held important government positions such as Political Agent for the South Waziristan Agency/northwest Frontier Province (1978-1980) and in Baluchistan was Commissioner for the three districts (1982-1988) and Commissioner of the Sibi Division (1989). Ahmed was the founder and served as Director of the National Centre for Rural Development in Islamabad and also a Director of the Centre for Social Sciences and Humanities, University Grants Commission in Pakistan. In 1988 Ahmed became the Allama Iqbal Fellow at Selwyn College, Cambridge for five years and by 1993 he was appointed as the first Muslim Fellow. He also was the first Pakistani to serve on the Council of the Royal Anthropological Institute of Great Britain and Ireland.

Akbar Ahmed has held professorships at several North American educational institutions. At Princeton University he taught there and served as a Visiting Professor at the Institute for Advanced Study in Princeton. He also taught at Harvard University and was a Visiting Scholar at the Department of Anthropology. Ahmed was the First Chair of the Middle East and Islamic Studies at the US Naval Academy, Annapolis, and a Nonresident Senior Fellow at the Brookings Institution. In 2004 Ahmed was named District of Columbia Professor of the Year by the Carnegie Foundation for the Advancement of Teaching and the Council for Advancement and Support of Education. He also taught at the Quaid-i-Azam University in Pakistan.

In 1999-2000 Ahmed served as Pakistani High Commissioner (ambassador) to the United Kingdom, however, was recalled back to Islamabad after 8 months of service and thought it had to do with his comments about the views of Muhammad Ali Jinnah on Islam. During this time he finished four projects called the Jinnah Quartet which was a scholarly study, graphic novel, feature film, and a documentary film all named after the first Pakistani Governor-General Muhammad Jinnah in commemoration of the 50th anniversary of Pakistan’s founding. Ahmed’s four-part project series on Jinnah has won many international awards.

Research interests and literary works
Ahmed’s research interests focus on Pashtuns and others including tribal groups, Muslim society, and development anthropology. He has conducted anthropological fieldwork with Pashtuns in Afghanistan, undertaken comparative studies of Islamic social customs in Morocco, Pakistan and Saudi Arabia and researching global Islam alongside its impacts on contemporary society. Among his works on Pashtuns are Millennium and charisma among Pathans (1976) and his wide-ranging study The Thistle and the Drone (2013) that focuses on Muslim hill peoples in Pakistan, Yemen, North Africa and afar as the Philippines which examines US drone operations in the Muslim world, its subsequent consequences, and reputation of the USA being considered synonymous with the drone. Ahmed has criticized some anthropologists for studying “Muslim groups without reference to the Islamic framework”.[16] Other areas of research interest include Modernity and Muslims along with Islam and the concept of postmodernism in relation to Muslim societies, cultures, media, and the West.

Ahmed has co-edited several books with other academics. He has authored many articles and more than a dozen books that have won awards such as Discovering Islam which became the basis for a six-part BBC TV series called Living Islam. Other books are Postmodernism and Islam: Predicament and Promise which was nominated for an Amalfi Award and Islam Today: A short introduction to the Muslim world was awarded by the Los Angeles Times as the best non-fiction book of the year. Ahmed has written a biography of Muhammad Jinnah, Pakistan’s first Governor-General. and a study Journey into America: The challenge of Islam based on fieldwork with American Muslims. He has also written plays like Noor and The trial of Dara Shikoh which have been published and staged for audiences. Ahmed’s publications have been translated into other languages such as Indonesian and Chinese. Functioning between both worlds, through his writing and broadcasting Ahmed has attempted to bridge the Muslim-West world divide and encourage communication between both groups. He has expressed admiration of English translations of Islamic classics in assisting him to “discover the riches” of “Islamic cultural legacy” and “appreciate critically the beneficial impact of the West”.

Interfaith dialogue
In the aftermath of 9/11, Ahmed initiated a series of studies that were published by the Brookings Institution Press covering issues regarding relations between Islam and the West. Ahmed has been engaged in a series of public interfaith dialogues across the US and abroad with Professor Judea Pearl, father of deceased reporter Daniel Pearl focusing on divisions between Muslims and the West and between Jews and Muslims. For their efforts, he and Pearl were awarded the first Purpose Prize by the Interfaith Conference of Metropolitan Washington at the National Cathedral and Ahmed received the Herschel-King award for Interfaith Activism. He has also been appointed as a Trustee of the World Faiths Development Dialogue by the Archbishop of Canterbury and has received the 2002 Free Speech Award from the Muslim Public Affairs Council based in Washington DC. Ahmed has received accusations of being “a Zionist conspirator” and close to the West however he has felt that “dialogue, harmony, communication and debate” are for Islam and the West the key issues of engagement.

Ahmed has been interviewed by the BBC, PBS, NPR, MSNBC, “Think Tank,” NBC Nightly News, CNN, CBS, Fox News, and other media organizations. In addition to The Daily Show and The O’Reilly Factor, he has made several appearances on the Oprah Winfrey Show.

He has also served as an advisor to President George W. Bush and Prince Charles on Islam. Ahmed has given lectures worldwide in places such as the US Congressional retreat in Greenbrier, West Virginia, the National Defense University in Washington DC, the State Department, and the House of Lords in London.