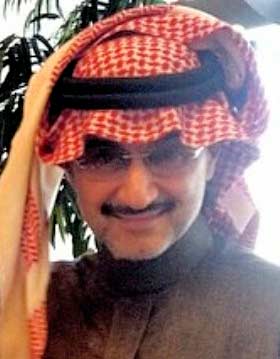 He is the founder, chief executive officer and 95 percent owner of the Kingdom Holding Company, a company with investments in companies in the financial services, tourism and hospitality, mass media, entertainment, retail, agriculture, petrochemicals, aviation, technology and real-estate sectors. In 2013, the company had a market capitalization of over $18 billion. Al-Waleed is Citigroup’s largest individual shareholder, the second-largest voting shareholder in 21st Century Fox, a minor shareholder in Zaveriwala Holdings LLC and owns Paris’ Four Seasons Hotel George V and part of the Plaza Hotel. Time has called him the “Arabian Warren Buffett”. In November 2017 Forbes listed Al-Waleed as the 7th-richest man in the world with a net worth of $39.8 billion.

On 4 November 2017, he and other prominent Saudis (including fellow billionaires Waleed bin Ibrahim Al Ibrahim and Saleh Abdullah Kamel) were arrested in Saudi Arabia, in a purge that the Saudi government characterized as an anti-corruption drive. The allegations against Prince Al-Waleed include money laundering, bribery, and extorting officials. Some of the detainees have been in the Ritz-Carlton, Riyadh since then. Al-Waleed was released from detention on 27 January 2018, following a financial settlement of some kind, after nearly three months in detention. In March 2018 he was dropped from the World’s Billionaires list due to lack of current information.

Al-Waleed was born in Jeddah on 7 March 1955 to Prince Talal bin Abdul-Aziz, long-time-known as The Red Prince, and Mona Al Solh, daughter of Riad Al Solh (Lebanon’s first prime minister). His father was Saudi Arabia’s finance minister during the early 1960s, before he went into exile due to his advocacy for political reform. Al-Waleed’s grandmother was Munaiyir, an Armenian whose family escaped the Armenian Genocide. She was presented by the emir of Unayzah to Ibn Saud in 1921, when she was 12 years old and Ibn Saud was 45.

Al-Waleed’s parents separated when he was seven, and he lived with his mother in Lebanon. He first attended Pinewood College in Beirut. As a boy, he ran away from home for a day or two at a time (sleeping in unlocked cars) before attending military school in Riyadh, the King Abdul Aziz Military Academy. In 1974, he returned to Lebanon, attending the Choueifat School and then Manor School Al-Waleed received a bachelor’s degree in business administration from Menlo College in California in 1979, finishing in two-and-a-half years, and a master’s degree with honors in social science from the Maxwell School of Citizenship and Public Affairs at Syracuse University in 1985, finishing in eleven months.

Eisenhower Award for Innovation. He received the Bahrain Medal of the First Order, the country’s highest honorary medal in late May 2012. He received the Nepalese third-order Mahaujjval Rastradip Manpadvi, the highest award bestowed on a foreigner, and Guinea-Bissau’s Colina De Boe Medal in August 2012. In June 2013 al-Waleed was made Grand Commander of the Order of the Republic of Sierra Leone (GCRSL), the country’s highest honour. On 13 December 2014, he was made an Honorary Companion of the National Order of Merit of the Republic of Malta.