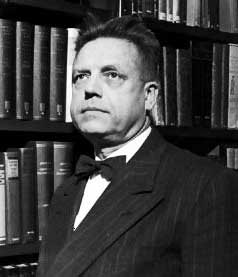 Alfred Charles Kinsey (/ˈkɪnzi/; June 23, 1894 – August 25, 1956) was an American biologist, professor of entomology and zoology, and sexologist who, in 1947, founded the Institute for Sex Research at Indiana University, previously known as the Kinsey Institute for Research in Sex, Gender, and Reproduction. He is best known for writing Sexual Behavior in the Human Male (1948) and Sexual Behavior in the Human Female (1953), also known as the Kinsey Reports, as well as the Kinsey scale. Kinsey’s research on human sexuality, foundational to the field of sexology, provoked controversy in the 1940s and 1950s. His work has influenced social and cultural values in the United States as well as internationally.

Alfred Kinsey was born on June 23, 1894, in Hoboken, New Jersey, the son of Sarah Ann (née Charles) and Alfred Seguine Kinsey. He was the eldest of three children. His mother received little formal education; his father was a professor at Stevens Institute of Technology.

Kinsey’s parents were poor for most of his childhood, often unable to afford proper medical care. This may have led to a young Kinsey receiving inadequate treatment for a variety of diseases including rickets, rheumatic fever, and typhoid fever. His health records indicate that Kinsey received suboptimal exposure to sunlight (often the cause of rickets, before milk and other foods were fortified with vitamin D) and lived in unsanitary conditions for at least part of his childhood. Rickets led to a curvature of the spine, which resulted in a slight stoop that prevented Kinsey from being drafted in 1917 for World War I.

Kinsey’s parents were devout Christians. His father was known as one of the most devout members of the local Methodist church. Most of Kinsey’s social interactions were with other members of the church, often as a silent observer, while his parents discussed religion.[3] Kinsey’s father imposed strict rules on the household, including mandating Sunday as a day of prayer and little else.

At age 10, Kinsey moved with his family to South Orange, New Jersey. Also at a young age, he showed great interest in nature and camping. He worked and camped with the local YMCA throughout his early years, and enjoyed these activities to such an extent that he intended to work for the YMCA after completing his education. Kinsey’s senior undergraduate thesis for psychology, a dissertation on the group dynamics of young boys, echoed this interest. He joined the Boy Scouts when a troop was formed in his community. His parents strongly supported this (and joined as well) because the Boy Scouts was an organization that was based on the principles of Christianity. Kinsey worked his way up through the Scouting ranks to earn Eagle Scout in 1913, making him one of the earliest Eagle Scouts.[4] Despite earlier disease having weakened his heart, Kinsey followed an intense sequence of difficult hikes and camping expeditions throughout his early life.

In high school, Kinsey was a quiet but hard-working student. While attending Columbia High School, he devoted his energy to academic work and playing the piano. At one time, Kinsey had hoped to become a concert pianist, but decided to concentrate on his scientific pursuits instead. Kinsey’s ability to spend immense amounts of time deeply focused on study was a trait that would serve him well in college and during his professional career. He seems not to have formed strong social relationships during high school, but earned respect for his academic ability. While there, Kinsey became interested in biology, botany and zoology. Kinsey was later to claim that his high school biology teacher, Natalie Roeth, was the most important influence on his decision to become a scientist.

Kinsey approached his father with plans to study botany at college. His father demanded that he study engineering at Stevens Institute of Technology instead. At Stevens, he primarily took courses related to English and engineering, but was unable to satisfy his interest in biology. Kinsey was not successful there, and decided engineering was not a field he was good at. At the end of two years at Stevens, Kinsey gathered the courage to confront his father about his interest in biology and his intent to continue studying at Bowdoin College in Brunswick, Maine, where he majored in biology.

The Kinsey Reports
Main article: Kinsey Reports
Kinsey is widely regarded as the first major figure in American sexology; his research is cited as having paved the way for a deeper exploration into sexuality among sexologists and the general public, as well as liberating female sexuality. For example, Kinsey’s work disputed the notions that women generally are not sexual and that female orgasms experienced vaginally are superior to clitoral orgasms. He initially became interested in different forms of sexual practices in 1933, after discussing the topic extensively with a colleague, Robert Kroc. Kinsey had been studying the variations in mating practices among gall wasps. During this time, he developed a scale measuring sexual orientation, now known as the Kinsey scale, which ranges from 0 to 6, where 0 is exclusively heterosexual and 6 is exclusively homosexual; a rating of X for “no socio-sexual contacts or reactions” was later added.

In 1935, Kinsey delivered a lecture to a faculty discussion group at Indiana University, his first public discussion of the topic, wherein he attacked the “widespread ignorance of sexual structure and physiology” and promoted his view that “delayed marriage” (that is, delayed sexual experience) was psychologically harmful. Kinsey obtained research funding from the Rockefeller Foundation, which enabled him to further study human sexual behavior. He published Sexual Behavior in the Human Male in 1948, followed in 1953 by Sexual Behavior in the Human Female, both of which reached the top of the bestseller lists and turned Kinsey into a celebrity. These publications later became known as the Kinsey Reports. Articles about him appeared in magazines such as Time, Life, Look, and McCall’s. The Kinsey Reports, which led to a storm of controversy, are regarded by many as a precursor to the sexual revolution of the 1960s and 1970s.

Controversial aspects
Kinsey’s research went beyond theory and interview to include observation of and participation in sexual activity, sometimes involving co-workers. Kinsey justified this sexual experimentation as being necessary to gain the confidence of his research subjects. He encouraged his staff to do likewise, and to engage in a wide range of sexual activity, to the extent that they felt comfortable; he argued that this would help his interviewers understand the participants’ responses. Kinsey filmed sexual acts which included co-workers in the attic of his home as part of his research; Biographer Jonathan Gathorne-Hardy explains that this was done to ensure the films’ secrecy, which would have caused a scandal had it become public knowledge. James H. Jones, author of Alfred C. Kinsey: A Public/Private Life, and British psychiatrist Theodore Dalrymple, among others, have speculated that Kinsey was driven by his own sexual needs.

Some of the data published in the two Kinsey Reports books is controversial in the scientific and psychiatric communities, due to Kinsey’s decision to interview volunteers who may not have been representative of the general population. University of Chicago sociology professor Edward Laumann also argued that Kinsey’s work was focused on the biology of sex and lacked psychological and clinical information and analysis.

Kinsey collected sexual material from around the world, which brought him to the attention of U.S. Customs when they seized some pornographic films in 1956; he died before this matter was resolved legally. Kinsey wrote about pre-adolescent orgasms using data in tables 30 to 34 of the male volume, which report observations of orgasms in over three-hundred children aged from two months up to fifteen years. This information was said to have come from adults’ childhood memories, or from parent or teacher observation. Kinsey said he also interviewed nine men who had sexual experiences with children, and who told him about the children’s responses and reactions. Little attention was paid to this part of Kinsey’s research at the time, but where Kinsey had gained this information began to be questioned nearly 40 years later. It was later revealed that Kinsey used data from a single pedophile and presented it as being from various sources. Kinsey had seen the need for participant confidentiality and anonymity as necessary to gain “honest answers on such taboo subjects”. Years later, the Kinsey Institute said that the data on children in tables 31–34 came from one man’s journal (started in 1917) and that the events concerned predated the Kinsey Reports.

Jones wrote that Kinsey’s sexual activity influenced his work, that he over-represented prisoners and prostitutes, classified some single people as “married”, and that he included a disproportionate number of homosexual men, which may have distorted his studies. While he has been criticized for omitting African-Americans from his research, his report on the human male includes numerous references to African-American participants. Historian Vern Bullough writes that the data was later reinterpreted, excluding prisoners and data derived from an exclusively gay sample, and the results indicate that it does not appear to have skewed the data. Kinsey may have over-represented homosexuals, but Bullough considers that this may have been because homosexual behavior was stigmatized and needed to be better understood. Paul Gebhard, who was Kinsey’s colleague from 1946 to 1956 and who also succeeded Kinsey as Director of the Kinsey Institute following his death, attempted to justify Kinsey’s work in the 1970s by removing some of the suspect data where Kinsey allegedly showed a bias towards homosexuality. After Gebhard recalculated the findings in Kinsey’s work, he found only slight differences between the original and updated figures.

Bailey et al., in their 2016 review of the sexual orientation literature, stated that Kinsey’s survey likely overestimated the frequencies of nonheterosexual attractions and expressions.