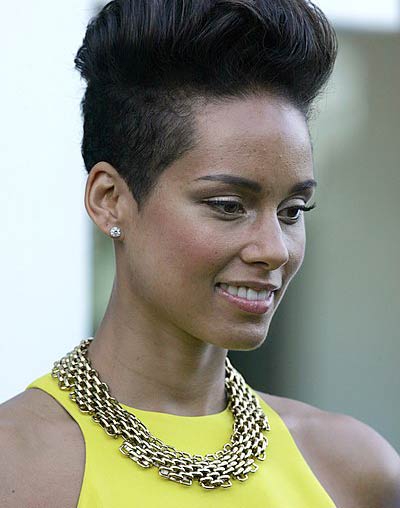 Alicia Augello Cook (born January 25, 1981), known professionally as Alicia Keys, is an American musician, singer, songwriter, actress and philanthropist. A classically-trained pianist, Keys began composing songs by age 12 and was signed at 15 years old by Columbia Records. After disputes with the label, she signed with Arista Records, and later released her debut album, Songs in A Minor, with J Records in 2001. The album was critically and commercially successful, producing her first Billboard Hot 100 number-one single “Fallin'” and selling over 16 million copies worldwide. The album earned Keys five Grammy Awards in 2002. Her second album, The Diary of Alicia Keys (2003), was also a critical and commercial success, spawning successful singles “You Don’t Know My Name”, “If I Ain’t Got You”, and “Diary”, and selling eight million copies worldwide. The album garnered her an additional four Grammy Awards. Her duet “My Boo” with Usher became her second number-one single in 2004. Keys released her first live album, Unplugged (2005), and became the first woman to have an MTV Unplugged album debut at number one.

Her third album, As I Am (2007), produced the Hot 100 number-one single “No One”, selling 7 million copies worldwide and earning an additional three Grammy Awards. In 2007, Keys made her film debut in the action-thriller film Smokin’ Aces. She, along with Jack White, recorded “Another Way to Die” (the title song to the 22nd official James Bond film, Quantum of Solace). Her fourth album, The Element of Freedom (2009), became her first chart-topping album in the UK, and sold 4 million copies worldwide. In 2009, Keys also collaborated with Jay Z on “Empire State of Mind”, which became her fourth number-one single and won the Grammy Award for Best Rap/Sung Collaboration. Girl on Fire (2012) was her fifth Billboard 200 topping album, spawning the successful title track, and won the Grammy Award for Best R&B Album. In 2013, VH1 Storytellers was released as her second live album. Her sixth studio album, Here (2016), became her seventh US R&B/Hip-Hop chart-topping album. Her seventh studio album, Alicia, is scheduled to be released in 2020.

Keys has received numerous accolades in her career, including 15 competitive Grammy Awards, 17 NAACP Image Awards, 12 ASCAP Awards, and an award from the Songwriters Hall of Fame and National Music Publishers Association. She has sold over 65 million records worldwide and was named by Billboard the top R&B artist of the 2000s decade. She placed tenth on their list of Top 50 R&B/Hip-Hop Artists of the Past 25 Years. VH1 included her on their 100 Greatest Artists of All Time and 100 Greatest Women in Music lists, while Time has named her in their 100 list of most influential people in 2005 and 2017. Keys is also acclaimed for her humanitarian work, philanthropy and activism; she co-founded and serves as the Global Ambassador of the nonprofit HIV/AIDS-fighting organization Keep a Child Alive.

Alicia Augello Cook was born on January 25, 1981, in the Hell’s Kitchen neighborhood of New York City’s Manhattan borough. She is the only child of Teresa Augello, who was a paralegal and part-time actress, and one of three children of Craig Cook, who was a flight attendant. Keys’ father is African American and her mother is of Italian descent; her maternal grandparents came from Sciacca in Sicily. Keys states she also has some Scottish or Irish ancestry. Named after her Puerto Rican godmother, Keys expressed that she was comfortable with her multiracial heritage because she felt she was able to “relate to different cultures”. Keys’ father left when she was two and she was subsequently raised by her mother during her formative years in Hell’s Kitchen. Keys said her parents never had a relationship, and her father was not in her life. Although she did not like to speak about her father in order to not feed stereotypes, Keys remarked in 2001: “I’m not in contact with him. That’s fine. When I was younger, I minded about that. [It] made me angry. But it helped show me what a strong woman my mother was, and made me want to be strong like her. Probably, it was better for me this way.” Keys and her mother lived in a one-room apartment. Her mother often worked three jobs to provide for Keys, who “learned how to survive” from her mother’s example of tenacity and self-reliance.

From a young age, Alicia struggled with self-esteem issues, “hiding” little by little when her differences made her vulnerable to judgement, and later uninvited sexual attention. Living in the rough neighborhood of Hell’s Kitchen, she was, from an early age, regularly exposed to street violence, drugs, prostitution, and subjected to sexual propositions in the sex trade- and crime-riddled area. “I saw a variety of people growing up, and lifestyles, lows and highs. I think it makes you realise right away what you want and what you don’t want”, Keys said. Keys recalled feeling fearful early on of the “animal instinct” she witnessed, and eventually feeling “high” due to recurrent harassment. Her experiences in the streets had led her to carry a homemade knife for protection. She became very wary, emotionally guarded, and she began wearing gender-neutral clothing and what would become her trademark cornrows. Keys explained that she is grateful for growing up where she did as it prepared her for the parallels in the music industry, particularly as she was a teenager starting out; she could maintain a particular focus and not derail herself. She credits her “tough” mother for anchoring her on a right path as opposed to many people she knew who ended up on the wrong path and in jail. Keys attributed her unusual maturity as a young girl to her mother, who depended on her to be responsible while she worked to provide for them and give Keys as many opportunities as possible.

Keys loved music and singing from early childhood. She recalled her mother playing jazz records of artists like Thelonious Monk, Billie Holiday, Ella Fitzgerald and Louis Armstrong on Sunday mornings, early musical moments Keys considers influential in kindling her interest in and emotional connection to music. In preschool, Keys sang in her school’s production of the musical Cats and was cast as Dorothy Gale in a production of The Wizard of Oz. Keys discovered she had a passion for the piano by age six, as she loved the sound and feel of the instrument and desired to play and learn it. A friend had given her an old, upright piano, a pivotal gift for Keys as it allowed her to play and take lessons as a child. Keys began receiving classical piano training by age seven, practicing six hours a day, learning the Suzuki method and playing composers such as Beethoven, Mozart, Chopin, and Satie. She was particularly drawn to “blue, dark, shadowy” and melancholic compositions, as well as the passionate romanticism of “blue composers” like Chopin. Inspired by the film Philadelphia, Keys wrote her first song about her departed grandfather on her piano by age 12. The scene in the film where Tom Hanks’s character listens to opera on a record player notably affected Keys, who “never showed emotion very well”. After seeing the film, Keys, “for the first time, could express how [she] felt through the music.”

Keys enrolled in the Professional Performing Arts School at the age of 12, where she took music, dance, and theater classes and majored in choir. In her preteen years, Keys and her bass-playing friend formed their first group, though neither “knew too much about how pop songs worked”. Keys would continue singing, writing songs, and performing in musical groups throughout junior high and high school. She became an accomplished pianist, and after her classical music teacher had nothing left to teach her, she began studying jazz at age 14. Living in the “musical melting pot” city, Keys had already been discovering other genres of music, including soul music, hip hop, R&B, and taken affinity to artists like Marvin Gaye and Curtis Mayfield. Keen on dissecting music, Keys continued developing her songwriting and finding her own ‘flow and style” through her exploration of the intricacies in different music.

Keys spent more time in Harlem during her teenage years. She connected with the cultural and racial diversity in the neighborhood, where she expanded upon her musical exploration, and her character was also solidified. “Harlem raised me in a lot of ways,” Keys remarked. “[It] taught me how to think fast, how to play the game…taught me leadership, how to get out of bad situations when you need to, how to hold my own.” During this period, she met her friend and future collaborator Kerry Brothers Jr.

Keys had a low-profile relationship with her long time friend and collaborator Kerry Brothers Jr. until 2008. Keys later dated hip hop artist-producer Swizz Beatz. Keys and Beatz, who have known each other since they were teenagers, announced they were engaged and expecting their first child in May 2010. They held a Zulu ceremony to bless their unborn child in the Illovo suburb of Johannesburg, South Africa, during the 2010 FIFA World Cup. They were married on July 31, 2010 in a private ceremony near the Mediterranean Sea. Keys gave birth to son Egypt Daoud Dean in October 2010. She gave birth to their second son, Genesis Ali Dean, in December 2014.