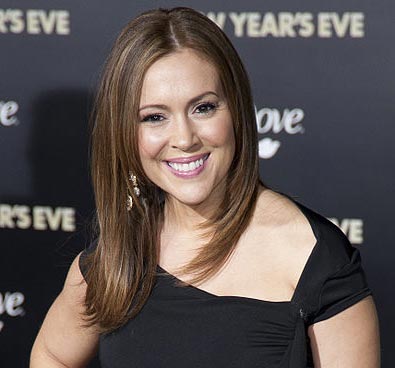 Alyssa Jayne Milano (born December 19, 1972) is an American actress, producer and political activist. She is known for her roles as Samantha Micelli in Who’s the Boss?, Jennifer Mancini in Melrose Place, Phoebe Halliwell in Charmed, Billie Cunningham in My Name is Earl, Savannah “Savi” Davis in Mistresses, Renata Murphy in Wet Hot American Summer: 10 Years Later and Coralee Armstrong in Insatiable.
Milano was born on December 19, 1972, in Bensonhurst, Brooklyn, the daughter of fashion designer and talent manager Lin Milano and film-music editor Thomas M. Milano. She and her brother, Cory, who is a decade her junior, are of Italian ancestry. She was raised Roman Catholic.

In the late 1980s, Milano contacted Ryan White, a schoolboy ostracized for having AIDS, and a fan of hers. She attended a big party for him where she sat with him for six hours making friendship bracelets. They appeared together on The Phil Donahue Show, where Milano kissed White, in order to show that she could not catch the disease through casual contact with him.

In October 2004, Milano participated in UNICEF’s “Trick or Treat” campaign as the national spokesperson. She raised approximately US$50,000 for South African women and children with AIDS by selling her own and schools’ photo work.

In support of PETA, she appeared in a 2007 advertisement for them, advocating vegetarianism, in a dress made entirely of vegetables.

In June 2007, The Sabin Vaccine Institute, named Milano a Founding Ambassador for the Global Network for Neglected Tropical Diseases, an alliance formed to advocate and mobilize resources in the fight to control neglected tropical diseases (NTDs), to which Milano donated US$250,000. She is also a UNICEF Goodwill Ambassador for the United States of America, Her field work for the organization has included a 2004 trip to Angola to speak with HIV-positive women and people disfigured by land mines during the country’s civil war; a trip to India to meet displaced mothers living in squalor following the 2004 tsunami; and a 2010 trip to the settlement of Kolonia in western Kosovo to witness impoverished living conditions. Milano wrote on her blog that the latter trip was “the hardest experience I’ve had on a field visit”, and described a waste dump close to the settlement where children spent time looking for metal to sell or scavenging for food.

For her 37th birthday, which occurred on December 19, 2009, Milano ran an online fundraising campaign for Charity: Water. Her original goal was to raise US$25,000, but a donation from her husband put her over the US$75,000 mark on December 18. The fundraiser ran until December 26. In September 2013, Milano released a viral tape on Funny or Die that drew attention to the Syrian civil war.

In 2015, Milano endorsed Bernie Sanders for President of the United States. In 2016 after the Democratic Party presidential primaries, she expressed her support for presidential candidate Hillary Clinton. She was also involved in get-out-the-vote efforts for Rob Quist.

On October 15, 2017, Milano posted the message which re-launched what is known as the #MeToo movement, which was started in 2006 by Tarana Burke. According to Milano, a friend suggested that she post a message on her Twitter account encouraging survivors of sexual harassment and assault to post #metoo as a status update. This was to gauge the widespread problem of sexual misconduct. She was inspired to bring awareness to the commonality of sex crimes among women in the wake of Harvey Weinstein’s expulsion from the Academy of Motion Picture Arts and Sciences for alleged sex crimes against women in the film industry. Milano emphasized that the basis of her hashtag was to create a platform where women had an “opportunity without having to go into detail about their stories if they did not want to”.

Since 2004, Milano has canvassed for national, state, and local candidates.

Milano phone banked with Piper Perabo and drove people to the polls for the United States Senate special election in Alabama, 2017 on December 12, 2017, to vote for Democratic candidate Doug Jones.

Milano, with actor Christopher Gorham, drove voters to the polls during early voting and on March 27, 2017, for Georgia’s 6th congressional district 2017 special election for Jon Ossoff, and she later posted photos of herself with the voters on Instagram. Milano and Gorham had been in the area for the pilot of Insatiable.

In 2018, she was announced as a co-chair of the Health Care Voter campaign. She released an op-ed to Time magazine on why health care will decide her vote in 2018.

Milano, who spoke at the 2018 Women’s March, refused to participate in 2019, citing the failure of 2019 Women’s March leaders Tamika Mallory and Linda Sarsour to condemn the homophobia, antisemitism, and transphobia of Nation of Islam leader Louis Farrakhan.

In May 2019, Milano advocated celibacy in the form of a sex strike in retaliation of a recently passed abortion law in the U.S. state of Georgia.

In March 2020, Milano endorsed former US vice president Joe Biden for President of the United States. She has declined to withdraw her endorsement of Biden despite sexual assault allegations against him. On April 27, Milano tweeted that she was “aware of the new developments in Tara Reade’s accusation against Joe Biden. I want Tara, like every other survivor, to have the space to be heard and seen without being used as fodder. I hear and see you, Tara.”[100] This was after criticism of Milano’s support for Biden where she appeared to backtrack on her previous stance for believing women. On April 28, in an op-ed for Deadline Milano reiterated her support for Biden and considered “Believing women was never about ‘Believe all women no matter what they say,’ it was about changing the culture of NOT believing women by default.”

Milano has dyslexia. In a 2004 interview, she explained how she deals with the disorder:

I’ve stumbled over words while reading from teleprompters. Sir John Gielgud, whom I worked with on The Canterville Ghost years ago, gave me great advice. When I asked how he memorized his monologues, he said, “I write them down.” I use that method to this day. It not only familiarizes me with the words, it makes them my own.

Milano was involved with The Lost Boys actor Corey Haim from 1987 to 1990. Milano and her parents, together with his manager at the time, unsuccessfully tried to get Haim help for his addiction.

In 1993, Milano became engaged to actor Scott Wolf, but they broke off their engagement the following year.

After a year of dating, Milano became engaged to Creative Artists Agency agent David Bugliari in December 2008. They married on August 15, 2009, at Bugliari’s family home in New Jersey. Milano and Bugliari have a son, born in August 2011, and a daughter, born in September 2014.

Milano moved from a condominium in West Hollywood to a house in Bell Canyon, California, with land for nine horses, eight chickens, two rabbits, and five dogs.

In August 2019, Milano revealed that she had undergone two abortions in 1993 while in a relationship with actor Scott Wolf. Milano used birth control but became pregnant nonetheless.

In 1998, Milano sued adult websites for unauthorized use of nude images from her films.

Milano’s 2017 US$10-million lawsuit against her business manager resulted in a cross-complaint.