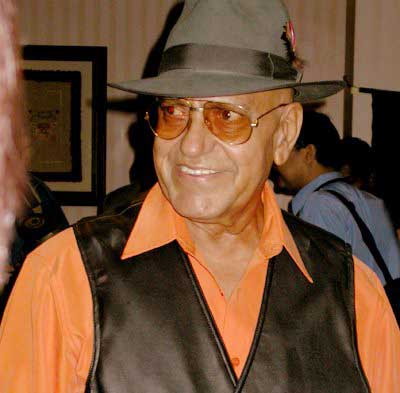 Amrishlal Puri (22 June 1932 – 12 January 2005) was an Indian actor, who was an important figure in Indian theatre and cinema. He worked with notable playwrights of the time, such as Satyadev Dubey and Girish Karnad. He is remembered for playing iconic villainous roles in Hindi cinema as well as other Indian and international film industries. To Indian audiences he is the most remembered for his role as Mogambo in Shekhar Kapur’s Hindi film Mr. India (1987), and to Western audiences he is best known as Mola Ram in Steven Spielberg’s Hollywood film Indiana Jones and the Temple of Doom (1984). Puri has won three Filmfare Awards for Best Supporting Actor.

Amrish Puri was born in Nawanshahr, Jalandhar, Punjab to a Punjabi-speaking Khatri family of Nihal Chand Puri and Ved Kaur. He had four siblings, elder brothers Chaman Puri and Madan Puri (both of whom were also actors), elder sister Chandrakanta, and a younger brother, Harish Puri. He was the first cousin of the actor and singer K. L. Saigal.

Amrish Puri acted in more than 400 films between 1967 and 2005, and was one of the most successful villains in Bollywood. Puri first came to Mumbai following the footsteps of his elder brothers- Madan Puri and Chaman Puri, who were already established actors known for playing villainous roles. He failed his first screen test, and instead found a job with the Employees’ State Insurance Corporation Ministry of Labour and Employment (ESIC). At the same time, he started performing at the Prithvi Theatre in plays written by Satyadev Dubey. He eventually became well known as a stage actor and won the Sangeet Natak Akademi Award in 1979. This theatre recognition soon led to work in television ads and eventually to films at the relatively late age of 40.

Puri went on to work in Hindi, Kannada, Marathi, Hollywood, Punjabi, Malayalam, Telugu and Tamil films. Though he was successful in many regional films, he is best known for his work in Bollywood cinema.

Puri reigned supreme in villainous roles in the 1980s and 1990s. In those decades, there was hardly any Bollywood film that did not feature Puri as a villain. His dominating screen presence and baritone voice made him stand out amongst the other villains of the day.

He is known to international audiences for his roles as khan in Richard Attenborough’s Gandhi (1982) and as the main antagonist Mola Ram in Steven Spielberg’s Indiana Jones and the Temple of Doom (1984). He shaved his head for the role, and it created such an impression that he kept his head shaved. His bald look gave him the flexibility to experiment with different looks as a villain in subsequent movies. Puri and Spielberg shared a great rapport and Spielberg often said in interviews: “Amrish is my favorite villain. The best the world has ever produced and ever will!”

In villainous roles, Puri is best remembered as “Mogambo” in Mr. India, “Jagavar” in Vidhaata, “Thakral” in Meri Jung, “Bhujang” in Tridev, “Balwant Rai” in Ghayal, Barrister Chadda in Damini and “Thakur Durjan Singh” in Karan Arjun. His comic role in Chachi 420, that he acted alongside Kamal Haasan was highly appreciated.

Since the 1990s until his death in 2005, Puri also featured in positive supporting roles in many movies. Some of his notable positive roles are Dilwale Dulhaniya Le Jayenge, Phool Aur Kaante, Gardish, Pardes, Virasat, Ghatak and China Gate. He received the Filmfare Best Supporting Actor award for Meri Jung and Virasat.

Amrish Puri was suffering from myelodysplastic syndrome, a rare kind of blood cancer, and had undergone some brain invasive surgery for his condition after he was admitted to the Hinduja hospital on 27 December 2004. His condition required frequent removal of the blood accumulated in the cerebral region of the brain and after some time he slipped into a coma shortly before his death around 7:30 a.m on 12 January 2005.

His body was brought to his residence for people to pay their last respects, and his funeral was on 13 January 2005 at Shivaji Park crematorium.