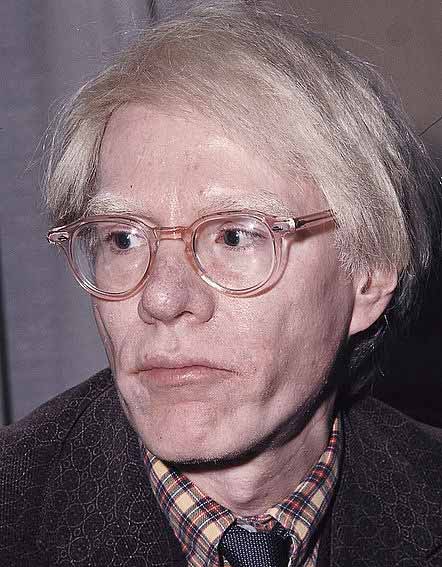 Andy Warhol (born Andrew Warhola; August 6, 1928 – February 22, 1987) was an American artist, film director, and producer who was a leading figure in the visual art movement known as pop art. His works explore the relationship between artistic expression, advertising, and celebrity culture that flourished by the 1960s, and span a variety of media, including painting, silkscreening, photography, film, and sculpture. Some of his best known works include the silkscreen paintings Campbell’s Soup Cans (1962) and Marilyn Diptych (1962), the experimental film Chelsea Girls (1966), and the multimedia events known as the Exploding Plastic Inevitable (1966–67).

Born and raised in Pittsburgh, Warhol initially pursued a successful career as a commercial illustrator. After exhibiting his work in several galleries in the late 1950s, he began to receive recognition as an influential and controversial artist. His New York studio, The Factory, became a well-known gathering place that brought together distinguished intellectuals, drag queens, playwrights, Bohemian street people, Hollywood celebrities, and wealthy patrons. He promoted a collection of personalities known as Warhol superstars, and is credited with inspiring the widely used expression “15 minutes of fame”. In the late 1960s he managed and produced the experimental rock band The Velvet Underground and founded Interview magazine. He authored numerous books, including The Philosophy of Andy Warhol and Popism: The Warhol Sixties. He lived openly as a gay man before the gay liberation movement. After gallbladder surgery, Warhol died of cardiac arrhythmia in February 1987 at the age of 58.

Warhol has been the subject of numerous retrospective exhibitions, books, and feature and documentary films. The Andy Warhol Museum in his native city of Pittsburgh, which holds an extensive permanent collection of art and archives, is the largest museum in the United States dedicated to a single artist. Many of his creations are very collectible and highly valuable. The highest price ever paid for a Warhol painting is US$105 million for a 1963 canvas titled Silver Car Crash (Double Disaster); his works include some of the most expensive paintings ever sold.[5] A 2009 article in The Economist described Warhol as the “bellwether of the art market”.

Warhol was homosexual. In 1980, he told an interviewer that he was still a virgin. Biographer Bob Colacello, who was present at the interview, felt it was probably true and that what little sex he had was probably “a mixture of voyeurism and masturbation—to use [Andy’s] word abstract”. Warhol’s assertion of virginity would seem to be contradicted by his hospital treatment in 1960 for condylomata, a sexually transmitted disease. It has also been contradicted by his lovers, including Warhol muse BillyBoy, who has said they had sex to orgasm: “When he wasn’t being Andy Warhol and when you were just alone with him he was an incredibly generous and very kind person. What seduced me was the Andy Warhol who I saw alone. In fact when I was with him in public he kind of got on my nerves….I’d say: ‘You’re just obnoxious, I can’t bear you.” Billy Name also denied that Warhol was only a voyeur, saying: “He was the essence of sexuality. It permeated everything. Andy exuded it, along with his great artistic creativity….It brought a joy to the whole art world in New York.” “But his personality was so vulnerable that it became a defense to put up the blank front.” Warhol’s lovers included John Giorno, Billy Name, Charles Lisanby, and Jon Gould. His boyfriend of 12 years was Jed Johnson, whom he met in 1968, and who later achieved fame as an interior designer.

The first works that Warhol submitted to a fine art gallery, homoerotic drawings of male nudes, were rejected for being too openly gay.[26] In Popism, furthermore, the artist recalls a conversation with the film maker Emile de Antonio about the difficulty Warhol had being accepted socially by the then-more-famous (but closeted) gay artists Jasper Johns and Robert Rauschenberg. De Antonio explained that Warhol was “too swish and that upsets them.” In response to this, Warhol writes, “There was nothing I could say to that. It was all too true. So I decided I just wasn’t going to care, because those were all the things that I didn’t want to change anyway, that I didn’t think I ‘should’ want to change … Other people could change their attitudes but not me”. In exploring Warhol’s biography, many turn to this period—the late 1950s and early 1960s—as a key moment in the development of his persona. Some have suggested that his frequent refusal to comment on his work, to speak about himself (confining himself in interviews to responses like “Um, no” and “Um, yes”, and often allowing others to speak for him)—and even the evolution of his pop style—can be traced to the years when Warhol was first dismissed by the inner circles of the New York art world.

Images of Jesus from The Last Supper cycle (1986). Warhol made almost 100 variations on the theme, which the Guggenheim felt “indicates an almost obsessive investment in the subject matter.”
Warhol was a practicing Ruthenian Catholic. He regularly volunteered at homeless shelters in New York City, particularly during the busier times of the year, and described himself as a religious person. Many of Warhol’s later works depicted religious subjects, including two series, Details of Renaissance Paintings (1984) and The Last Supper (1986). In addition, a body of religious-themed works was found posthumously in his estate.

During his life, Warhol regularly attended Liturgy, and the priest at Warhol’s church, Saint Vincent Ferrer, said that the artist went there almost daily, although he was not observed taking Communion or going to Confession and sat or knelt in the pews at the back. The priest thought he was afraid of being recognized; Warhol said he was self-conscious about being seen in a Roman Rite church crossing himself “in the Orthodox way” (right to left instead of the reverse).

His art is noticeably influenced by the Eastern Christian tradition which was so evident in his places of worship.

Warhol’s brother has described the artist as “really religious, but he didn’t want people to know about that because [it was] private”. Despite the private nature of his faith, in Warhol’s eulogy John Richardson depicted it as devout: “To my certain knowledge, he was responsible for at least one conversion. He took considerable pride in financing his nephew’s studies for the priesthood”.

Warhol was an avid collector. His friends referred to his numerous collections, which filled not only his four-story townhouse, but also a nearby storage unit, as “Andy’s Stuff.” The true extent of his collections was not discovered until after his death, when The Andy Warhol Museum in Pittsburgh took in 641 boxes of his “Stuff.”

Warhol’s collections included a Coca-Cola memorabilia sign, and 19th century paintings along with airplane menus, unpaid invoices, pizza dough, pornographic pulp novels, newspapers, stamps, supermarket flyers, and cookie jars, among other eccentricities. It also included significant works of art, such as George Bellows’s Miss Bentham. One of his main collections was his wigs. Warhol owned more than 40 and felt very protective of his hairpieces, which were sewn by a New York wig-maker from hair imported from Italy. In 1985 a girl snatched Warhol’s wig off his head. It was later discovered in Warhol’s diary entry for that day that he wrote: “I don’t know what held me back from pushing her over the balcony.”

In 1960, he had bought a drawing of a light bulb by Jasper Johns.

Another item found in Warhol’s boxes at the museum in Pittsburgh was a mummified human foot from Ancient Egypt. The curator of anthropology at Carnegie Museum of Natural History felt that Warhol most likely found it at a flea market.