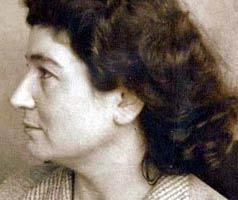 Anna Molka Ahmed (13 August 1917 – 20 April 1994) was a Pakistani artist and a pioneer of fine arts in the country after its independence in 1947. She was a professor of fine arts at the University of the Punjab in Lahore.

Anna Molka Ahmed was born Molly Bridger to Jewish parents, in London, England. Her mother was Polish and father was Russian. She converted to Islam at the age of 18 in 1935, before marrying Sheikh Ahmed in October 1939, who was then studying in London. She studied painting, sculpture and design at St. Martin School of Arts in London, and received a scholarship to the Royal Academy of Art.

In 1951, Anna divorced her husband, but remained in Pakistan with her two daughters until her death on 24 April 1994.

In her 55 year career, “she was well known as a painter of evocative landscapes, grand thematic figurative compositions and observant, insightful portraits. Her works are characterised by a signature impasto technique executed in a flamboyant, vivid palette.”

On 1 June 2020, Google celebrated her with a Google Doodle.