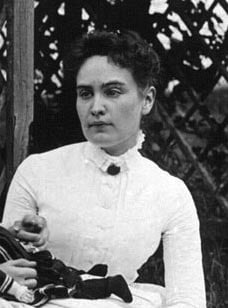 At the age of five, Sullivan contracted trachoma, an eye disease, which left her partially blind and without reading or writing skills. She received her education as a student of the Perkins School for the Blind; soon after graduation at age 20, she became a teacher to Keller.

Sullivan was born on April 14, 1866, in Feeding Hills, Agawam, Massachusetts. According to her baptismal certificate, her name at birth was Johanna Mansfield Sullivan; however, she was called Anne or Annie from birth. She was the oldest child of Thomas and Alice (Cloesy) Sullivan, who emigrated to the United States from Ireland during the Great Famine.

When she was five years old, Sullivan contracted a bacterial eye disease known as trachoma, which caused many painful infections and, over time, made her nearly blind. When she was eight, her mother died from tuberculosis, and her father abandoned the children two years later for fear he could not raise them on his own. She and her younger brother, James (Jimmie), were sent to the run-down and overcrowded almshouse in Tewksbury, Massachusetts, today part of Tewksbury Hospital, and their younger sister, Mary, was left to an aunt. Jimmie had a weak hip condition and then died from tuberculosis four months into their stay. Anne remained at Tewksbury after his death and endured two unsuccessful eye operations.

Due to reports of cruelty to inmates at Tewksbury, including sexually perverted practices and cannibalism, the Massachusetts Board of State Charities launched an investigation into the institution in 1875.. The investigation was led by Franklin Benjamin Sanborn, then chairman of the board, and Samuel Gridley Howe, founder of the Perkins School for the Blind in Boston.

In February 1877, Anne was sent to the Soeurs de la Charite hospital in Lowell, Massachusetts, where she had another unsuccessful operation. Remaining there, she helped the nuns in the wards and went on errands in the community until July of that year when she was sent to the city infirmary, where she had one more unsuccessful operation, and was then transferred back to Tewksbury under duress. Instead of returning to the facility for predominantly ill and insane patients, she was housed with single mothers and unmarried pregnant women.

During a subsequent inspection of Tewksbury in 1880 by Franklin Benjamin Sanborn, now State Inspector of Charities, Anne beseeched him to allow her to be admitted to the Perkins School for the Blind. Within months, her plea was granted.

Howe Building, Perkins School for the Blind, in 1912

Anne began her studies at the Perkins School on October 7, 1880. Although her rough manners made her first years at Perkins humiliating for her, she managed to connect with a few teachers and made progress with her learning. While there, she befriended and learned the manual alphabet from Laura Bridgman, a graduate of Perkins and the first blind and deaf person to be educated there. Also while there, she had a series of eye operations that significantly improved her vision. In June 1886, she graduated at age 20 as the valedictorian of her class. She stated “Fellow-graduates: Duty bids us go forth into active life. Let us go cheerfully, hopefully, and earnestly, and set ourselves to find our especial part. When we have found it, willingly and faithfully perform it; for every obstacle we overcome, every success we achieve tends to bring man closer to God and make life more as He would have it.”

Helen Keller (left) in 1899 with lifelong companion and teacher Anne Sullivan (right). Photo taken by Alexander Graham Bell at his School of Vocal Physiology and Mechanics of Speech.

The summer following Sullivan’s graduation, the director of Perkins, Michael Anagnos, was contacted by Arthur Keller, who was in search of a teacher for his seven-year-old blind and deaf daughter, Helen. Anagnos immediately recommended Sullivan for this position, and she began her work on March 3, 1887, at the Kellers’ home in Tuscumbia, Alabama. As soon as she arrived there, she argued with Helen’s parents about the Civil War and over the fact that they used to own slaves. However, she also quickly connected with Helen. It was the beginning of a 49-year relationship: Sullivan evolved from teacher, to governess, and finally to companion and friend.

Sullivan’s curriculum involved a strict schedule with constant introduction of new vocabulary words; however, Sullivan quickly changed her teachings after seeing they did not suit Keller. Instead, she began to teach her vocabulary based on her own interests, by spelling each word out into Keller’s palm; within six months this method proved to be working, as Keller had learned 575 words, some multiplication tables, and the Braille system. Sullivan strongly encouraged Helen’s parents to send her to the Perkins School, where she could have an appropriate education. Once they agreed to this, Sullivan took Keller to Boston in 1888 and stayed with her there. Sullivan continued to teach her bright protégée, who soon became famous for her remarkable progress.[8] With the help of the school’s director Anagnos, Keller became a public symbol for the school, helping to increase its funding and donations and making it the most famous and sought-after school for the blind in the country. However, an accusation of plagiarism against Keller greatly upset Sullivan: she left and never returned, but did remain influential to the school. Sullivan also remained a close companion to Keller and continued to assist in her education, which ultimately included a degree from Radcliffe College.