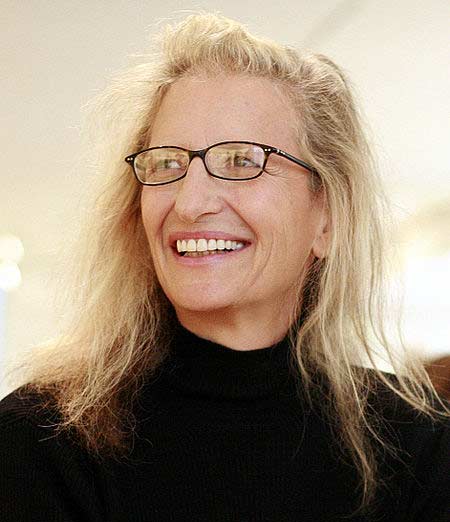 Anna-Lou “Annie” Leibovitz (born October 2, 1949) is an American portrait photographer. She is best known for her engaging portraits, particularly of celebrities, which often feature subjects in intimate settings and poses. Leibovitz’s polaroid of John Lennon and Yoko Ono, taken five hours before Lennon’s murder, is considered Rolling Stone magazine’s most famous cover photograph. The Library of Congress declared her a Living Legend, and she is the first woman to have a feature exhibition at Washington’s National Portrait Gallery.

Born in Waterbury, Connecticut, on October 2, 1949, Anna-Lou Leibovitz is the third of six children of Marilyn Edith (née Heit) and Samuel Leibovitz. She is a third-generation American. Her father was a lieutenant colonel in the U.S. Air Force of Romanian Jewish heritage and her mother was a modern dance instructor of Estonian-Jewish heritage. The family moved frequently with her father’s duty assignments, and she took her first pictures when he was stationed in the Philippines during the Vietnam War. Leibovitz’s passion for art was born out of her mother’s engagement with dance, music, and painting.

While attending Northwood High School in Silver Spring, Maryland, she became interested in various artistic endeavors and began to write and play music.

Leibovitz attended the San Francisco Art Institute, where she studied painting with the intention of becoming an art teacher. At school, she had her first photography workshop and changed her major to photography. She was inspired by the work of Robert Frank and Henri Cartier-Bresson. For several years, she continued to develop her photography skills while holding various jobs, including a stint on a kibbutz in Amir, Israel, for several months in 1969.

Leibovitz has three daughters. Her first, Sarah Cameron Leibovitz was born in October 2001 when Leibovitz was 52 years old. Twin girls Susan and Samuelle were born to a surrogate mother in May 2005.

Leibovitz had a close relationship with writer and essayist Susan Sontag from 1989 until Sontag’s death in 2004. During Sontag’s lifetime, neither woman publicly disclosed whether the relationship was a platonic friendship or romantic. In 2006, Newsweek magazine made reference to Leibovitz’s decade-plus relationship with Sontag, stating, “The two first met in the late ’80s, when Leibovitz photographed her for a book jacket. They never lived together, though they each had an apartment within view of the other’s.” When Leibovitz was interviewed for her autobiography A Photographer’s Life: 1990–2005, she said that the book told a number of stories, and “with Susan, it was a love story.” While The New York Times in 2009 referred to Sontag as Leibovitz’s “companion”, Leibovitz wrote in A Photographer’s Life: “words like ‘companion’ and ‘partner’ were not in our vocabulary. We were two people who helped each other through our lives. The closest word is still ‘friend’.” That same year, Leibovitz said the descriptor “lover” was accurate. She later reiterated: “Call us ‘lovers’. I like ‘lovers.’ You know, ‘lovers’ sounds romantic. I mean, I want to be perfectly clear. I love Susan.”

When asked if being Jewish is important to her, Leibovitz replied, “I’m not a practicing Jew, but I feel very Jewish.”

In February 2009, Leibovitz borrowed US$15.5 million, after having experienced financial challenges, putting up several houses as well as the rights to all of her photographs as collateral. The New York Times noted that “one of the world’s most successful photographers essentially pawned every snap of the shutter she had made or will make until the loans are paid off”, and that, despite a US$50 million archive, Leibovitz had a “long history of less than careful financial dealings” and “a recent series of personal issues” including the loss of her parents and the 2004 death of Sontag, as well as the addition of two children to her family, and controversial renovation of three Greenwich Village properties.

In July 2009, the Art Capital Group filed a breach of contract lawsuit against Leibovitz for US$24 million regarding repayment of these loans. In a follow-up article from September 5, 2009, an Associated Press story quoted legal experts as saying that filing for bankruptcy reorganization might offer Leibovitz her best chance to control and direct the disposition of her assets to satisfy debts.[60] On September 11, Art Capital Group withdrew its lawsuit against Leibovitz and extended the due date for repayment of the US$24 million loan. Under the agreement, Leibovitz retains control over her work and will be the “exclusive agent in the sale of her real property (land) and copyrights”.

In March 2010, Colony Capital concluded a new financing and marketing agreement with Leibovitz, paying off Art Capital and removing or reducing the risks to Leibovitz of losing her artistic works and real estate. The following month, Brunswick Capital Partners sued Leibovitz, claiming it was owed several hundred thousand dollars for helping her restructure her debt. In December 2012, Leibovitz listed her West Village townhouse for sale at $33 million, stating she wanted to move closer to her daughter.