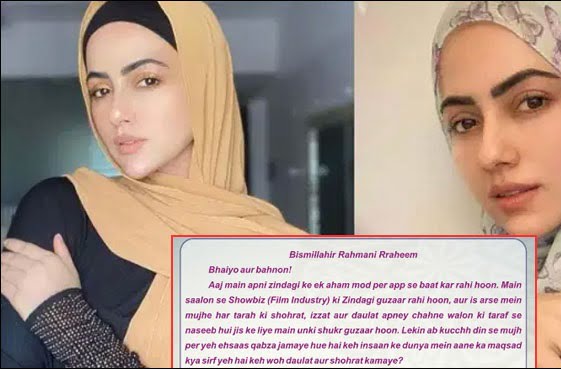 Mumbai: Leading actress Sana Khan, who showed the essence of acting with Salman Khan, has also announced to quit the showbiz industry for the sake of Islam.

Sana Khan, who has reached the heights of fame since Bigg Boss Season 6, announced on social networking sites that he is saying goodbye to the film world for the sake of religion. Will spend in service.

Sana Khan started her social media message with ‘Bismillah-ur-Rehman-ur-Rehman’ and released it in Urdu and English so that her fans all over the world could also be aware.

“Despite gaining wealth, fame, and prestige, I was in a dilemma and I had many questions in my mind which I had been searching for for the last several days,” he said.

The former Indian actress said that if she looked for her answers in the light of Islam, she would find that the purpose of our worldly life is to improve the Hereafter and this is possible only when we live according to the commands of Allah Almighty.

Sana Khan said, “She will leave the showbiz industry and dedicate her entire life to the service of humanity and she is determined to follow the command of Allah Almighty.”

He appealed to all his loved ones to pray, “Let them all pray for him to abide by his decision forever.”

Earlier, actress Zaira Wasim, who played Aamir’s daughter, had announced her resignation from Bollywood, saying that her faith was in danger due to her work in the field and that she was quietly moving away from her religion So she is leaving Bollywood.