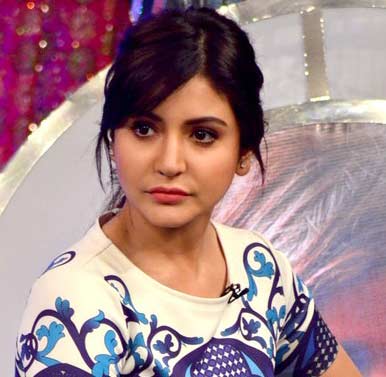 Anushka Sharma born 1 May 1988 is an Indian actress and producer who works in Hindi films. One of the most popular and highest-paid actresses in India, she has received several awards, including a Filmfare Award. She has appeared in Forbes India’s Celebrity 100 since 2012 and was featured by Forbes Asia in their 30 Under 30 list of 2018.

Born in Ayodhya and raised in Bangalore, Sharma had her first modelling assignment for the fashion designer Wendell Rodricks in 2007 and later moved to Mumbai to pursue a full-time career as a model. She made her acting debut opposite Shah Rukh Khan in the highly successful romantic film Rab Ne Bana Di Jodi (2008) and rose to prominence with starring roles in Yash Raj Films’ romances Band Baaja Baaraat (2010) and Jab Tak Hai Jaan (2012). For playing an aspiring filmmaker in the lattermost, she won the Filmfare Award for Best Supporting Actress. Sharma went on to earn praise for playing strong-willed women in the crime thriller NH10 (2015), and the dramas Dil Dhadakne Do (2015), Ae Dil Hai Mushkil (2016), and Sui Dhaaga (2018). Her highest-grossing releases came with the sports drama Sultan (2016), and Rajkumar Hirani’s religious satire PK (2014) and biopic Sanju (2018).

Sharma is the co-founder of the production company Clean Slate Films, under which she has produced several films, including NH10. She is the ambassador for multiple brands and products, has designed her own line of clothing for women, named Nush, and supports various charities and causes, including gender equality and animal rights. Sharma is married to the cricketer Virat Kohli.

Anushka Sharma was born on 1 May 1988 in Ayodhya, Uttar Pradesh. Her father, Colonel Ajay Kumar Sharma, is an army officer, and her mother, Ashima Sharma, is a homemaker. Her father is a native of Uttar Pradesh, while her mother is a Garhwali. Her elder brother is film producer Karnesh Sharma, who earlier served in the Merchant Navy. Sharma has stated that being a military brat played an important role in shaping her as a person and contributing to her life. In an interview with The Times of India in 2012, she said, “I take pride in saying that I am an army officer’s daughter even more than being an actor.”

Sharma was raised in Bangalore. She was educated at the Army School there and received a degree in arts from Mount Carmel College. She originally intended to pursue a career in modeling or journalism and had no aspirations to be an actress. After graduation, Sharma moved to Mumbai to further her modeling career. She enrolled herself at the Elite Model Management and was groomed by the style consultant Prasad Bidapa. In 2007, Sharma made her runway debut at the Lakme Fashion Week for designer Wendell Rodricks’s Les Vamps Show and was picked to be his finale model at the Spring Summer 2007 Collection. Since then she has done campaigns for the brand’s Silk & Shine, Whisper, Nathella Jewelry, and Fiat Palio. Sharma later said, “I think I was born to emote and act. I would walk down the ramp and smile and they used to say, ‘give us a blank look.’ It was really difficult, not to smile”.[9] Whilst modeling, Sharma also joined an acting school and began auditioning for film roles.