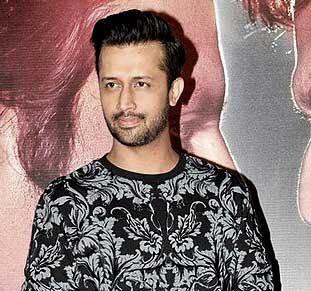 Muhammad Atif Aslam (Urdu: محمد عاطف اسلم‎; born 12 March 1983) is a Pakistani playback singer and actor. He has recorded numerous chart-topping songs in both Pakistan and India and is known for his vocal belting technique. He predominantly sings in Urdu, Hindi and has also sung in Bengali. Because of his chart-topping and successful songs, he is often regarded as one of the best playback singers of Indian and Pakistani music industry till date. He has received Tamgha-e-Imtiaz in 2008, the fourth-highest decoration given to civilians in Pakistan and has also received numerous Lux style awards. His acting debut was in the 2011 social drama Bol. In 2019, he was awarded The Dubai Walk of fame-Star for being the “Best Singer in Pakistan”. Atif Aslam calls his fans as “Aadeez” (Urdu: عادیز‎ transl. Habituals).

Atif Aslam was born in a Punjabi Muslim family in Wazirabad (Gujranwala District), Punjab, Pakistan. He began his education at Kimberley Hall School, Lahore. In 1991, he moved to Rawalpindi where he continued his studies in St. Paul’s Cambridge School, Satellite Town, Rawalpindi. In 1995, Aslam returned to Lahore where he continued his studies in Divisional Public School. He attended Fazaia Inter College Lahore for his HSSC in 1999–2001. He attended PICS to do his Bachelor’s degree in Computer Science. Atif also revealed that he wanted to become a cricketer.

Atif Aslam says that he has had no formal training in music, that it was not until his college days that he began to actively take part in music competitions and his friends inspired him to pursue a career in music. He has said that Nusrat Fateh Ali Khan is one of his very first inspirations in singing.

The career of Atif Aslam begun with forming the band Jal and releasing the song ‘Aadat’ with Goher Mumtaz in Pakistan in 2003. The original version of the song was written by Goher Mumtaz and sung by Atif Aslam . During that time, Atif Aslam was the lead singer of Jal. He recorded Aadat with his pocket money at the age of 17. The band released the song on the internet in 2003, which became a youth anthem.

After separation from Jal, On 17 July 2004, Aslam released his first album titled Jal Pari produced by “Sarmad Abdul Ghafoor, which was an instant hit. The album also won the 4th Lux Style Awards in 2005 in the category of “Best Album”

He got his first breakthrough in Bollywood when director Mahesh Bhatt called Aslam to seek his consent to include “Woh Lamhey” in the soundtrack of his new motion picture, Zeher (2005). Aadat and its remix was created for the film Kalyug directed by Mohit Suri.

In 2006, Atif worked with Mithoon for the song Tere Bin from Bas Ek Pal. The song was a hit in both India and Pakistan and nominated him for Filmfare Award. In 2008, he recorded three versions of Pehli Nazar Mein and Bakhuda Tumhi Ho from Race and Kismat Konnection respectively composed by Pritam. Pehli Nazar Mein had won him IIFA Award. In film Ajab Prem Ki Ghazab Kahani and he sang 2 chartbuster songs Tu Jaane Na and Tera Hone Laga Hoon, composed by pritam, which fetched him several nominations.

In 2010, he recorded 10 songs for Prince film including remixes, composed by Sachin Gupta with lyrics by Sameer. Ab Khud Kuch Karna Paray Ga was recorded with Strings band. A Punjabi song Rona Chaditta also known as Mahi Mahi for the film Mel Karade Rabba was released,which went onto become a hit.

In 2011, he sang a song from F.A.L.T.U composed by Sachin-Jigar named Le Ja Tu Mujhe. The same year, he sang two songs Hona Tha Pyar and Kaho Aaj Bol Do for the film Bol in which he was casted a lead role. In next year, He recorded 3 songs for the film Tere Naal Love Ho Gaya, Piya O Re Piya and Tu Muhabbat Hai. In 2013, he recorded a total of 12 songs including 4 blockbuster songs. 3 song for Jayanta Bhai Ki Luv Story, Ramaiya Vasta Vaiya and Phata Poster Nikla Hero and 2 songs for the film Race 2. Allah Duhai Hai, Jeene Laga Hoon, Zindagi Aa Raha Hoon Main and Main Rang Sharbaton Ka were blockbusters and fetched several awards and multiple nominations for him. Zameen Jaagti Hai and Tu Khaas Hai were released in Pakistan.

In 2014 and 2015, he worked with Sachin-Jigar and recorded 2 songs,one for the film Entertainment, and the other Jeena Jeena for the film Badlapur, The song Jeena Jeena topped various charts and was one of the biggest hits of 2015, which also got him a nomination for the Filmfare award for best playback singer.

Aslam’s rendition of “Tajdar-e-Haram” crossed 285 million views on YouTube in July 2020, originally released in 2015, it became the first video origin in Pakistan to achieve the landmark record. The qawwali-song, originally sung by Sabri Brothers, was released on 15 August 2015 in CokeStudio Season 8 and has been viewed in 186 countries across the world. Also, it is Aslam’s first individual video on YouTube to make the record.

Atif’s worked with musician Arko Pravo for the chartbuster song Tere Sang Yaara from Rustom which topped “Bollywood Life” chart, got nominated for “Filmfare Award for Best Male Playback Singer”. Atif worked with Mithoon for 4 versions of the song “Mar Jaayen” from Loveshhuda in 2016, penned by Sayeed Qaudri. He worked with musical duo Sachin-Jigar for Toota Jo Kabhi Taara and Khair Mangda for the movie A Flying Jatt.

“Dil Dancer” from the movie Actor In Law released, which earned him LUX Award for best playback singer. He sang”Yaariyaan” song with Ali Zafar, composed by Sahir Ali Bagga which released on 2016 Defence Day. He collaborated with Maher Zain for the song “I’m Alive” and sang “Jal Pari” for the advertisement of Huawei Honor 5X.

In the start, “Hoor” song from Hindi Medium (film) released. After which, Romantic song “Baarish” from Half Girlfriend composed by Tanishk Bagchi and Ballad song “Musafir” from Sweetie Weds NRI were released. Romantic song “Darasal” composed by JAM8 released same year. 2 Ballad songs “Main Agar” from Tubelight and “Jaane De” from Qarib Qarib Singlle were out, composed by Pritam and Vishal Mishra respectively. In December 2017, “Dil Diyan Gallan” from Tiger Zinda Hai released, composed by Vishal-Shekhar and lyrics by Irshad Kamil. The song has garnered over 600M views on YouTube as of June 2020. His first Bengali song “Mithe Alo” from Cockpit film was also released.

The same year, Pehli Dafa starring Atif Aslam and Ileana D’Cruz was released, which was a composition of Shiraz Uppal. A single “Younhi” written by Atif himself released on Atif’s birthday, which featured Atif Aslam and Nicolli Dela Nina. “Noor-e-Azal” Hamd released, sung by Atif and Abida Parveen, a composition of Shani Arshad. He also sang ISPR song “Kabhi Percham Main”, which released on 2017 Defence Day.

In 2018, a total of 19 songs released by Atif Aslam. Romantic song “Dil Meri Na Sune” was composed by Himesh Reshammiya for film Genius. “O Saathi” from Baaghi 2 written by Arko, “Paniyon Sa” from Satyameva Jayate, “Tere Liye” from Namastey England and “Tera Hua” from Loveyatri were major hits in the charts He voiced for 3 recreated songs “Jab Koi Baat”, “Dekhte Dekhte” for Batti Gul Meter Chalu and “Chalte Chalte” for Mitron. Other songs include “Sehmi Hai Dhadkan”, 3 versions of “Selfish” for Race 3 and 2 songs “Tum” and “O Meri Laila” from Laila Majnu lyrics by Irshad Kamil.

In January 2019, “Auliya” song from Hum Chaar released, composed by Vipin Patwa. “Baarishein” released on 13 February 2019, a day before 2019 Pulwama Attack. He performed at 18th Lux Style Awards and sang “Mujhe Dil Se Na Bhulana” with Momina Mustehan as a tribute to Shabnam.

“In Dinon” and “Anjaana” from Superstar film were also released. Pardadari, sung by Atif and Abida Parveen also released. He also sang “Shaheen e Pakistan” with ISPR, which released on Pakistan Day special.

In February 2019 the All Indian Cine Workers Association levied a ban on Pakistani artists after 2019 Pulwama Attack. Many songs were already sung and recorded by Atif Aslam which were soon going to be released in Bollywood. But were replaced by other Indian singers. Tu Mila To Haina and Pachtaoge were replaced by Arijit Singh. Main Taare replaced by Salman Khan and Sajda Karu were replaced by Stebin Ben. But later, Atif’s versions were released on public demand.

Kinna Sona also was covered by Pakistani singer Atif Aslam for the film Marjaavaan., but the track was replaced at the last minute by a version sung by the Indian singer Jubin Nautiyal. Although the song remained a cover of the Pakistani Qawwali. In June 2020, T-Series released the initial cover sung by Atif Aslam on YouTube, however were forced to remove it and issue an ‘apology’ after a threat-laced campaign led by the far-right Indian nationalist party: Maharashtra Navnirman Sena.

In April 2020, he recited Azaan shortly after which Coke Studio released Asma-ul-Husna in May 2020, recited by Atif Aslam and produced by Zulfiqar Jabbar Khan as an expression of solidarity with humanity amid COVID-19 pandemic. It features voices from the universe recorded by NASA, thirty three backing vocalist from across the globe and the sound of Daf with pronunciation supervised by Hafiz Idrees giving it the feat of having 4M views in just four days on YouTube and as of July 2020, it received over 13M views.

Atif has 2 upcoming songs from Bollywood films which are yet to be released. A song featuring Kiara Advani, a Coca-cola ad, a song with Imran Zak titled “Woh Pal”. In a recent interview at Capital Talk, Atif revealed a Pakistani song titled “Raat” and an untitled Bengali song would be released.

He married educationist “Sara Bharwana Aslam” in Lahore on 29 March 2013. Their first child was born in 2014, named ‘Ahad Atif Aslam”. They became parents again in December 2019, with their second son.