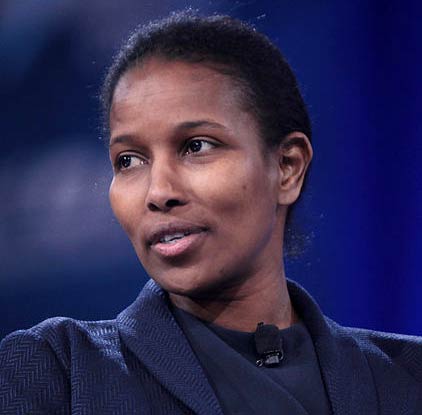 Ayaan Hirsi Ali (born Ayaan Hirsi Magan, 13 November 1969) is a Somali-born Dutch-American activist, feminist, author, scholar and former politician. She received international attention as a critic of Islam and advocate for the rights and self-determination of Muslim women, actively opposing forced marriage, honor violence, child marriage and female genital mutilation. She has founded an organisation for the defense of women’s rights, the AHA Foundation.

Ayaan Hirsi Ali is a Fellow with the Hoover Institution at Stanford University, a Fellow with the Future of Diplomacy Project at the Belfer Center for Science and International Affairs at The Harvard Kennedy School, a visiting scholar at the American Enterprise Institute in Washington, D.C., and a member of the Council on Foreign Relations.

In 2003, Hirsi Ali was elected a member of the House of Representatives, the lower house of the States General of the Netherlands, representing the centre-right People’s Party for Freedom and Democracy (VVD). A political crisis related to the validity of her Dutch citizenship—namely the accusation that she had lied on her application for political asylum—led to her resignation from parliament, and indirectly to the fall of the second Balkenende cabinet in 2006.

Hirsi Ali is a former Muslim who rejected the faith and became an atheist, and has been a vocal critic of Islam. In 2004, she collaborated on a short film with Theo van Gogh, entitled Submission, which depicted oppression of women under fundamentalist Islamic law, and was critical of the Islamic canon itself. The film led to controversy and death threats. Van Gogh was then murdered several days after the film’s release by Mohammed Bouyeri, a Moroccan-Dutch Islamic terrorist. Hirsi Ali maintains that “Islam is part religion, and part a political-military doctrine, the part that is a political doctrine contains a world view, a system of laws and a moral code that is totally incompatible with our constitution, our laws, and our way of life.” Having previously argued that Islam was beyond reform, she called in her book Heretic (2015) for a reformation of Islam by defeating the Islamists and supporting reformist Muslims.

In 2005, Hirsi Ali was named by Time magazine as one of the 100 most influential people in the world. She has also received several awards, including a free speech award from the Danish newspaper Jyllands-Posten, the Swedish Liberal Party’s Democracy Prize, and the Moral Courage Award for commitment to conflict resolution, ethics, and world citizenship. Critics accuse Ali of having built her political career on Islamophobia, and questioned her scholarly credentials “to speak authoritatively about Islam and the Arab world”. Her works have been accused of using neo-Orientalist portrayals and of being an enactment of the colonial “civilizing mission” discourse.

Hirsi Ali migrated to the United States and became a U.S. citizen in 2013. She has published two autobiographies, in 2006 and 2010. She married the British historian and commentator Niall Ferguson in 2011.

Ayaan was born in 1969 in Mogadishu, Somalia. Her father, Hirsi Magan Isse, was a prominent member of the Somali Salvation Democratic Front and a leading figure in the Somali Revolution. Shortly after she was born, her father was imprisoned due to his opposition to the Siad Barre government. Hirsi Ali’s father had studied abroad and was opposed to female genital mutilation, but while he was imprisoned, Hirsi Ali’s grandmother had a man perform the procedure on her, when Hirsi Ali was five years old. According to Hirsi Ali, she was fortunate that her grandmother could not find a woman to do the procedure, as the mutilation was “much milder” when performed by men.

After her father escaped from prison, he and the family left Somalia in 1977, going to Saudi Arabia and then to Ethiopia, before settling in Nairobi, Kenya by 1980. There he established a comfortable upper-class life for them. Hirsi Ali attended the English-language Muslim Girls’ Secondary School. By the time she reached her teens, Saudi Arabia was funding religious education in numerous countries and its religious views were becoming influential among many Muslims. A charismatic religious teacher, trained under this aegis, joined Hirsi Ali’s school. She inspired the teenaged Ayaan, as well as some fellow students, to adopt the more rigorous Saudi Arabian interpretations of Islam, as opposed to the more relaxed versions then current in Somalia and Kenya. Hirsi Ali said later that she had long been impressed by the Qur’an and had lived “by the Book, for the Book” throughout her childhood.

She sympathised with the views of the Islamist Muslim Brotherhood, and wore a hijab with her school uniform. This was unusual at the time but has become more common among some young Muslim women. At the time, she agreed with the fatwa proclaimed against British Indian writer Salman Rushdie in reaction to the portrayal of the Islamic prophet Muhammad in his novel The Satanic Verses. After completing secondary school, Hirsi Ali attended a secretarial course at Valley Secretarial College in Nairobi for one year. As she was growing up, she also read English-language adventure stories, such as the Nancy Drew series, with modern heroine archetypes who pushed the limits of society. Also, remembering her grandmother refusing soldiers entry into her house, Hirsi Ali associated with Somalia “the picture of strong women: the one who smuggles in the food, and the one who stands there with a knife against the army and says, ‘You cannot come into the house.’ And I became like that. And my parents and my grandmother don’t appreciate that now – because of what I’ve said about the Qur’an. I have become them, just in a different way.”

Early life in the Netherlands

At first she held various short-term jobs, ranging from cleaning to sorting post. She worked as a translator at a Rotterdam refugee center which, according to a friend interviewed in 2006 by The Observer newspaper, marked her deeply.

As an avid reader, in the Netherlands she found new books and ways of thought that both stretched her imagination and frightened her. Sigmund Freud’s work introduced her to an alternative moral system that was not based on religion. During this time she took courses in Dutch and a one-year introductory course in social work at the Hogeschool De Horst in Driebergen. She has said that she was impressed with how well Dutch society seemed to function. To better understand its development, she studied at the Leiden University (Leiden, Netherlands), where she obtained an MSc degree in political science in 2000.

Between 1995 and 2001, Hirsi Ali also worked as an independent Somali-Dutch interpreter and translator, frequently working with Somali women in asylum centers, hostels for abused women, and at the Dutch immigration and naturalization service (IND, Immigratie- en Naturalisatiedienst). While working for the IND, she became critical of the way it handled asylum seekers. As a result of her education and experiences, Hirsi Ali speaks six languages: English, Somali, Arabic, Swahili, Amharic, and Dutch.

Hirsi Ali has continued discussion of these issues in her two autobiographies, published in Dutch in 2006 and in English in 2010. In her first work, she said that in 1992 her father arranged to marry her to a distant cousin. She says that she objected to this both on general grounds (she has said she dreaded being forced to submit to a stranger, sexually and socially), and specifically to this man, whom she described as a “bigot” and an “idiot” in her book.

She told her family that she planned to join her husband, who was living in Canada, after obtaining a visa while in Germany. But in her autobiography, she said she spent her time in Germany trying to devise an escape from her unwanted marriage. She decided to visit a relative in the Netherlands, and to seek help after arrival and claim asylum.

Her first autobiography, Infidel (2006), was published in English in 2007. In a review, American Enterprise Institute fellow Joshua Muravchik described the book as “simply a great work of literature,” and compared her to novelist Joseph Conrad.

Ali is also a contributor at The Daily Beast.ed as The Son Factory: About Women, Islam and Integration. A collection of essays and lectures from before 2002. It also contains an extended interview originally published in Opzij, a feminist magazine. The book focuses on the position of Muslims in the Netherlands.

In the year following the assassination of her collaborator, Theo van Gogh, Hirsi Ali received five awards related to her activism.