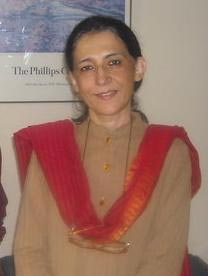 Ayesha Jalal (Punjabi, Urdu: عائشہ جلال‎) is a Pakistani-American historian who serves as the Mary Richardson Professor of History at Tufts University, and was the recipient of the 1998 MacArthur Foundation Fellowship. Ayesha is married to Indian historian and politician Sugata Bose.

Born in Lahore in 1956, Ayesha Jalal studied at Wellesley College before moving to Trinity College, Cambridge where she received her doctorate in 1983. She stayed at Cambridge until 1987, working as a fellow of Trinity College and later as a Leverhulme Fellow. She moved to Washington, D.C. in 1985, to work as a fellow at the Woodrow Wilson Center and later as Academy Scholar at the Harvard University’s Academy for International and Area Studies. In 1999, she joined Tufts University as a tenured professor.

The bulk of her work deals with the creation of Muslim identities in modern South Asia.

Ayesha Jalal was born in Lahore, Pakistan in 1956 to Hamid Jalal, a senior Pakistani civil servant and Zakia Jalal, who was Saadat Hasan Manto’s wife Safia’s sister. Therefore, she is related to the renowned Urdu fiction writer Saadat Hasan Manto. She came to New York City at the age of 14 when her father was posted at the Pakistan Mission to the United Nations.

She obtained her BA, majoring in History and Political Science, from Wellesley College, USA, and her doctorate in history from Trinity College at University of Cambridge, where she wrote her Ph.D. dissertation: ‘Jinnah, the Muslim League and the Demand for Pakistan’.

Ayesha Jalal is among the most prominent American academics who writes on the history of South Asia. In her book, The Sole Spokesman (Cambridge University Press, 1985 and 1994), Jalal gives her perspective of what happened in the years between the 1937 elections in British India and the Partition of the Indian subcontinent, identifying the factors which led to the creation of Pakistan and provides new insights into the nature of the British transfer of power in India. In particular, she focuses on the role of Mohammad Ali Jinnah, the leader of All-India Muslim League, and the main proponent of the Two Nation Theory on which the demand for Pakistan was based. Jinnah claimed to be the sole spokesman of all the Indian Muslims, not only in provinces where they were in a majority but also in the provinces where they were in a minority. Yet given the political geography of the subcontinent, it was clear that there would always be as many Muslims outside a specifically Muslim state as inside it. This book investigates how Jinnah proposed to resolve the contradiction between assertions of a “separate Muslim nation” and the need for a strategy which could safeguard the interests of all Indian Muslims. It does so by identifying Jinnah’s real political aims, the reasons why he was reluctant to bring them into the open, and his success or failure in achieving them.