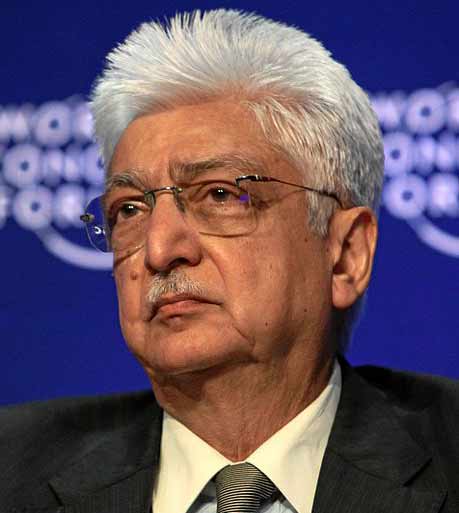 Azim Hashim Premji (born 24 July 1945) is an Indian business tycoon, investor, engineer, and philanthropist, who was the chairman of Wipro Limited. Premji remains a non-executive member of the board and founder chairman. He is informally known as the Czar of the Indian IT Industry. He was responsible for guiding Wipro through four decades of diversification and growth, to finally emerge as one of the global leaders in the software industry.

In 2010, he was voted among the 20 most powerful men in the world by Asiaweek. He has twice been listed among the 100 most influential people by TIME Magazine, once in 2004 and more recently in 2011. For years, he has been regularly listed one among the 500 Most Influential Muslims of the world.

He was named the nineteenth richest person in India with an estimated net worth of US$6.5 billion according to the India’s Richest 2019 list by Forbes. In 2013, he agreed to give away at least half of his wealth by signing The Giving Pledge. Premji started with a $2.2 billion donation to the Azim Premji Foundation, focused on education in India.[15] He topped EdelGive Hurun India Philanthropy List for the year 2020.

Premji was born in Bombay, India in a Gujarati Muslim family. His father was a noted businessman and was known as Rice King of Burma. Muhammad Ali Jinnah, founder of Pakistan, invited his father Muhammed Hashem Premji to come to Pakistan, he turned down the request and chose to remain in India.[18]

Premji has a Bachelor of Science in Electrical Engineering degree from Stanford University. He is married to Yasmeen. The couple have two children, Rishad and Tariq. Rishad Premji is currently the Chief Strategy Officer of IT Business, Wipro.

In 1945, Muhammed Hashim Premji incorporated Western Indian Vegetable Products Ltd, based at Amalner, a small town in the Jalgaon district of Maharashtra. It used to manufacture cooking oil under the brand name Sunflower Vanaspati, and a laundry soap called 787, a byproduct of oil manufacture. In 1966, on the news of his father’s death, the then 21-year-old Azim Premji returned home from Stanford University, where he was studying engineering, to take charge of Wipro.

The company, which was called Western Indian Vegetable Products at the time, dealt in hydrogenated oil manufacturing but Azim Premji later diversified the company to bakery fats, ethnic ingredient based toiletries, hair care soaps, baby toiletries, lighting products, and hydraulic cylinders. In the 1980s, the young entrepreneur, recognising the importance of the emerging IT field, took advantage of the vacuum left behind by the expulsion of IBM from India, changed the company name to Wipro and entered the high-technology sector by manufacturing minicomputers in technological collaboration with an American company Sentinel Computer Corporation. Thereafter Premji made a focused shift from soaps to software.

Premji has been recognised by Business Week as one of the Greatest Entrepreneurs for being responsible for Wipro emerging as one of the world’s fastest growing companies.

In 2005, the Government of India honoured him with the title of Padma Bhushan for his outstanding work in trade and commerce.

In 2011, he has been awarded Padma Vibhushan, the second highest civilian award by the Government of India.

In 2018, Premji was conferred with Chevalier de la Légion d’Honneur (Knight of the Legion of Honour) – the highest French civilian distinction by the French Government.

In December 2019, Premji was cited by Forbes magazine as one of the ‘Heroes of Philanthropy list of 30 altruists’ in the Asia-Pacific region.