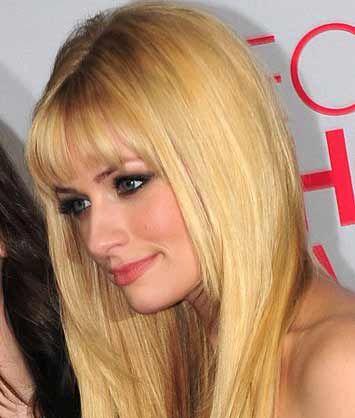 Elizabeth Ann Behrs (born December 26, 1985) is an American actress and writer best known for her starring role as Caroline Channing in the CBS comedy series 2 Broke Girls. The show ran for six seasons and earned Behrs praise and nominations for the Teen and the People’s Choice Awards. Having made her screen debut in the 2009 comedy film American Pie Presents: The Book of Love, she later ventured into television roles. After 2 Broke Girls, Behrs returned to feature films with the 2015 productions Chasing Eagle Rock and Hello, My Name Is Doris. She voiced Carrie Williams in the animated film Monsters University (2013) and Moochie in the television series Home: Adventures with Tip & Oh. In 2018, she was cast as Gemma Johnson in the CBS sitcom The Neighborhood.

In addition to her acting career, Behrs has authored a self-help book and continues to write the young-adult webcomic Dents. She is also a philanthropist and the founder of the SheHerdPower Foundation, which helps victims of sexual assaults.

Behrs was born on December 26, 1985 in Lancaster, Pennsylvania, the elder daughter of David Behrs, a college administrator, and Maureen Behrs, a first grade teacher. She has a sister who is six years younger. In 1989 her family moved to Springfield, Virginia and later to Lynchburg, Virginia, where she was raised. She began performing in theater at age four and played soccer while growing up. She was a student at E.C. Glass High School.

At age 15, Behrs relocated with her family to Marin County, California. She began attending Tamalpais High School in 2001, and was accepted into the school’s highly regarded drama program. She graduated from that high school in 2004. Behrs studied at the American Conservatory Theater in San Francisco, and went on to perform in the musical Dangling Conversations: The Music of Simon and Garfunkel, and the plays Korczak’s Children and A Bright Room Called Day. She was classically trained as a singer.

Behrs moved to Los Angeles, California, in 2004, to study acting at the UCLA School of Theater, Film and Television. In 2005, she played Sandy Dumbrowski in a production of Grease at San Francisco’s Ray of Light Theatre, and was named Miss Marin County in 2006. She began auditioning for roles in her senior year and graduated in 2008 with a bachelor’s degree in critical studies. Behrs was awarded a Young Musician’s Foundation Vocal Scholarship after graduating from the college.

Behrs landed her first film role in the teen comedy American Pie Presents: The Book of Love, which she filmed in Vancouver for seven weeks beginning in March 2009. The seventh in the American Pie series, the film was released direct-to-video on December 22, 2009. She next starred in Adventures of Serial Buddies, an independent comedy about an inept group of serial killers produced by TV personality Maria Menounos. The film also starred Christopher Lloyd, Kathie Lee Gifford, and Artie Lange. In late 2010, Behrs shot the independent feature, Route 30, Too!, in Chambersburg, Pennsylvania, playing an alien girl.

Behrs began working in television with guest appearances on NCIS: Los Angeles and ABC’s Castle. In 2011, she was working as a nanny and at the Geffen Playhouse in Westwood, when she auditioned for the CBS sitcom 2 Broke Girls. She landed the lead role after seven auditions. Behrs stars as Caroline Channing, an heiress from Manhattan’s Upper East Side, who is forced to become a waitress at a diner in Williamsburg, Brooklyn after her father is arrested for financial wrongdoing. Her character is a graduate of the Wharton School who teams up with a waitress named Max (Kat Dennings) in a business venture. The series is produced by comedian Whitney Cummings and Sex and the City-producer Michael Patrick King. In March 2016, CBS renewed the series for a sixth season. On May 12, 2017, the series was canceled after six seasons.

In 2013, Behrs appeared on It’s a Brad, Brad World, a Bravo reality television series featuring fashion stylist Brad Goreski. Behrs was also a presenter at the 2013 Academy of Country Music Awards. She voiced sorority girl Carrie Williams that year in the Disney/Pixar animated film Monsters University, a prequel to 2001’s Monsters, Inc.. She starred alongside Sally Field and Max Greenfield in the independent comedy, Hello, My Name Is Doris, directed by Michael Showalter. Behrs made her Manhattan stage debut in June 2016 at the Lucille Lortel Theatre in Halley Feiffer’s comedic play, A Funny Thing Happened on the Way to the Gynecologic Oncology Unit at Memorial Sloan-Kettering Cancer Center of New York City.

Behrs is also an author. Since 2016, she co-creates the young-adult webcomic Dents with childhood friend Matt Doyle. Inspired by X-Men comics, the webcomic explores themes such as sexuality, feminism and environmental issues. Behrs released the book The Total Me-Tox: How to Ditch Your Diet, Move Your Body & Love Your Life in May 2017, in which she shares her personal journey towards health and happiness.