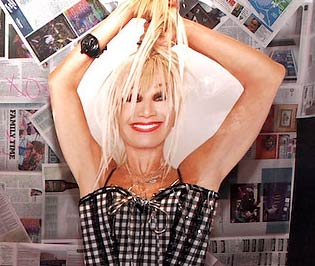 Betsey Johnson (born August 10, 1942) is an American fashion designer best known for her feminine and whimsical designs. Many of her designs are considered “over the top” and embellished. She also is known for doing a cartwheel ending in a split at the end of her fashion shows.

Johnson was born in Wethersfield, Connecticut, the second of three children born to Lena and John Johnson. She has an elder sister, Sally, and a younger brother, Robert. Johnson grew up in Terryville, Connecticut and took many dance classes, which inspired her love of costumes.

Following her graduation from high school, Johnson studied at the Pratt Institute and then later graduated Phi Beta Kappa from Syracuse University where she was a member of the Alpha Xi Delta women’s sorority. After graduation, she spent a summer as an intern at Mademoiselle magazine.

Johnson’s fashion career started after she entered and won the Mademoiselle Guest Editor Contest. Within a year, she was the in-house designer for Manhattan boutique Paraphernalia. Johnson became part of both the youthquake fashion movement and Andy Warhol’s underground scene, along with The Velvet Underground, Edie Sedgwick, Nico, and Lou Reed. In 1969, she opened a boutique called Betsey Bunky Nini on New York City’s Upper East Side. Edie Sedgwick was her house model and Johnson designed the clothing Sedgwick wore on her last film, Ciao! Manhattan.[citation needed]

In the 1970s, Johnson took control of the fashion label “Alley Cat” which was popular with the rock ‘n roll musicians of the day. In her first year, her debut collection for Alley Cat reportedly sold $5 million in volume. In September 1971 she received the Coty Fashion Critics’ Award (a ‘Winnie’).

In 1978, Johnson started her own fashion line. Her second collection did not sell well, leaving her with 3,000 pieces of spring clothing and insufficient funds to stage a 1981 fashion show to sell them and Johnson opened a retail store in the SoHo area of New York City. She designed the dress that Lisa Loeb wore in the music video for her 1994 hit “Stay (I Missed You)”.

In 2002, Johnson was inducted into the Fashion Walk of Fame. Her bronze plaque held one of her original sketches. In 2003, she expanded her line for 2004 to include handbags, accessories, hats, and scarves.

In 2008, Johnson was a contributor to Carrie Borzillo-Vrenna’s book Cherry Bomb.

The National Arts Club awarded Johnson the 2009 Medal of Honor for Lifetime Achievement in Fashion. She once described her style as a formula: “Take a leotard and add a skirt.” As of 2011, she has more than 65 stores worldwide.

On September 12, 2012, she celebrated 40 years of her brand with a retrospective fashion show with Cyndi Lauper performing.

As of May 2013, Johnson and her daughter Lulu Johnson have a reality TV show that airs on the Style Network.

On September 4, 2014, it was announced that Johnson would be one of the celebrities competing on the 19th season of Dancing with the Stars. The couple was eliminated in week 4, finishing in 10th place.

In 2018, Johnson appeared on Sugar Rush as a guest judge (Episode: “Frosted Fashion”).

Johnson’s current husband is Brian Reynolds, they married in 1997.