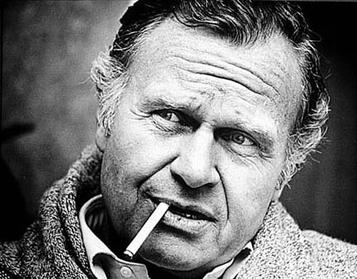 William Ralph Blass (June 22, 1922 – June 12, 2002) was an American fashion designer, born in Fort Wayne, Indiana. He was the recipient of many fashion awards, including seven Coty Awards and the Fashion Institute of Technology’s Lifetime Achievement Award (1999).

Blass was born in Fort Wayne, Indiana, the son of Ralph Aldrich Blass, a traveling hardware salesman, and his wife, Ethyl Keyser Blass.

In his autobiography, Blass wrote that the margins in his school books were filled with sketches of Hollywood-inspired fashions instead of notes. At fifteen, he began sewing and selling evening gowns for $25 each to a New York manufacturer. At seventeen, he had saved up enough money to move to Manhattan and study fashion, and, at eighteen, he was the first male to win Mademoiselle’s Design for Living award. He spent his salary of $30 a week on clothing, shoes, and elegant meals.
In 1943, Blass enlisted in the Army. Due to his intelligence and talent, he was assigned to the 603rd Camouflage Battalion whose mission was to fool the German Army into believing the Allies were positioned in fake locations, for example by using dummy tanks. He served in this unit at several major operations including the Battle of the Bulge, and the Rhine River crossing.

Blass began his New York fashion career in 1945. He was a protégé of Baron de Gunzburg. In 1970, after two decades of success in menswear and womenswear, he bought Maurice Rentner Ltd., which he had joined in 1959, and renamed it Bill Blass Limited.

Over the next 30 years he expanded his line to include swimwear, furs, luggage, perfume, and chocolate. In 1967, he was the first American couture fashion designer to start a men’s wear line. That part of his business grew to offer everything from ties, socks and belts to suits and evening clothes. It was made by 18 licensees.

Like many designers, his women’s couture collections lost money but served to promote other parts of his business. By the mid-1990s, his ready to wear business grossed about $9 million annually and his 97 licensing agreements had retail sales of more than $700 million a year.

His clients, many of whom were also his friends, included Happy Rockefeller, Brooke Astor, Nancy Kissinger, Jessye Norman, Gloria Vanderbilt and Patricia Buckley.