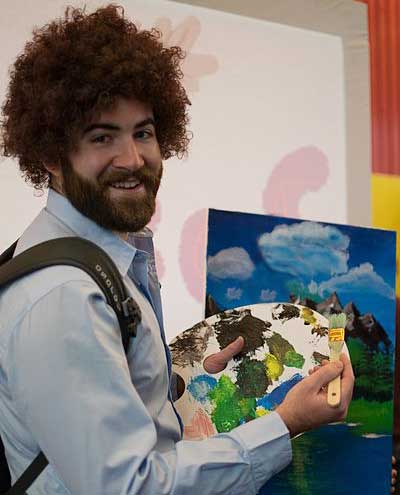 Robert Norman Ross (October 29, 1942 – July 4, 1995) was an American painter, art instructor and television host. He was the creator and host of The Joy of Painting, an instructional television program that aired from 1983 to 1994 on PBS in the United States and in Canada, Latin America and Europe. Ross went from being a public television personality in the 1980s and 1990s to posthumously being an Internet celebrity in the 21st century.

Ross was born in Daytona Beach, Florida to Jack and Ollie Ross, a carpenter and a waitress respectively, and raised in Orlando, Florida. As an adolescent, Ross cared for injured animals, including armadillos, snakes, alligators and squirrels, one of which was later featured in several episodes of his television show. He had a half-brother, Jim, who he mentioned in passing on his show. Ross dropped out of high school in the 9th grade. While working as a carpenter with his father, he lost part of his left index finger. This minor disability did not affect the way he held his palette while painting.

Military career
In 1961, 18-year-old Ross enlisted in the United States Air Force and was put into service as a medical records technician. He rose to the rank of master sergeant and served as the first sergeant of the clinic at Eielson Air Force Base in Alaska, where he first saw the snow and mountains that later became recurring themes in his artwork. He developed his quick-painting technique to create art for sale during brief daily work breaks. Having held military positions that required him to be, in his own words, “tough” and “mean”, “the guy who makes you scrub the latrine, the guy who makes you make your bed, the guy who screams at you for being late to work,” Ross decided he would never yell or raise his voice again if he ever left the military.

Ross had one son, Robert Stephen “Steve” Ross, with his first wife, Vivian Ridge. Steve, also a talented painter, occasionally appeared on The Joy of Painting and became a Ross-certified instructor. Steve appeared on camera in the last episode of Season 1, in which he read a series of general “how-to” questions sent in by viewers during the season, and Bob answered them one at a time, technique by technique, until he had completed an entire painting.

Ross and Ridge’s marriage ended in divorce in 1977. Ross and his second wife, Jane, had no children together. In 1992, Jane died of cancer. In 1995, two months before his death, Ross married for a third time, to Lynda Brown.

Ross was very secretive about his life and had a great liking for privacy, with only a tight circle of friends. Some of only a few interviews with his close-knit circle of friends and his family can be found in the 2011 PBS documentary Bob Ross: The Happy Painter.

His company, Bob Ross Inc., is protective of his intellectual property and his privacy to this day.

Ross died at the age of 52 on July 4, 1995 due to complications from lymphoma, which he had battled for several years. His remains are interred at Woodlawn Memorial Park in Gotha, Florida under a plaque marked “Bob Ross; Television Artist”. Ross kept his diagnosis a secret from the general public; his lymphoma was not known outside of his circle of family and friends until after his death.