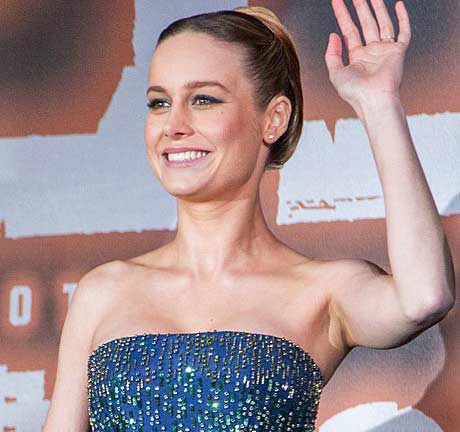 Brianne Sidonie Desaulniers (born October 1, 1989), known professionally as Brie Larson, is an American actress and filmmaker. Noted for her supporting work in comedies when a teenager, she has since expanded to leading roles in independent dramas and film franchises, receiving such accolades as an Academy Award and a Golden Globe. Time magazine named her one of the 100 most influential people in the world in 2019.

Born in Sacramento, California, Larson was homeschooled. At age six, she became the youngest student admitted to a training program at the American Conservatory Theater. She soon relocated to Los Angeles and began her acting career in 1998 with a comedy sketch in The Tonight Show with Jay Leno. She appeared as a regular in the 2001 sitcom Raising Dad and briefly dabbled with a music career, releasing the album Finally Out of P.E. in 2005. Larson subsequently played supporting roles in the comedy films Hoot (2006), Scott Pilgrim vs. the World (2010), and 21 Jump Street (2012), and appeared as a sardonic teenager in the television series United States of Tara (2009–2011).

Larson’s breakthrough came with a leading role in the acclaimed independent drama Short Term 12 (2013), and she continued to take on supporting parts in the romance The Spectacular Now (2013) and the comedy Trainwreck (2015). For playing a kidnapping victim in the drama Room (2015), Larson won the Academy Award for Best Actress. The 2017 adventure film Kong: Skull Island marked her first big-budget release, after which she starred as Carol Danvers in the 2019 Marvel Cinematic Universe superhero films Captain Marvel and Avengers: Endgame.

Larson has also co-written and co-directed two short films, including The Arm (2012), which received a special jury prize at the Sundance Film Festival. She made her feature film directorial debut in 2017 with the independent comedy-drama Unicorn Store. A gender equality activist and an advocate for sexual assault survivors, Larson is vocal about social and political issues.

Larson was born Brianne Sidonie Desaulniers on October 1, 1989, in Sacramento, California, to Heather (Edwards) and Sylvain Desaulniers. Her parents were homeopathic chiropractors who ran a practice together, and they have another daughter, Milaine. Her father is French Canadian, with roots in Winnipeg, and in her childhood, Larson spoke French as her first language. She was mostly homeschooled, which she believed allowed her to explore innovative and abstract experiences. Describing her early life, Larson has said that she was “straight-laced and square”, and that she shared a close bond with her mother but was shy and suffered from social anxiety. During the summer, she would write and direct her own home movies in which she cast her cousins and filmed in her garage. At age six, she expressed interest in becoming an actress, later remarking that the “creative arts was just something that was always in me”. That same year, she auditioned for a training program at the American Conservatory Theater in San Francisco, where she became the youngest student admitted.

Larson experienced trauma when her parents divorced when she was seven. She had a dysfunctional relationship with her father; she has recalled, “As a kid I tried to understand him and understand the situation. But he didn’t do himself any favors. I don’t think he ever really wanted to be a parent.” Soon after their split, Heather relocated to Los Angeles with her two daughters to fulfill Larson’s acting ambition. They had limited financial means and lived in a small apartment near Hollywood studio lots at Burbank. Larson described her experience, “We had a crappy one-room apartment where the bed came out of the wall and we each had three articles of clothing.” Even so, Larson has recounted fond memories of that period and has credited her mother for doing the best she could for them.

As her last name was difficult to pronounce, she adopted the stage name Larson from her Swedish great-grandmother as well as an American Girl doll named Kirsten Larson that she received as a child. Her first job was performing a commercial parody for Barbie, named “Malibu Mudslide Barbie”, in a 1998 episode of The Tonight Show with Jay Leno. She subsequently took on guest roles in several television series, including Touched by an Angel and Popular. In 2000, she was cast in the Fox sitcom Schimmel, which was canceled before airing when its star, Robert Schimmel, was diagnosed with cancer.

Larson is reticent about discussing her personal life and declines to answer questions in interviews that make her uncomfortable. When asked about her desire to be private, she has said that she fears being judged for her flaws and has added that the privacy allows her to play a wide variety of parts without being typecast. Larson began dating Alex Greenwald, a musician and lead singer of the band Phantom Planet, in 2013, and they were engaged from 2016 to 2019. The couple lived together in Hollywood Hills, Los Angeles. She had credited Greenwald for creating a safe space for her and for empowering her to take risks in her work.

Describing Larson’s off-screen persona, Holly Millea of Elle wrote in 2016 that she “carries herself like an athlete, lean and solid, surefooted yet her energy is warm and familial, literally embracing”. Anne Helen Petersen of BuzzFeed considers her to be “incredibly warm” and adds that she is “a serious nerd, with the endlessly tunneling knowledge of a homeschooler”. Jennifer Dickison of Porter writes that Larson’s “fully formed” personality made it difficult to categorize her into a conventional slot.

Larson has said that she is interested in films that illustrate the “human condition” and which “make people feel more connected to themselves the rest of the world”. She is drawn to parts that differ from her own personality and which involve themes of social activism. The journalist Fan Zhong of W has identified a theme of “sex appeal, inner torment, and a quick, playful wit” in her characters. Her Room director Lenny Abrahamson believes that her craft has “none of that showy intensity that sometimes gets all the attention” and has said that her “awareness of tougher lives” empowers her performances. Destin Daniel Cretton, who directed her in Short Term 12 and The Glass Castle, has praised her ability to improvise, saying, “I never know what’s going to happen, and often she doesn’t know what’s going to happen.”

Larson maintains an active social media presence and uses it as a platform to share opinions and posts that she writes herself. In 2020, she launched her own YouTube channel. She was featured by Forbes in their 30 Under 30 list of 2016 and was included by People magazine in their annual beauty list in 2016 and 2019. In 2018, she was named among the best American actors under 30 by IndieWire. Madame Tussauds New York museum installed a wax sculpture of Larson as Captain Marvel in 2019. In the same year, Time magazine named her one of the 100 most influential people in the world.