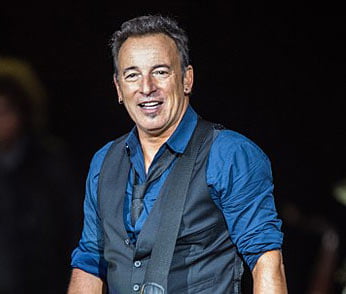 Bruce Frederick Joseph Springsteen (born September 23, 1949) is an American singer, songwriter, and musician who is both a solo artist and the leader of the E Street Band. A native of the Jersey Shore, he received critical acclaim for his early 1970s albums and attained worldwide fame upon the release of Born to Run in 1975. During a career that has spanned five decades, Springsteen has become known for his poetic and socially conscious lyrics and lengthy, energetic stage performances, earning the nickname “The Boss”. He has recorded both rock albums and folk-oriented works, and his lyrics often address the experiences and struggles of working-class Americans.

Springsteen has sold more than 135 million records worldwide and more than 64 million records in the United States, making him one of the world’s best-selling music artists. He has earned numerous awards for his work, including 20 Grammy Awards, two Golden Globes, an Academy Award, and a Tony Award (for Springsteen on Broadway). Springsteen was inducted into both the Songwriters Hall of Fame and the Rock and Roll Hall of Fame in 1999, received the Kennedy Center Honors in 2009, was named MusiCares person of the year in 2013, and was awarded the Presidential Medal of Freedom by President Barack Obama in 2016.

Bruce Frederick Joseph Springsteen was born at Monmouth Medical Center, in Long Branch, New Jersey, on September 23, 1949. He is of Dutch, Irish, and Italian descent. He spent his childhood in Freehold, New Jersey, where he lived on South Street. His father, Douglas Frederick “Dutch” Springsteen (1924–1998), worked as a bus driver and held other jobs. Douglas Springsteen suffered from mental health issues throughout his life which worsened in his later years. Springsteen’s mother, Adele Ann (née Zerilli) (1925-), was originally from the Bay Ridge neighborhood in Brooklyn, worked as a legal secretary, and was the main breadwinner in Springsteen’s family. Springsteen has two younger sisters named Virginia and Pamela. The latter had a brief acting career, but left to pursue photography full-time; she later took photos for his albums Human Touch, Lucky Town, and The Ghost of Tom Joad.

Springsteen’s Italian maternal grandfather was born in Vico Equense. He emigrated through Ellis Island, and could not read or write when he arrived. He eventually became a lawyer, and impressed the young Springsteen as being larger than life. Springsteen’s last name is topographic and of Dutch origin, literally translating to “jumping stone” but more generally meaning a kind of stone used as a stepping stone in unpaved streets or between two houses. The Springsteens were among the early Dutch families who settled in the colony of New Netherland in the 1600s.

Raised a Catholic, Springsteen attended the St. Rose of Lima Catholic school in Freehold, where he was at odds with the nuns and rejected the strictures imposed upon him, even though some of his later music reflects a Catholic ethos and includes a few rock-influenced, traditional Irish-Catholic hymns. In a 2012 interview, he explained that it was his Catholic upbringing rather than political ideology that most influenced his music. He noted in the interview that his faith had given him a “very active spiritual life” but joked that this “made it very difficult sexually”. He added, “Once a Catholic, always a Catholic.” He grew up hearing fellow New Jersey singer Frank Sinatra on the radio and became interested in being a musician himself when, in 1956 and 1957, at the age of seven, he saw Elvis Presley on The Ed Sullivan Show. Soon after, his mother rented him a guitar from Mike Diehl’s Music in Freehold for $6 a week, but it failed to provide him with the instant gratification he desired.

In ninth grade, Springsteen began attending the public Freehold High School, but did not fit in there either. Former teachers have said he was a “loner who wanted nothing more than to play his guitar”. He graduated in 1967, but felt like such an outsider that he skipped the ceremony. He briefly attended Ocean County College, but dropped out. Called for conscription in the U.S. Army when he was 19, Springsteen failed the physical examination and did not serve in the Vietnam War. He had suffered a concussion in a motorcycle accident when he was 17, and this, together with his “crazy” behavior at induction, made him unacceptable for service.

While rejecting religion in his earlier years, Springsteen stated in his autobiography Born to Run, “I have a personal relationship with Jesus. I believe in his power to save, love but not to damn.” In terms of his lapsed Catholicism, he has stated that he “came to ruefully and bemusedly understand that once you’re a Catholic you’re always a Catholic”. He elaborated, “I don’t participate in my religion but I know somewhere… deep inside… I’m still on the team.”

Springsteen has spoken openly about his struggles with depression, which he accepted and began to face in his 30s. Around this time, frustrated with being an underweight “fast-food junkie” who would have to be helped off the stage after a show due to poor conditioning, he began running up to six miles on a treadmill and lifting weights three times a week; in September 2019, an article celebrating his 70th birthday revealed that he has maintained this same workout routine since he began following it. He has also reportedly followed a mostly vegetarian diet since around the same time and has been noted for his lifelong avoidance of hard drugs.

In a June 2017 interview with Tom Hanks, Springsteen admitted to having been a tax evader early in his career.

Springsteen dated actress Joyce Hyser for four years in the early 1980s. Previously, he had dated photographer Lynn Goldsmith and model Karen Darvin. In the early 1980s, he met Patti Scialfa at The Stone Pony bar in New Jersey, the evening she was performing alongside his friend Bobby Bandiera, with whom she had written “At Least We Got Shoes” for Southside Johnny. Springsteen liked her voice, and after the performance, he introduced himself to her. They soon started spending time together and became friends.

Early in 1984, Springsteen asked Scialfa to join the E Street Band for the upcoming Born in the U.S.A. Tour. According to the book Bruce Springsteen on Tour 1969–2005 by Dave Marsh, they seemed about to become a couple through the first leg of the tour, until Barry Bell introduced actress Julianne Phillips to Springsteen and they were married shortly after midnight on May 13, 1985, at Our Lady of the Lake Catholic Church in Lake Oswego, Oregon. Opposites in background, the two had an 11-year age difference, and Springsteen’s traveling took its toll on their relationship. Many of the songs on the Tunnel of Love described the unhappiness he felt in his relationship with Phillips.

The Tunnel of Love Express Tour began in late February 1988 and Springsteen convinced Scialfa to rejoin the tour. She expressed reluctance at first because she wanted to start recording her first solo album, but when he told her the tour would be short, she agreed to postpone her own solo record and join the tour. Phillips and Springsteen separated in the spring of 1988, but the separation was not made public. Springsteen and Scialfa fell in love during the Tunnel of Love Express Tour and started living together soon after his separation from Phillips. Citing irreconcilable differences, Phillips filed for divorce in Los Angeles on August 30, 1988, and a settlement was reached in December and finalized on March 1, 1989.

Springsteen received press criticism for the haste in which he and Scialfa started their relationship. In a 1995 interview with The Advocate, he told Judy Wieder about the negative publicity the couple subsequently received: “It’s a strange society that assumes it has the right to tell people whom they should love and whom they shouldn’t. But the truth is, I basically ignored the entire thing as much as I could. I said, ‘Well, all I know is, this feels real, and maybe I have got a mess going here in some fashion, but that’s life.'” Years later, he reflected, “‘I didn’t protect Juli… some sort of public announcement would have been fair, but I felt overly concerned about my own privacy. I handled it badly, and I still feel badly about it. It was cruel for people to find out the way they did.'”

Springsteen and Scialfa lived in New Jersey before moving to Los Angeles, where they decided to start a family.[160] On July 25, 1990, Scialfa gave birth to the couple’s first child, Evan James Springsteen. On June 8, 1991, Springsteen and Scialfa married at their Los Angeles home in a very private ceremony, only attended by family and close friends. Their second child, Jessica Rae Springsteen, was born on December 30, 1991. Their third child, Samuel Ryan Springsteen, was born on January 5, 1994. In a 1995 interview, Springsteen said, “I went through a divorce, and it was really difficult and painful and I was very frightened about getting married again. So part of me said, ‘Hey, what does it matter?’ But it does matter. It’s very different than just living together. First of all, stepping up publicly—which is what you do: You get your license, you do all the social rituals—is a part of your place in society and in some way part of society’s acceptance of you … Patti and I both found that it did mean something.”

When their children reached school age in the 1990s, Springsteen and Scialfa moved back to New Jersey to raise them away from paparazzi. The family owns and lives on a horse farm in Colts Neck Township and a home in Rumson; they also own homes in Los Angeles and Wellington, Florida. Evan graduated from Boston College; he writes and performs his own songs and won the 2012 Singer/Songwriter Competition held during the Boston College’s Arts Festival. Jessica is a nationally ranked champion equestrian, and graduated from Duke University. She made her show-jumping debut with the Team USA in August 2014. Sam is a Jersey City firefighter.