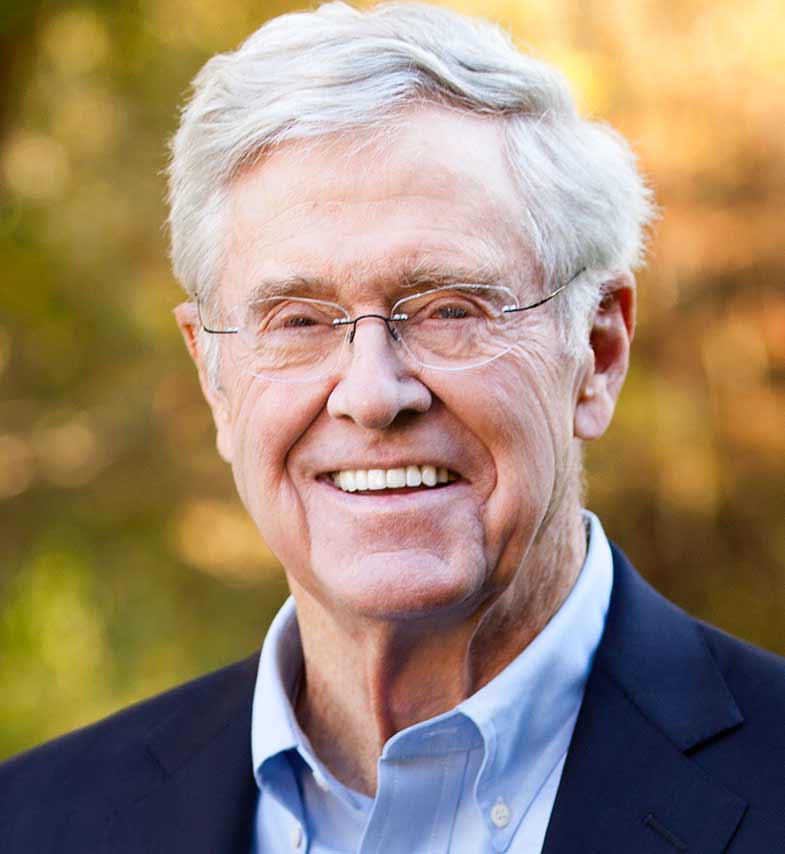 Charles de Ganahl Koch ( born November 1, 1935) is an American billionaire businessman and philanthropist. As of March 2020, he was ranked as the 18th-richest person in the world, with an estimated net worth of $38.2 billion. Koch has been co-owner, chairman, and chief executive officer of Koch Industries since 1967, while his late brother David Koch served as executive vice president. Charles and David each owned 42% of the conglomerate. He was also mentioned in Saving Capitalism. The brothers inherited the business from their father, Fred C. Koch, then expanded the business.

Koch also supports a number of libertarian educational organizations, including the Institute for Humane Studies, the Ayn Rand Institute, and the Mercatus Center at George Mason University. He also contributes to the Republican Party and candidates, libertarian groups, and various charitable and cultural institutions. He co-founded the Washington, D.C.-based Cato Institute. Through the Koch Cultural Trust, founded by Charles Koch’s wife, Elizabeth, the Koch family has also funded artistic projects and creative artists. Along with his brother, Koch has been an important funder of think tanks that lobby to oppose environmental regulation.

Koch was born and lives in Wichita, Kansas, one of four sons of Clementine Mary (née Robinson) and Fred Chase Koch. Koch’s grandfather, Harry Koch, was a Dutch immigrant who settled in West Texas, founded the Quanah Tribune-Chief newspaper, and was a founding shareholder of Quanah, Acme and Pacific Railway. Among his maternal great-great-grandparents were William Ingraham Kip, an Episcopal bishop, William Burnet Kinney, a politician, and Elizabeth Clementine Stedman, a writer.

In an interview with Warren Cassell Jr., which was recorded in February 2016, Koch stated that as a child he did not live a privileged lifestyle despite growing up in a wealthy family. Koch said, “My father wanted me to work as if I was the poorest person in the world.” After attending several private high schools, Koch was educated at the Massachusetts Institute of Technology. He is a member of the Beta Theta Pi fraternity. He received a Bachelor of Science (B.S.) in General Engineering in 1957, a Master of Science (M.S.) in Nuclear Engineering in 1958, and a second M.S. in Chemical Engineering in 1960. His focus was on ways to refine oil.

In 1961 he moved back to Wichita to join his father’s business, Rock Island Oil & Refining Company (now known as Koch Industries). In 1967, he became president of the business, which was then a medium-sized oil firm. In the same year, he renamed the firm Koch Industries in honor of his father. Charles’s brothers Frederick and Bill had inherited stock in Koch Industries. In June 1983, after a legal and boardroom battle, the stakes of Frederick and Bill were bought out for $1.1 billion and Charles and his younger brother David became majority owners in the company. Despite the settlement, legal disputes continued until May 2001, when CBS News reported that Koch Industries settled for $25 million.

In 2006, Koch Industries generated $90 billion in revenue, a growth of 2000 times over, which represents an annual compounded return of 18%. As of 2014, Koch was worth approximately $41.3 billion (in 2013 $36 billion) according to the Forbes 400 list. Koch would routinely work 12-hour days at the office (and then spent more time working at home), weekends, and expected executives at Koch Industries to work weekends as well.

Koch has been a director of INTRUST Financial Corp. since 1982 and director of Koch Industries Inc. since 1982. He is director of resin and fiber company Invista and director of Georgia-Pacific LLC, paper and pulp products. Koch founded or helped found several organizations, including the Cato Institute, the Institute for Humane Studies and the Mercatus Center at George Mason University, the Bill of Rights Institute, and the Market-Based Management Institute. He is a member of the Mont Pelerin Society.

Koch has received various awards and honors, including: