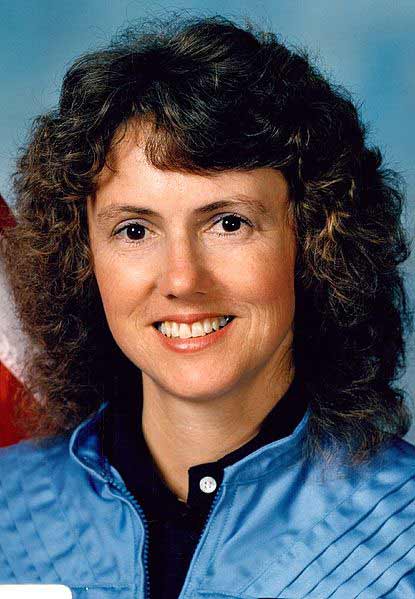 Sharon Christa McAuliffe (née Corrigan; September 2, 1948 – January 28, 1986) was an American teacher and astronaut from Concord, New Hampshire, and one of the seven crew members killed in the Space Shuttle Challenger disaster.

She received her bachelor’s degree in education and history from Framingham State College in 1970 and her master’s degree in education, supervision and administration from Bowie State University in 1978. She took a teaching position as a social studies teacher at Concord High School in New Hampshire in 1983.

In 1985, McAuliffe was selected from more than 11,000 applicants to participate in the NASA Teacher in Space Project and was scheduled to become the first teacher in space. As a member of mission STS-51-L, she was planning to conduct experiments and teach two lessons from Space Shuttle Challenger. On January 28, 1986, the shuttle broke apart 73 seconds after launch. After her death, schools and scholarships were named in her honor, and in 2004 she was posthumously awarded the Congressional Space Medal of Honor.

Sharon Christa Corrigan was born on September 2, 1948 in Boston, the capital of Massachusetts. She was the oldest of the five children of accountant Edward Christopher Corrigan (1922–1990), who was of Irish descent; and Grace Mary Corrigan (1924–2018; née George), a substitute teacher, whose father was of Lebanese Maronite descent. McAuliffe was a great niece of Lebanese-American historian Philip Khuri Hitti. She was known by her middle name from an early age, although in later years she signed her name “S. Christa Corrigan”, and eventually “S. Christa McAuliffe”.

The year she was born, her father was completing his sophomore year at Boston College. Not long after, he took a job as an assistant comptroller in a Boston department store, and they moved to Framingham, Massachusetts, where she attended and graduated from Marian High School in 1966. As a youth, she was inspired by Project Mercury and the Apollo moon landing program. The day after John Glenn orbited the Earth in Friendship 7, she told a friend at Marian High, “Do you realize that someday people will be going to the Moon? Maybe even taking a bus, and I want to do that!” She wrote years later on her NASA application form: “I watched the Space Age being born, and I would like to participate.”

In 1970, she married her longtime boyfriend whom she had known since high school, Steven J. McAuliffe, a 1970 graduate of the Virginia Military Institute, and they moved closer to Washington, D.C., so that he could attend the Georgetown University Law Center. They had two children, Scott and Caroline, who were nine and six, respectively, when she died.

She obtained her first teaching position in 1970, as an American history teacher at Benjamin Foulois Junior High School in Morningside, Maryland. From 1971 to 1978, she taught history and civics at Thomas Johnson Middle School in Lanham, Maryland. In addition to teaching, she completed a Master of Arts in education supervision and administration from Bowie State University in Maryland. In 1978, she moved to Concord, New Hampshire, when Steven accepted a job as an assistant to the New Hampshire Attorney General. McAuliffe taught 7th and 8th grade American history and English in Concord, New Hampshire, and 9th grade English in Bow, New Hampshire, before taking a teaching post at Concord High School in 1983.

She was a social studies teacher, and taught several courses including American history, law, and economics, in addition to a self-designed course: “The American Woman”. Taking field trips and bringing in speakers were an important part of her teaching techniques. According to The New York Times, she “emphasized the impact of ordinary people on history, saying they were as important to the historical record as kings, politicians or generals.”