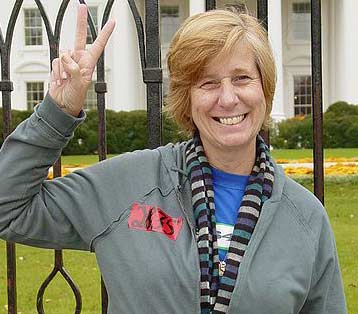 Cindy Lee Miller Sheehan (born July 10, 1957) is an American anti-war activist, whose son, U.S. Army Specialist Casey Sheehan, was killed by enemy action during the Iraq War. She attracted national and international media attention in August 2005 for her extended antiwar protest at a makeshift camp outside President George W. Bush’s Texas ranch—a stand that drew both passionate support and criticism. Sheehan ran unsuccessfully for Congress in 2008. She was a vocal critic of President Barack Obama’s foreign policy. Her memoir, Peace Mom: A Mother’s Journey Through Heartache to Activism, was published in 2006. In an interview with The Daily Beast in 2017, Sheehan continued to hold her critical views towards George W. Bush, while also criticizing the militarism of Donald Trump.

Sheehan was the 2012 vice-presidential nominee of the Peace and Freedom Party, and received 1.2% of the statewide vote in the 2014 California gubernatorial election.

Casey Austin Sheehan (May 29, 1979 – April 4, 2004) was a specialist in the United States Army who was killed during combat action while serving in the Iraq War. He was the son of Patrick Sheehan, a sales representative, and Cindy Sheehan.

In May 2000, Casey Sheehan enlisted in the United States Army as a light-wheeled vehicle mechanic, MOS 63B. It has been reported that he may have considered enlisting as a chaplain assistant MOS 56M. (Sheehan had acted as an altar server during the Palm Sunday mass on the morning of his death).

Near the end of his active service, the U.S. invasion of Iraq began. Sheehan reenlisted, knowing that his unit would be sent there. Sheehan’s division, the First Cavalry Division, was sent to Iraq. On March 19, 2004, Sheehan’s Battery C, 1st Battalion, 82nd Field Artillery Regiment, arrived at FOB Camp War Eagle in Sadr City. On April 4, 2004, Sheehan was killed in action after volunteering to be part of a Quick Reaction Force to rescue American troops in the “Black Sunday” incident that began the Siege of Sadr City.

Casey Sheehan is buried in Vacaville-Elmira Cemetery in Vacaville, California. In May 2006, the tombstone that Casey’s family had been designing and commissioned was finally ready and placed at Casey’s grave. Cindy Sheehan paid for the tombstone herself, which is normally the case, stating, “It is important for the rest of Casey’s family to have one…. I guess the pain of seeing it etched in marble that he is dead is another pain I will have to deal with.” Cindy Sheehan maintains that the U.S. government “should have paid for it because of its responsibility for his death.” The Sheehan family did not want the furnished monument that the government provides because it didn’t reflect Casey’s entire life or personality.

Casey Sheehan was awarded the Purple Heart and Bronze Star with V for Valor posthumously for his actions April 4, 2004. The chapel at Fort Hood started a new Knights of Columbus chapter that was named the Specialist Casey Austin Sheehan Council. His mother, Cindy Sheehan, became a prominent antiwar activist after his death.

In September 2005, Sheehan moved into the Berkeley, California, home of Stephen Pearcy and Virginia Pearcy, where she lived for just over a year, during which time she wrote two books. Also that month, Sheehan met with Senator John McCain, and later called him a “warmonger.” Between 2005 and 2007, Sheehan attended several antiwar events in Sacramento organized by the Pearcys. Also in September 2005, the Bring Them Home Now Tour was organized by Gold Star Families for Peace, Iraq Veterans Against the War, Military Families Speak Out, and Veterans For Peace. Inspired by Sheehan and frequently including Sheehan as a speaker, it was a rolling antiwar protest against the Iraq War, beginning in Crawford, Texas, traveling three routes across the country (with rallies along the way) and culminating in a rally in Washington, D.C., later in September 2005.

Sheehan visited London in early December 2005 and was interviewed by BBC Radio 4 and by The Guardian. On December 10, Sheehan addressed the International Peace Conference, organized by the Stop the War Coalition. Later in the evening, she attended the London Premiere of Peace Mom, a play written by Dario Fo about her, in which the role of Sheehan was played by Frances de la Tour. On December 13, Sheehan traveled to Ireland, where she met Irish Foreign Affairs Minister Dermot Ahern. She voiced her objection to U.S. aircraft refueling at Shannon Airport, stating, “Your government, even though they didn’t send troops to Iraq, are complicit in the crimes by allowing the planes to land and refuel.”

On January 31, 2006, Sheehan wore a T-shirt reading “2,245 Dead. How many more?” to Bush’s State of the Union address and was removed and arrested by Capitol Police.

On March 7, 2006, Sheehan was arrested in New York “after blocking the door to the U.S. Mission to the U.N. offices” during a protest with Iraqi women against the war.

Sheehan and Gold Star Families for Peace were awarded the ‘Domestic Human Rights Award’ by Global Exchange, an international human rights organization based in San Francisco.

Several organizations planned a hunger strike to begin on July 4, 2006; Sheehan stated she would participate. On July 5, Sheehan appeared on MSNBC’s Hardball with Chris Matthews to discuss the war and her upcoming hunger strike. On the show, she called Bush “the biggest terrorist in the world” and “worse than Osama Bin Laden,” and conceded that she would rather live under Venezuela’s Hugo Chávez than Bush. Later that month, Sheehan purchased 5 acres (20,000 m2) of land in Crawford, Texas, near Bush’s private residence.

Cindy Sheehan was born Cindy Lee Miller in Inglewood, California, in 1957. Her father worked at the Lockheed Corporation while her mother raised her family. Sheehan graduated with honors from Cerritos College and studied history at UCLA. She worked as a youth minister at St. Mary’s Catholic Church in Vacaville, California for eight years, and also coordinated an after-school program for at-risk middle school children for the City of Vacaville. In 1977, she married Patrick Sheehan in Norwalk, California; they had four children, including Casey Sheehan (born in 1979), who was killed in action in Iraq on April 4, 2004. Patrick Sheehan filed for divorce on August 12, 2005, citing irreconcilable differences.