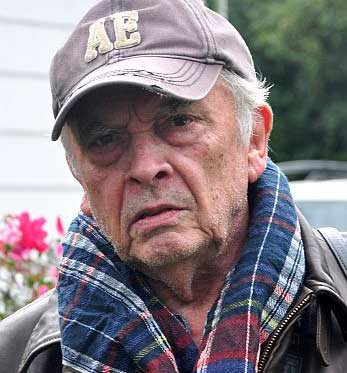 David Royston Bailey CBE (born 2 January 1938) is an English fashion and portrait photographer.
David Bailey was born at Whipps Cross University Hospital in Leytonstone, to Herbert Bailey, a tailor’s cutter, and his wife, Sharon, a machinist. From the age of three he lived in East Ham.

Bailey developed a love of natural history, and this led him into photography. Suffering from undiagnosed dyslexia, he experienced problems at school. He attended a private school, Clark’s College in Ilford, where he says they taught him less than the more basic council school. As well as dyslexia he also has the motor skill disorder dyspraxia (developmental coordination disorder).

In one school year, he claims he only attended 33 times. He left school on his fifteenth birthday, to become a copy boy at the Fleet Street offices of the Yorkshire Post. He raced through a series of dead end jobs, before his call up for National Service in 1956, serving with the Royal Air Force in Singapore in 1957. The appropriation of his trumpet forced him to consider other creative outlets, and he bought a Rolleiflex camera.

He was demobbed in August 1958, and determined to pursue a career in photography, he bought a Canon rangefinder camera. Unable to obtain a place at the London College of Printing because of his school record, he became a second assistant to David Ollins, in Charlotte Mews. He earned £3 10s (£3.50) a week, and acted as studio dogsbody. He was delighted to be called to an interview with photographer John French.

In 1959, Bailey became a photographic assistant at the John French studio, and in May 1960, he was a photographer for John Cole’s Studio Five, before being contracted as a fashion photographer for British Vogue magazine later that year. He also undertook a large amount of freelance work.

Along with Terence Donovan and Brian Duffy, Bailey captured and helped create the ‘Swinging London’ of the 1960s: a culture of fashion and celebrity chic. The three photographers socialised with actors, musicians and royalty, and found themselves elevated to celebrity status. Together, they were the first real celebrity photographers, named by Norman Parkinson “the Black Trinity”.

The film Blowup (1966), directed by Michelangelo Antonioni, depicts the life of a London fashion photographer (played by David Hemmings) whose character was inspired by Bailey. The “Swinging London” scene was aptly reflected in his Box of Pin-Ups (1964): a box of poster-prints of 1960s celebrities including Terence Stamp, The Beatles, Mick Jagger, Jean Shrimpton, PJ Proby, Cecil Beaton, Rudolf Nureyev and notorious East End gangsters, the Kray twins. The Box was an unusual and unique commercial release. It reflected the changing status of the photographer that one could sell a collection of prints in this way. Strong objection to the presence of the Krays by fellow photographer, Lord Snowdon, was the major reason no American edition of the “Box” was released, and that a second British edition was not issued. The record sale for a copy of ‘Box of Pin-Ups’ is reported as “north of £20,000”.

At Vogue Bailey was shooting covers within months, and, at the height of his productivity, he shot 800 pages of Vogue editorial in one year. Penelope Tree, a former girlfriend, described him as “the king lion on the Savannah: incredibly attractive, with a dangerous vibe. He was the electricity, the brightest, most powerful, most talented, most energetic force at the magazine”.

American Vogue’s creative director Grace Coddington, then a model herself, said “It was the Sixties, it was a raving time, and Bailey was unbelievably good-looking. He was everything that you wanted him to be – like the Beatles but accessible – and when he went on the market everyone went in. We were all killing ourselves to be his model, although he hooked up with Jean Shrimpton pretty quickly”.

Bailey has been married four times: in 1960 to Rosemary Bramble; in 1965 to the actress Catherine Deneuve (divorced 1972); in 1975 to American fashion model and writer Marie Helvin; and in 1986 to the model Catherine Dyer (born 20 July 1961), to whom he remains married. He is a long-time vegetarian and refrains from drinking alcohol. An art-lover with a long-held passion for the works of Picasso, his company address is in London and he has a home on Dartmoor, near Plymouth. His youngest son, Sascha Bailey, is an art curator.