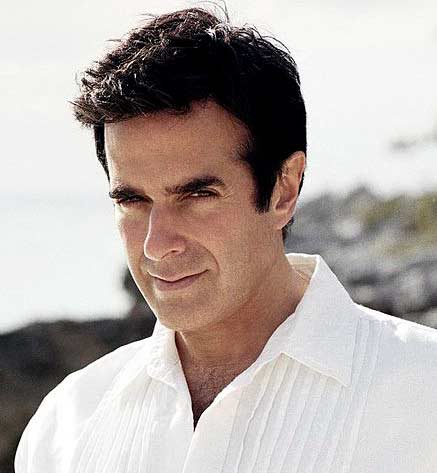 David Seth Kotkin (born September 16, 1956), known professionally as David Copperfield, is an American magician, described by Forbes as the most commercially successful magician in history.

Copperfield’s television specials have won 21 Emmy Awards and 38 nominations. Best known for his combination of storytelling and illusion, Copperfield’s career of over 40 years has earned him 11 Guinness World Records, a star on the Hollywood Walk of Fame, a knighthood by the French government, and he has been named a Living Legend by the US Library of Congress.

As of 2006, Copperfield has sold 33 million tickets and grossed over US$4 billion, more than any other solo entertainer in history. In 2015, Forbes listed his earnings at $63 million for the previous 12 months and ranked him the 20th highest-earning celebrity in the world.

When not performing, he manages his chain of eleven resort islands in the Bahamas, which he calls “Musha Cay and the Islands of Copperfield Bay”.

Copperfield was born David Seth Kotkin in Metuchen, New Jersey, the son of Jewish parents, Rebecca, an insurance adjuster, and Hyman Kotkin, who owned and operated a men’s haberdashery in Warren, New Jersey, called Korby’s. Copperfield’s mother was born in Jerusalem while his paternal grandparents were Jewish immigrants from the USSR (present-day Ukraine). In 1974, Copperfield graduated from Metuchen High School.

When Copperfield was 10, he began practicing magic as “Davino the Boy Magician” in his neighborhood, and at age 12, he became the youngest person admitted to the Society of American Magicians. Shy and a loner, the young Copperfield saw magic as a way to fit in and, later, to meet women. As a child, Copperfield attended Camp Harmony, a day camp in nearby Warren, New Jersey, where he began practicing magic and ventriloquism, an experience to which he credits his creative style. “At Camp Harmony, we spent two weeks searching for a guide who’d been kidnapped by Indians. It was just a game, but I was living it. My whole life goes back to that camp experience when I was three or four.” As a teenager, Copperfield became fascinated with Broadway and frequently sneaked into shows, especially musicals featuring the work of Stephen Sondheim or Bob Fosse. By age 16, he was teaching a course in magic at New York University.

In 1993 at a Berlin celebrity gala Copperfield met German supermodel Claudia Schiffer when he brought her on stage to participate in a mind-reading act and his flying illusion, and in January 1994 they became engaged. During the engagement, Schiffer sometimes appeared on stage with Copperfield to act as his special guest assistant in illusions including being sawn in half. She also appeared alongside Copperfield in David Copperfield: 15 Years of Magic (1994), a documentary in which she played the role of a reporter interviewing him, and at the end of which they reprised their performance of the “Flying” illusion. After a nearly six-year engagement, in September 1999 they announced their separation, citing work schedules.

In April 2006, he and two female assistants were robbed at gunpoint after a performance in West Palm Beach, Florida. His assistants handed over their money, passports, and a cell phone. According to his police statement, Copperfield did not hand over anything, claiming that he used sleight of hand to hide his possessions, although later admitting that doing so was “very stupid. It was a reflex that could have got me shot”. One of the assistants wrote down most of the license plate number, and the suspects were later arrested, charged, and sentenced.

Copperfield’s girlfriend Chloe Gosselin, a French fashion model 28 years his junior, gave birth to his daughter, Sky, in February 2010. This did not become public until The New York Post reported it in August 2011. He’s also the father to a son named Dylan and a daughter named Audrey.