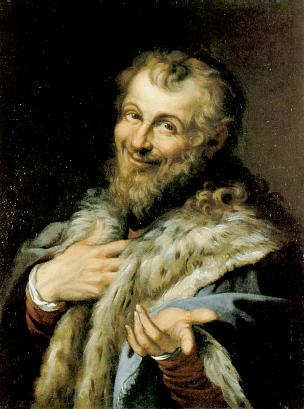 Democritus (/dɪˈmɒkrɪtəs/; Greek: Δημόκριτος, Dēmókritos, meaning “chosen of the people”; c. 460 – c. 370 BC) was an Ancient Greek pre-Socratic philosopher primarily remembered today for his formulation of an atomic theory of the universe.

Democritus was born in Abdera, Thrace, around 460 BC, although there are disagreements about the exact year. His exact contributions are difficult to disentangle from those of his mentor Leucippus, as they are often mentioned together in texts. Their speculation on atoms, taken from Leucippus, bears a passing and partial resemblance to the 19th-century understanding of atomic structure that has led some to regard Democritus as more of a scientist than other Greek philosophers; however, their ideas rested on very different bases. Largely ignored in ancient Athens, Democritus is said to have been disliked so much by Plato that the latter wished all of his books burned. He was nevertheless well known to his fellow northern-born philosopher Aristotle, and was the teacher of Protagoras.

Many consider Democritus to be the “father of modern science”. None of his writings have survived; only fragments are known from his vast body of work.

Democritus was said to be born in the city of Abdera in Thrace, an Ionian colony of Teos, although some called him a Milesian. He was born in the 80th Olympiad (460–457 BC) according to Apollodorus of Athens, and although Thrasyllus placed his birth in 470 BC,[12] the later date is probably more likely. John Burnet has argued that the date of 460 is “too early” since, according to Diogenes Laërtius ix.41, Democritus said that he was a “young man (neos)” during Anaxagoras’s old age (c.440–428). It was said that Democritus’s father was from a noble family and so wealthy that he received Xerxes on his march through Abdera. Democritus spent the inheritance which his father left him on travels into distant countries, to satisfy his thirst for knowledge. He traveled to Asia, and was even said to have reached India and Ethiopia.

It is known that he wrote on Babylon and Meroe; he visited Egypt, and Diodorus Siculus states that he lived there for five years. He himself declared that among his contemporaries none had made greater journeys, seen more countries, and met more scholars than himself. He particularly mentions the Egyptian mathematicians, whose knowledge he praises. Theophrastus, too, spoke of him as a man who had seen many countries. During his travels, according to Diogenes Laërtius, he became acquainted with the Chaldean magi. “Ostanes”, one of the magi accompanying Xerxes, was also said to have taught him.

After returning to his native land he occupied himself with natural philosophy. He traveled throughout Greece to acquire a better knowledge of its cultures. He mentions many Greek philosophers in his writings, and his wealth enabled him to purchase their writings. Leucippus, the founder of atomism, was the greatest influence upon him. He also praises Anaxagoras. Diogenes Laertius says that he was friends with Hippocrates, and he quotes Demetrius saying: “It would seem that he also went to Athens and was not anxious to be recognized, because he despised fame, and that while he knew of Socrates, he was not known to Socrates, his words being, `I came to Athens and no one knew me.'” Aristotle placed him among the pre-Socratic natural philosophers.

The many anecdotes about Democritus, especially in Diogenes Laërtius, attest to his disinterest, modesty, and simplicity, and show that he lived exclusively for his studies. One story has him deliberately blinding himself in order to be less disturbed in his pursuits; it may well be true that he lost his sight in old age. He was cheerful, and was always ready to see the comical side of life, which later writers took to mean that he always laughed at the foolishness of people.

He was highly esteemed by his fellow citizens, because as Diogenes Laërtius says, “he had foretold them some things which events proved to be true,” which may refer to his knowledge of natural phenomena. According to Diodorus Siculus, Democritus died at the age of 90, which would put his death around 370 BC, but other writers have him living to 104, or even 109.

Popularly known as the Laughing Philosopher (for laughing at human follies), the terms Abderitan laughter, which means scoffing, incessant laughter, and Abderite, which means a scoffer, are derived from Democritus. To his fellow citizens he was also known as “The Mocker”.