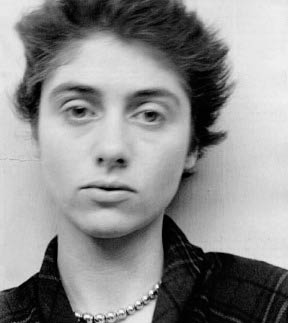 Diane Arbus ( March 14, 1923 – July 26, 1971) was an American photographer. Arbus worked to normalize marginalized groups and highlight the importance of proper representation of all people. She worked with a wide range of subjects including members of the LGBTQ+ community, strippers, carnival performers, nudists, dwarves, children, mothers, couples, elderly people, and middle-class families. She photographed her subjects in familiar settings: their homes, on the street, in the workplace, in the park. “She is noted for expanding notions of acceptable subject matter and violates canons of the appropriate distance between photographer and subject. By befriending, not objectifying her subjects, she was able to capture in her work a rare psychological intensity”. In his 2003 New York Times Magazine article, “Arbus Reconsidered,” Arthur Lubow states, “She was fascinated by people who were visibly creating their own identities—cross-dressers, nudists, sideshow performers, tattooed men, the nouveau riche, the movie-star fans—and by those who were trapped in a uniform that no longer provided any security or comfort.” Michael Kimmelman writes in his review of the exhibition Diane Arbus Revelations, “Her memorable work, which she did, on the whole, not for hire but for herself, was all about heart—a ferocious, audacious heart. It transformed the art of photography (Arbus is everywhere, for better and worse, in the work of artists today who make photographs), and it lent a fresh dignity to the forgotten and neglected people in whom she invested so much of herself.”

In her lifetime she achieved some recognition and renown with the publication, beginning in 1960, of photographs in such magazines as Esquire, Harper’s Bazaar, London’s Sunday Times Magazine, and Artforum. In 1963 the Guggenheim Foundation awarded Arbus a fellowship for her proposal entitled, “American Rites, Manners and Customs”. She was awarded a renewal of her fellowship in 1966. John Szarkowski, the director of photography at the Museum of Modern Art (MoMA) in New York City from 1962 to 1991, championed her work and included it in his 1967 exhibit New Documents along with the work of Lee Friedlander and Garry Winogrand. Her photographs were also included in a number of other major group shows.

In 1972, a year after her suicide, Arbus became the first photographer to be included in the Venice Biennale where her photographs were “the overwhelming sensation of the American Pavilion” and “extremely powerful and very strange.”

The first major retrospective of Arbus’ work was held in 1972 at MoMA, organized by Szarkowski. The retrospective garnered the highest attendance of any exhibition in MoMA’s history to date. Millions viewed traveling exhibitions of her work from 1972 to 1979. The book accompanying the exhibition, Diane Arbus: An Aperture Monograph, edited by Doon Arbus and Marvin Israel and first published in 1972 has never been out of print.

Arbus was born Diane Nemerov to David Nemerov and Gertrude Russek Nemerov, a Jewish couple – immigrants from Soviet Russia – who lived in New York City and owned Russeks, a Fifth Avenue department store. Because of her family’s wealth, Arbus was insulated from the effects of the Great Depression while growing up in the 1930s. Her father became a painter after retiring from Russeks. Her younger sister became a sculptor and designer, and her older brother, the poet Howard Nemerov, taught English at Washington University in St. Louis and was appointed United States Poet Laureate. Howard’s son is the Americanist art historian Alexander Nemerov.

Arbus’s parents were not deeply involved in raising their children, who were overseen by maids and governesses. Her mother had a busy social life and underwent a period of clinical depression for approximately a year, then recovered, and her father was busy with work. She separated herself from her family and her lavish childhood.

Arbus attended the Ethical Culture Fieldston School, a prep school. In 1941, at the age of 18, she married her childhood sweetheart, Allan Arbus, whom she had dated since age 14. Their daughter Doon, who would become a writer, was born in 1945; their daughter Amy, who would become a photographer, was born in 1954. Arbus and her husband worked together in commercial photography from 1946 to 1956, but Allan remained very supportive of her work even after she left the business and began an independent relationship to photography.

Arbus and her husband separated in 1959, although they maintained a close friendship. The couple also continued to share a darkroom., where Allan’s studio assistants processed her negatives, and she printed her work. The couple divorced in 1969 when he moved to California to pursue acting.; he is popularly known for his role as Dr. Sidney Freedman on the television show M*A*S*H. Before his move to California, Allan set up her darkroom, and they thereafter maintained a long correspondence.

In late 1959, Arbus began a relationship with the art director and painter Marvin Israel that would last until her death. All the while, he remained married to Margaret Ponce Israel, an accomplished mixed-media artist. Marvin Israel both spurred Arbus creatively and championed her work, encouraging her to create her first portfolio. Among other photographers and artists she befriended, Arbus was close to photographer Richard Avedon; he was approximately the same age, his family had also run a Fifth Avenue department store, and many of his photographs were also characterized by detailed frontal poses.

Arbus experienced “depressive episodes” during her life, similar to those experienced by her mother; the episodes may have been made worse by symptoms of hepatitis. In 1968, Arbus wrote a letter to a personal friend, Carlotta Marshall, that says: “I go up and down a lot. Maybe I’ve always been like that. Partly what happens though is I get filled with energy and joy and I begin lots of things or think about what I want to do and get all breathless with excitement and then quite suddenly either through tiredness or a disappointment or something more mysterious the energy vanishes, leaving me harassed, swamped, distraught, frightened by the very things I thought I was so eager for! I’m sure this is quite classic.” Her ex-husband once noted that she had “violent changes of mood.” On July 26, 1971, while living at Westbeth Artists Community in New York City, Arbus took her own life by ingesting barbiturates and cutting her wrists with a razor. She wrote the words “Last Supper” in her diary and placed her appointment book on the stairs leading up to the bathroom. Marvin Israel found her body in the bathtub two days later; she was 48 years old. Photographer Joel Meyerowitz told journalist Arthur Lubow, “If she was doing the kind of work she was doing and photography wasn’t enough to keep her alive, what hope did we have?”

No record exists as to the location of her ashes.