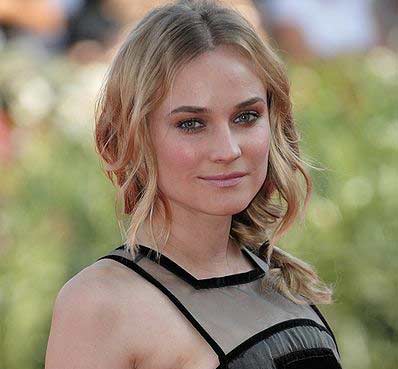 Diane Kruger born 15 July 1976 is a German actress and former fashion model. She has played Helen in the epic war film Troy (2004), Dr. Abigail Chase in the heist film National Treasure (2004) and its sequel (2007), Bridget von Hammersmark in Quentin Tarantino’s war film Inglourious Basterds (2009), and Gina in the psychological thriller film Unknown (2011). She also starred as Detective Sonya Cross in the FX crime drama series The Bridge (2013–14). In 2017, she made her German-language debut in Fatih Akin’s In the Fade, for which she won the Cannes Film Festival Award for Best Actress and Satellite Award for Best Actress.

Kruger was born as Diane Heidkrüger on 15 July 1976 in Algermissen, West Germany, near Hildesheim, the daughter of computer specialist Hans-Heinrich Heidkrüger, and his wife, Maria-Theresa, a bank employee. She was brought up Roman Catholic and attended Catholic school. She has stated that one of her grandmothers was Polish.

She was brought up in West Germany with her younger brother, Stefan. Her mother sent her to student exchange programmes when she was a teenager to improve her English. As a child, Kruger wanted to become a ballerina and successfully auditioned for the Royal Ballet School in London, but a knee injury cut her ballet career short. Later, Kruger moved to Paris where she worked as a model and learned French.

Kruger is fluent in German, English, and French. In 2013, she became an American citizen. In 1999, she began dating the French actor and director Guillaume Canet. They were married on 1 September 2001. They acted together in Joyeux Noël (2005) and divorced in 2006. Kruger said that the marriage was unsuccessful because their careers had kept them in different parts of the world. She dated actor Joshua Jackson from 2006 to 2016.

During the production of the film Sky, in 2015, Kruger met her co-star for that film, Norman Reedus. The two were first seen together as a couple in July 2016. In November 2018, Kruger gave birth to their daughter, her first and his second child.