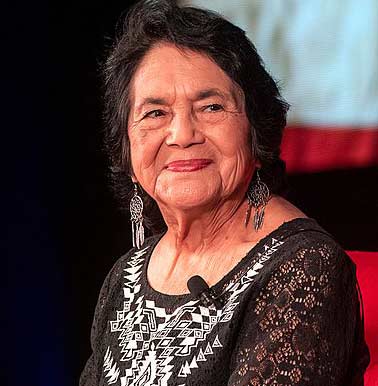 Dolores Clara Fernández Huerta (born April 10, 1930) is an American labor leader and civil rights activist who, with Cesar Chavez, is a co-founder of the National Farmworkers Association, which later became the United Farm Workers (UFW). Huerta helped organize the Delano grape strike in 1965 in California and was the lead negotiator in the workers’ contract that was created after the strike.

Huerta has received numerous awards for her community service and advocacy for workers’, immigrants’, and women’s rights, including the Eugene V. Debs Foundation Outstanding American Award, the United States Presidential Eleanor Roosevelt Award for Human Rights and the Presidential Medal of Freedom. She was the first Latina inducted into the National Women’s Hall of Fame, in 1993.

Huerta is the originator of the phrase, “Sí, se puede”. As a role model to many in the Latino community, Huerta is the subject of many corridos (Mexican or Mexican-American ballads) and murals.

Huerta was born on April 10, 1930, in the mining town of Dawson, New Mexico. She is the second child and only daughter of Juan Fernández and Alicia Chávez. Juan Fernández was born in Dawson to a Mexican immigrant family, and worked as a coal miner. Later, he joined the migrant labor force, and harvested beets in Colorado, Nebraska, and Wyoming. When Huerta was young, she would hear her father tell stories about union organizing. After her parents divorced when she was three years old, she seldom saw her father. He stayed in New Mexico, and served in the state legislature in 1938.

Chávez raised Huerta and her two brothers in the central California farm worker community of Stockton, California. Huerta’s mother was known for her kindness and compassion towards others and was active in community affairs, numerous civic organizations, and the church. She encouraged the cultural diversity that was a natural part of Huerta’s upbringing in Stockton. Alicia Chávez was a businesswoman who owned a restaurant and a 70-room hotel, where she welcomed low-wage workers and farm worker families at affordable prices and sometimes gave them free housing. Huerta was inspired by her mother to advocate for farm workers later on in her life. In an interview Huerta stated that “The dominant person in my life is my mother. She was a very intelligent woman and a very gentle woman”. This prompted Huerta to think about civil rights. Her mother’s generous actions during Dolores’s childhood provided the foundation for her own non-violent, strongly spiritual stance. In the same interview she said, “When we talk about spiritual forces, I think that Hispanic women are more familiar with spiritual forces. We know what fasting is, and that it is part of the culture. We know what relationships are, and we know what sacrifice is”.

Huerta’s community activism began when she was a student at Stockton High School. Huerta was active in numerous school clubs, and was a majorette and dedicated member of the Girl Scouts until the age of 18. She remembered a school teacher accusing her of stealing another student’s work and, as a result, giving her an unfair grade, an act she considers to be rooted in racial bias. Having experienced marginalization during childhood because she was Hispanic, Huerta grew up with the belief that society needed to be changed. She attended college at the University of the Pacific’s Stockton College (later to become San Joaquin Delta Community College), where she earned a provisional teaching credential. After teaching elementary school, Huerta left her job and began her lifelong crusade to correct economic injustice:

I couldn’t tolerate seeing kids come to class hungry and needing shoes. I thought I could do more by organizing farm workers than by trying to teach their hungry children.

CAREER AS AN ACTIVIST

In 1955, Huerta helped Fred Ross start the Stockton Chapter of the Community Service Organization (CSO), which fought for economic improvements for Latinos. Due to her dedication and willingness to serve, Ross often delegated huge responsibilities to her. He knew she was capable of delivering the organization’s message and promoting its agenda. “As she assumed responsibilities and stance that were traditionally held by white males, Huerta encountered criticism based on both gender and ethnic stereotypes”.

In 1960, Huerta co-founded the Agricultural Workers Association, which set up voter registration drives and pressed local governments for barrio improvements. In 1962, she co-founded, with César Chávez, the National Farm Workers Association, which would later become the United Agricultural Workers Organizing Committee. Huerta was the only woman to ever sit on the board of the UFW In 1966, she negotiated a contract between the UFWOC and Schenley Wine Company, marking the first time that farm workers were able to effectively bargain with an agricultural enterprise.

Through her work with the CSO, Huerta met Chávez, its executive director. Chavez thought Huerta was smart, articulate, and self-starting, though had no love of “illegals” whom he thought hurt the cause of legal immigrants.

But Chavez and Huerta quickly realized that they shared a common goal of helping improve the lives and wages of farm workers, so they co-founded the National Farm Workers Association. In 1962, after the CSO turned down Chávez’s request, as their president, to organize farm workers, Chávez and Huerta resigned from the CSO. She went to work for the National Farm Workers Association, which would later merge with the Agricultural Workers Organizing Committee to become the United Farm Workers Organizing Committee. “Dolores’s organizing skills were essential to the growth of this budding organization.”

At the age of only 25, Huerta was a lobbyist in Sacramento for the Stockton Community Service Organization and trained people to do grassroots organizing.

The foundation was later changed to an affiliated agricultural workers organization. In an interview Dolores explained why she wanted to help the farm workers. She explained, she was able to get an inside look on how the farm workers were living and they were by far the most poverty stricken workers. She explained the farm workers were being paid little to nothing, they had no rights, they slept on the floors, their furniture was wooden boxes, did not have clean water, access to bathrooms, would work from sunrise to sundown and were not given any breaks. Many of these workers would travel where the crops were in season, meaning their children did not have a proper education and would often work in the fields along with their parents. She explained that many women were often sexually assaulted by the landowners but were in fear to speak up because their family needed a job. Dolores explained that many of these landowners would justify themselves by saying “we are doing the farm workers and the public a favor by giving these people a job.” she explained that the landowners had received the land and water for free and also expected the labor for free. After Dolores saw the conditions these people were living in, she joined the organization. She explained, laws must be passed in order for these people to get treated fairly which is why she worked hard and put constant pressure to get laws passed. With the help of the organization, she helped champion for the rights of workers in agricultural fields to ensure they were well paid and worked in better conditions.

In 1965, Huerta directed the UFW’s national boycott during the Delano grape strike, taking the plight of the farm workers to the consumers. She led the organization of boycotts advocating for consumer rights. The boycott resulted in the entire California table grape industry signing a three-year collective bargaining agreement with the United Farm Workers in 1970.

Huerta was named one of the three most important women of the year in 1997 by Ms. magazine. She was an inaugural recipient of the Eleanor Roosevelt Award for Human Rights from President Bill Clinton in 1998. That same year, Ladies’ Home Journal recognized her as one of the ‘100 Most Important Women of the 20th Century’, along with such women leaders as Mother Teresa, Margaret Thatcher, Rosa Parks, and Indira Gandhi.

She was awarded the Puffin/Nation Prize for Creative Citizenship in 2002. On September 30, 2005, she became an honorary sister of Kappa Delta Chi sorority (Alpha Alpha chapter – Wichita State University). She received an honorary degree from Princeton University in recognition of her numerous achievements May 2006. She was lauded in the ceremony: “Through her insatiable hunger of justice—La Causa—and her tireless advocacy, she has devoted her life to creative, compassionate, and committed citizenship.” She was co-recipient (along with Virgilio Elizondo) of the 2007 Community of Christ International Peace Award .

On May 18, 2007, she announced her endorsement of Hillary Clinton for president, and at the 2008 Democratic National Convention, Huerta formally placed Clinton’s name into nomination. Also in 2008, Huerta received the “Maggie” Award, highest honor of the Planned Parenthood Federation, in tribute to their founder, Margaret_Sanger.

She was recognized in 2008 by United Neighborhood Centers of America with its highest individual honor, the Jane Addams Distinguished Leadership Award at its National Policy Summit in Washington, D.C. She was awarded the UCLA Medal, UCLA’s highest honor, during the UCLA College of Letters and Science commencement ceremony on June 12, 2009.

In October 2010, Huerta was awarded an honorary degree by Mills College, who lauded her as “a lifetime champion of social justice whose courageous leadership garnered unprecedented national support from farmworkers, women, and underserved communities in a landmark quest for human and civil rights”. The same month, she was awarded an honorary doctorate by University of the Pacific, which unveiled an official portrait of her for the Architects of Peace Project by artist Michael Collopy.

Huerta received the Presidential Medal of Freedom from President Barack Obama on May 29, 2012. She is an Honorary Chair of Democratic Socialists of America and currently serves on the Board of Directors of Equality California.

Huerta was awarded an honorary doctor of humane letters by Mount Holyoke College, where she delivered the commencement address, on May 20, 2017.

Four elementary schools in California; one school in Fort Worth, Texas; and a high school in Pueblo, Colorado, are named after Huerta. Pitzer College, in Claremont, California has a mural in front of Holden Hall dedicated to her. A middle school in the major agricultural city of Salinas, California, which has a dense population of farm workers, was named in 2014 after her. She was a speaker at the first and tenth César Chávez Convocation. In 2013, Huerta received the annual Award for Greatest Public Service Benefiting the Disadvantaged, given by Jefferson Awards.

The intersection of East 1st and Chicago streets in the Los Angeles neighborhood of Boyle Heights is named Dolores Huerta Square.

Asteroid 6849 Doloreshuerta, discovered by American astronomers Eleanor Helin and Schelte Bus at Palomar Observatory in 1979, was named in her honor. The official naming citation was published by the Minor Planet Center on August 27, 2019 (M.P.C. 115893).

Huerta married Ralph Head in college. During their marriage, they had two daughters, Celeste and Lori. After divorcing Head, she married Ventura Huerta, with whom she bore five children. Their son Emilio Jesus Huerta entered politics and ran for Congress. Her second marriage ended in divorce as well, in part because of the significant amount of time that she spent away from the family while campaigning and organizing.

Later, Huerta had a romantic relationship with Richard Chavez, the brother of César Chávez. Huerta and Chávez never married, but the couple had four children during their relationship. Richard Chávez died on July 27, 2011.