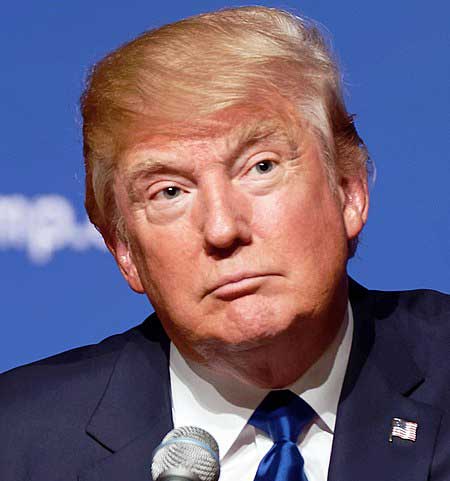 Donald John Trump (born June 14, 1946) is an American media personality and businessman who served as the 45th president of the United States from 2017 to 2021. Born and raised in Queens, New York City, Trump attended Fordham University for two years and received a bachelor’s degree in economics from the Wharton School of the University of Pennsylvania.

He became the president of his father Fred Trump’s real estate business in 1971 and renamed it to The Trump Organization. Trump expanded the company’s operations to building and renovating skyscrapers, hotels, casinos, and golf courses. He later started various side ventures, mostly by licensing his name. Trump and his businesses have been involved in more than 4,000 state and federal legal actions, including six bankruptcies. He owned the Miss Universe brand of beauty pageants from 1996 to 2015. From 2003 to 2015 he co-produced and hosted the reality television series The Apprentice.

Trump’s political positions have been described as populist, protectionist, isolationist, and nationalist. He entered the 2016 presidential race as a Republican and was elected in an upset victory over Democratic nominee Hillary Clinton while losing the popular vote.[a] He became the first U.S. president without prior military or government service and became the oldest-serving president at the time of his inauguration. His election and policies sparked numerous protests. Trump made many false and misleading statements during his campaigns and presidency, to a degree unprecedented in American politics. Many of his comments and actions have been characterized as racially charged or racist.

During his presidency, Trump ordered a travel ban on citizens from several Muslim-majority countries, citing security concerns; after legal challenges, the Supreme Court upheld the policy’s third revision. He enacted a tax-cut package for individuals and businesses, rescinding the individual health insurance mandate penalty of the Affordable Care Act. He signed criminal justice reform and appointed Neil Gorsuch, Brett Kavanaugh and Amy Coney Barrett to the Supreme Court. He reacted slowly to the COVID-19 pandemic, ignored or contradicted many recommendations from health officials in his messaging, and promoted misinformation about unproven treatments and the availability of testing. In foreign policy, Trump pursued an America First agenda: he renegotiated the North American Free Trade Agreement as the U.S.–Mexico–Canada Agreement and withdrew the U.S. from the Trans-Pacific Partnership trade negotiations, the Paris Agreement on climate change and the Iran nuclear deal. He imposed import tariffs which triggered a trade war with China, withdrew U.S. troops from northern Syria, and met three times with North Korean leader Kim Jong-un. Negotiations on denuclearization eventually broke down.

A special counsel investigation led by Robert Mueller found that Trump benefited from Russian interference in the 2016 presidential election, but did not find sufficient evidence to establish criminal conspiracy or coordination with Russia.[b] Mueller also investigated Trump for obstruction of justice and neither indicted nor exonerated him. The House of Representatives impeached Trump in December 2019 for abuse of power and obstruction of Congress after he solicited Ukraine to investigate Joe Biden. The Senate acquitted him of both charges in February 2020.

Trump lost the 2020 presidential election to Biden, but refused to concede defeat. He attempted to overturn the results by making false claims of electoral fraud, pressuring government officials, mounting scores of unsuccessful legal challenges and obstructing the presidential transition. On the day Congress met to tally the electoral votes, January 6, 2021, Trump rallied his supporters and told them to march to the Capitol. When they arrived, hundreds of them broke through security barricades and stormed the Capitol, resulting in the deaths of five people and forcing Congress to evacuate. Seven days later, the House impeached Trump for incitement of insurrection, making him the only federal officeholder in American history to be impeached twice. The Senate acquitted Trump for the second time on February 13, 2021.

Donald John Trump was born on June 14, 1946, at Jamaica Hospital in the borough of Queens in New York City, the fourth child of Fred Trump, a Bronx-born real estate developer whose parents were German immigrants, and Mary Anne MacLeod Trump, an immigrant from Scotland. Trump grew up with older siblings Maryanne, Fred Jr., and Elizabeth, and younger brother Robert in the Jamaica Estates neighborhood of Queens and attended the private Kew-Forest School from kindergarten through seventh grade.

At age 13, he was enrolled in the New York Military Academy, a private boarding school, and in 1964, he enrolled at Fordham University. Two years later he transferred to the Wharton School of the University of Pennsylvania, graduating in May 1968 with a B.S. in economics. The New York Times reported in 1973 and 1976 that he had graduated first in his class at Wharton, but he had never made the school’s honor roll. In 2015, Trump’s lawyer Michael Cohen threatened Fordham University and the New York Military Academy with legal action if they released Trump’s academic records.

While in college, Trump obtained four student draft deferments. In 1966, he was deemed fit for military service based upon a medical examination, and in July 1968 a local draft board classified him as eligible to serve. In October 1968, he was classified 1-Y, a conditional medical deferment, and in 1972, he was reclassified 4-F due to bone spurs, permanently disqualifying him from service.

Trump has written up to 19 books on business, financial, or political topics, though he has used ghostwriters to do this. Trump’s first book, The Art of the Deal (1987), was a New York Times Best Seller. While Trump was credited as co-author, the entire book was ghostwritten by Tony Schwartz. According to The New Yorker, “The book expanded Trump’s renown far beyond New York City, making him an emblem of the successful tycoon.” Trump has called the book his second favorite, after the Bible.

Trump made cameo appearances in eight films and television shows from 1985 to 2001.

Trump had a sporadic relationship with the professional wrestling promotion WWE since the late 1980s. He appeared at WrestleMania 23 in 2007 and was inducted into the celebrity wing of the WWE Hall of Fame in 2013.

Starting in the 1990s, Trump was a guest about 24 times on the nationally syndicated Howard Stern Show.[167] He also had his own short-form talk radio program called Trumped! (one to two minutes on weekdays) from 2004 to 2008. From 2011 until 2015, he was a weekly unpaid guest commentator on Fox & Friends.

In 2003, Trump became the co-producer and host of The Apprentice, a reality show in which Trump played the role of a chief executive and contestants competed for a year of employment at the Trump Organization. Trump eliminated contestants with the catchphrase “You’re fired.” He later co-hosted The Celebrity Apprentice, in which celebrities competed to win money for charities.

Trump, who had been a member since 1989, resigned from the Screen Actors Guild in February 2021 rather than face a disciplinary committee hearing for inciting the January 6, 2021 mob attack on the U.S. Capitol and for his “reckless campaign of misinformation aimed at discrediting and ultimately threatening the safety of journalists.” Two days later, the union permanently barred him from readmission.