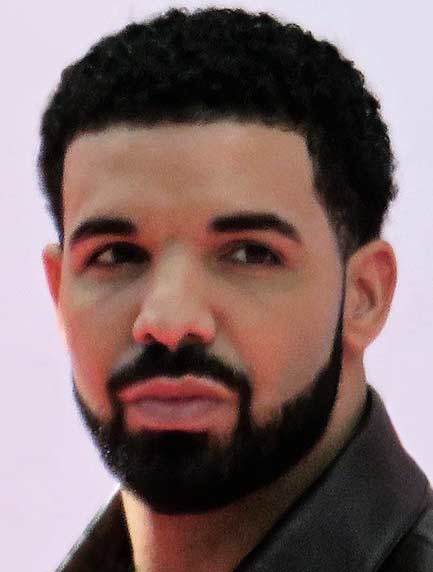 Aubrey Drake Graham (born October 24, 1986) is a Canadian rapper, singer, songwriter, record producer, actor, and entrepreneur. A prominent figure in popular music, Drake is widely credited for popularizing the Toronto sound to the music industry. He initially gained recognition as an actor on the teen drama television series Degrassi: The Next Generation in the 2000s; intent on pursuing a career in music, he left the series in 2007 after releasing his debut mixtape Room for Improvement. He released two further independent projects, Comeback Season and So Far Gone, before signing to Young Money Entertainment in June 2009.

Drake released his debut studio album Thank Me Later in 2010, which debuted at number one on the US Billboard 200. He achieved back-to-back widespread critical successes with his next two albums Take Care (2011) and Nothing Was the Same (2013). Drake’s first commercial mixtape If You’re Reading This It’s Too Late (2015) earned a platinum certification in the US. His fourth album Views (2016) sat atop the Billboard 200 for 13 nonconsecutive weeks, becoming the first album by a male solo artist to do so in over a decade. Marketed as a playlist, Drake’s third commercial mixtape More Life (2017) set multiple streaming records. A year later, he released the double album Scorpion, which produced three number-one singles on the Billboard Hot 100.[12] Drake’s fourth commercial mixtape Dark Lane Demo Tapes (2020) featured the Hot 100 number-one lead single “Toosie Slide”.

As an entrepreneur, Drake founded the OVO Sound record label with longtime collaborator 40 in 2012. In 2016, Drake was announced as the new “global ambassador” for the Toronto Raptors, thereby joining the executive committee of the NBA franchise. In the same year, Drake announced his development with American entrepreneur Brent Hocking of the bourbon whiskey Virginia Black; it eventually broke sale records in Canada. In 2018, Drake was reportedly responsible for 5% ($440 million) of Toronto’s $8.8 billion total annual tourism income.

Among the world’s best-selling music artists, with over 170 million records sold, Drake is ranked as the world’s highest-certified digital singles artist by the Recording Industry Association of America (RIAA). He has won four Grammy Awards, six American Music Awards, a record 27 Billboard Music Awards, two Brit Awards and three Juno Awards. Drake also holds several Billboard chart records; he has the most top 10 hits on the Billboard Hot 100 (tied with Madonna), the most charted songs (209) of any artists in the history of the Billboard Hot 100, the most simultaneously charted Hot 100 songs in a single week (27), the most time on the Hot 100 (431 weeks), and the most Hot 100 debuts in a week (22). He also has the most number-one singles on the Hot Rap Songs, Hot R&B/Hip-Hop Airplay and Rhythmic Charts.

Aubrey Drake Graham was born on October 24, 1986 in Toronto, Ontario. His father, Dennis Graham, is African American and a practising Catholic from Memphis, Tennessee, who worked as a drummer, performing alongside country musician Jerry Lee Lewis. Drake’s mother, Sandra “Sandi” Graham (née Sher), is an Ashkenazi Jewish Canadian who worked as an English teacher and florist. His parents met after Dennis performed at Club Bluenote in Toronto, where he first interacted with Sandra, who was in attendance. He is a dual citizen of the United States and Canada. In his youth, Drake attended a Jewish day school, and formally celebrated a Bar Mitzvah in a religious service.

Drake’s parents divorced when he was five years old. After the divorce, he and his mother remained in Toronto, while his father returned to Memphis, where he was incarcerated for a number of years on drug-related charges. Dennis’ limited finances and legal issues caused him to remain in the United States until Drake’s early adulthood. Prior to his arrest, however, Dennis would travel to Toronto and bring Drake to Memphis every summer. His father later collaborated with Canadian music group Arkells on the music video for a song titled “Drake’s Dad”. Graham claimed in an interview that Drake’s assertions of him being an absent father were embellishments used to sell records, which Drake vehemently denies.

Drake was raised in two Toronto neighbourhoods. He lived on Weston Road in the city’s working-class west end until grade six, playing minor hockey with the Weston Red Wings. He then moved to one of the city’s affluent neighbourhoods, Forest Hill, in 2000. When asked about the move, Drake replied, “[We had] a half of a house we could live in. The other people had the top half, we had the bottom half. I lived in the basement, my mom lived on the first floor. It was not big, it was not luxurious. It was what we could afford.”

He attended Forest Hill Collegiate Institute, where he demonstrated an affinity for the arts, first acting while an active student at the school. He later attended Vaughan Road Academy in the city’s multicultural Oakwood–Vaughan neighbourhood. Due to the economic status associated with the neighbourhood, Drake described the school as “not by any means the easiest school to go to.” Drake was often bullied at school for his racial and religious background, and upon realizing that his busy class schedule was detrimental to his burgeoning acting career, Drake dropped out of school. He later graduated in October 2012.

While Drake’s earlier music primarily spanned hip hop and R&B, his music has delved into pop and trap in recent years. Additionally, his music has drawn influence from regional scenes, including Jamaica’s dancehall and UK drill. Drake is known for his egotistical lyrics, technical ability, and integration of personal backstory when dealing with relationships with women. His vocal abilities have been lauded for an audible contrast between typical hip-hop beats and melody, with sometimes abrasive rapping coupled with softer accents, delivered on technical lyricism. His songs often include audible changes in lyrical pronunciation in parallel with his upbringing in Toronto, and connections with Caribbean and Middle Eastern countries which include such phrases as “ting”, “touching road”, “talkin’ boasy” and “gwanin’ wassy”. Most of his songs contain R&B and Canadian hip hop elements, and he combines rapping with singing. He credits his father with the introduction of singing into his rap mixtapes, which have become a staple in his musical repertoire. His incorporation of melody into technically complex lyrics was supported by Lil Wayne, and has subsequently been a critically acclaimed component to Drake’s singles and albums.

The lyrical content that Drake deploys is typically considered to be emotional or boastful. However, Drake is often revered for incorporating “degrading” themes of money, drug use, and women into newer, idealized contexts, often achieving this through his augmentation of the typical meaning of phrases in which he combines an objective and subjective perspective into one vocal delivery. His songs often maintain tension between “pause and pace, tone timbre, and volume and vocal fermata.” Drake is credited with innovating what has been referred to as “hyper-reality rap”, which is characterized by its focus on themes of celebrity as being distinct from the “real world.”

Drake is the highest-certified digital singles artist ever in the United States, having moved 142 million units. He has had seven songs being certified triple platinum in the U.S. for combined sales plus streaming units as of June 2018 with “Over”, “Too Good”, “Passionfruit”, “Nice for What”, “Marvin’s Room”, “Find Your Love”, and “Energy”. He has also had three exceed 4 million in equivalent units, with “Take Care”, “Headlines”, and “Best I Ever Had”. Three have reached quintuple platinum, with “Jumpman”, “Started from the Bottom”, and “The Motto”. “Hold On, We’re Going Home” marked his first single to accumulate over six million units, while “Forever” became his second in 2018. Two of his singles have reached octuple platinum, with “Hotline Bling” and “One Dance”, while his highest-certified single is “God’s Plan”, which was certified undecuple platinum. Drake’s five solo studio albums, all of which have gone multi-platinum, have received numerous awards and generally positive reviews. Scorpion, his fifth solo album, became his fifth consecutive number one album in the U.S.

Drake also holds several Billboard chart records; he has the most charted songs (209) of any artists in the history of the Billboard Hot 100, the most simultaneously charted Hot 100 songs in a single week (27), the most time on the Hot 100 (431 weeks), and the most Hot 100 debuts in a week (22). He also has the most number-one singles on the Hot Rap Songs, Hot R&B/Hip-Hop Airplay and Rhythmic Charts.

As of 2019, Drake has won a total of 4 Grammy Awards from 42 nominations. He has also won 2 MTV Video Music Awards, and has been ranked by Complex on their “Best Rapper Alive Every Year Since 1979” list, awarding Drake the accolade in 2011, 2012, and 2015. Billboard editor Ernest Baker stated “Drake managed to rule hip-hop in 2014”, adding “the best rapper in 2014 didn’t need a new album or hit single to prove his dominance”. Drake was listed fourth on the Billboard year-end chart for Top Artists of 2015, third on the same chart in 2016 and was named the IFPI Global Recording Artist of 2016. In 2017, he surpassed Adele’s record for most wins at the Billboard Music Awards in one night, winning 13 awards from 22 nominations.

Pitchfork ranked Nothing Was the Same as the 41st best album of the decade “so far”—between 2010 and 2014, and have ranked him in the fifth position in the publication’s list of the “Top 10 Music Artists” since 2010.

Drake lives in Toronto, Ontario, in a 35,000-square-foot, $100 million estate nicknamed “The Embassy”, which was built from the ground-up in 2017 and can be seen in the video to his song “Toosie Slide”. He also has a home in Hidden Hills, California which he has owned since 2012. Additionally, he owns a Toronto condo adjacent to the CN Tower and a Boeing 767 airplane.

Drake’s paternal uncles are bass guitarist Larry Graham and musician Teenie Hodges. Graham achieved both critical and commercial success as a member of the band Sly and the Family Stone, while Hodges featured as the lead guitarist and songwriter for Al Green, and contributed heavily on most of his work in the 1970s, including the hits “Take Me to the River”, “Love and Happiness”, and “Here I Am (Come and Take Me)”.

Drake dated singer Rihanna on-and-off from 2009 to 2016. He has mentioned the relationship in every one of his studio albums, and when presenting Rihanna with the Michael Jackson Video Vanguard Award in 2016, he said “she’s a woman I’ve been in love with since I was 22 years old.” On his former relationship with her, he mused on the talk show The Shop:

As life takes shape and teaches you your own lessons, I end up in this situation where I don’t have the fairy tale, like, ‘Oh, Drake started a family with Rihanna and this is like so perfect.’ It looks so good on paper. By the way, I wanted that too at one time.

Drake is a father to one son named Adonis, who was born on October 11, 2017 to French artist Sophie Brussaux. Brussaux’s pregnancy was the subject of several rumours after featuring in a TMZ article in early 2017; Drake eventually confirmed his fatherhood on the album Scorpion in 2018.