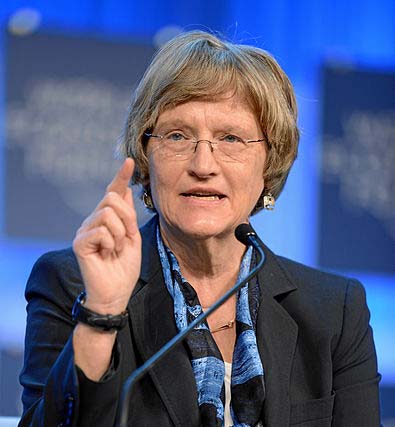 Catharine Drew Gilpin Faust (born September 18, 1947) is an American historian and was the 28th President of Harvard University, the first woman to serve in that role. Faust is the former dean of the Radcliffe Institute for Advanced Study; she was Harvard’s first president since 1672 without an undergraduate or graduate degree from Harvard and the first to have been raised in the South.

In 2014, she was ranked by Forbes as the 33rd most powerful woman in the world.

Drew Gilpin was born in New York City and raised in Clarke County, Virginia, in the Shenandoah Valley. She is the daughter of Catharine Ginna (née Mellick) and McGhee Tyson Gilpin. Her father was a Princeton graduate and breeder of thoroughbred horses. Her paternal great-grandfather, Lawrence Tyson, was a U.S. senator from Tennessee during the 1920s. Faust also has New England ancestry and is a descendant of the Puritan divine Rev. Jonathan Edwards, the third president of Princeton.