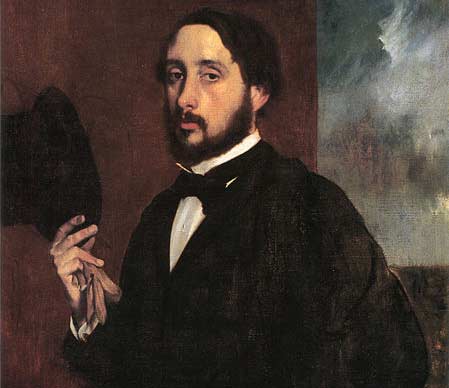 Edgar Degas (19 July 1834 – 27 September 1917) was a French artist famous for his pastel drawings and oil paintings of ballerinas. Degas also produced bronze sculptures, prints, and drawings. Degas is especially identified with the subject of dance; more than half of his works depict dancers. Although Degas is regarded as one of the founders of Impressionism, he rejected the term, preferring to be called a realist, and did not paint outdoors as many Impressionists did. Degas was a superb draftsman, and particularly masterly in depicting movement, as can be seen in his rendition of dancers and bathing female nudes. In addition to ballet dancers and bathing women, Degas painted race horses and racing jockeys, as well as portraits. His portraits are notable for their psychological complexity and for their portrayal of human isolation.

At the beginning of his career, Degas wanted to be a history painter, a calling for which he was well prepared by his rigorous academic training and close study of classical art. In his early thirties, he changed course, and by bringing the traditional methods of a history painter to bear on contemporary subject matter, he became a classical painter of modern life.

Degas was born in Paris, France, into a moderately wealthy family. He was the oldest of five children of Célestine Musson De Gas, a Creole from New Orleans, Louisiana, and Augustin De Gas, a banker. His maternal grandfather Germain Musson, was born in Port-au-Prince, Haiti of French descent and had settled in New Orleans in 1810. Degas (he adopted this less grandiose spelling of his family name when he became an adult) began his schooling at age eleven, enrolling in the Lycée Louis-le-Grand. His mother died when he was thirteen, and the main influences on him for the remainder of his youth were his father and several unmarried uncles.

Degas began to paint early in life. By the time he graduated from the Lycée with a baccalauréat in literature in 1853, at age 18, he had turned a room in his home into an artist’s studio. Upon graduating, he registered as a copyist in The Louvre Museum, but his father expected him to go to law school. Degas duly enrolled at the Faculty of Law of the University of Paris in November 1853, but applied little effort to his studies. In 1855 he met Jean-Auguste-Dominique Ingres, whom Degas revered and whose advice he never forgot: “Draw lines, young man, and still more lines, both from life and from memory, and you will become a good artist.” In April of that year Degas was admitted to the École des Beaux-Arts. He studied drawing there with Louis Lamothe, under whose guidance he flourished, following the style of Ingres. In July 1856, Degas traveled to Italy, where he would remain for the next three years. In 1858, while staying with his aunt’s family in Naples, he made the first studies for his early masterpiece The Bellelli Family. He also drew and painted numerous copies of works by Michelangelo, Raphael, Titian, and other Renaissance artists, but—contrary to conventional practice—he usually selected from an altarpiece a detail that had caught his attention: a secondary figure, or a head which he treated as a portrait.

Degas, who believed that “the artist must live alone, and his private life must remain unknown”, lived an outwardly uneventful life. In company he was known for his wit, which could often be cruel. He was characterized as an “old curmudgeon” by the novelist George Moore, and he deliberately cultivated his reputation as a misanthropic bachelor.

In the 1870s, Degas gravitated towards the republican circles of Léon Gambetta. However, his republicanism did not come untainted and signs of the prejudice and irritability which would overtake him in old age were occasionally manifested. He fired a model upon learning she was Protestant. Although Degas painted a number of Jewish subjects from 1865 to 1870, his anti-Semitism became apparent by the mid-1870s. His 1879 painting Portraits at the Stock Exchange is widely regarded as anti-Semitic, with the facial features of the banker taken directly from the anti-Semitic cartoons rampant in Paris at the time.

The Dreyfus Affair, which divided Paris from the 1890s to the early 1900s, further intensified his anti-Semitism. By the mid-1890s, he had broken off relations with all of his Jewish friends, publicly disavowed his previous friendships with Jewish artists, and refused to use models who he believed might be Jewish. He remained an outspoken anti-Semite and member of the anti-Semitic “Anti-Dreyfusards” until his death.