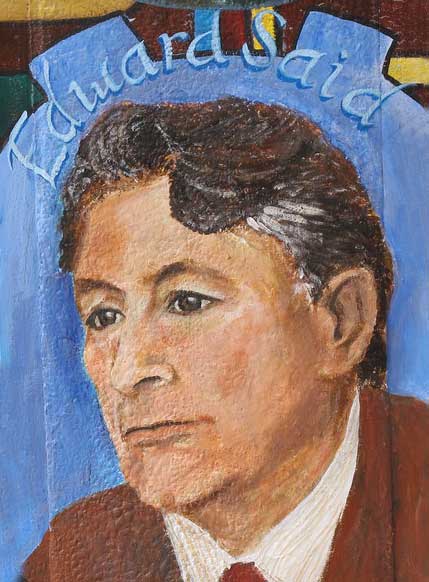 Edward Wadie Said (/sɑːˈiːd/; Arabic: إدوارد وديع سعيد‎ [wædiːʕ sæʕiːd], Idwārd Wadīʿ Saʿīd; 1 November 1935 – 24 September 2003) was a professor of literature at Columbia University, a public intellectual, and a founder of the academic field of postcolonial studies. A Palestinian American born in Mandatory Palestine, he was a citizen of the United States by way of his father, a U.S. Army veteran.

Educated in the Western canon at British and American schools, Said applied his education and bi-cultural perspective to illuminating the gaps of cultural and political understanding between the Western world and the Eastern world, especially about the Israeli–Palestinian conflict in the Middle East; his principal influences were Antonio Gramsci, Frantz Fanon, Aimé Césaire, Michel Foucault, and Theodor Adorno.

As a cultural critic, Said is known for the book Orientalism (1978), a critique of the cultural representations that are the bases of Orientalism—how the Western world perceives the Orient. Said’s model of textual analysis transformed the academic discourse of researchers in literary theory, literary criticism, and Middle-Eastern studies—how academics examine, describe, and define the cultures being studied. As a foundational text, Orientalism was controversial among scholars of Oriental Studies, philosophy, and literature.

As a public intellectual, Said was a controversial member of the Palestinian National Council, due to his public criticism of Israel and the Arab countries, especially the political and cultural policies of Muslim régimes who acted against the national interests of their peoples. Said advocated the establishment of a Palestinian state to ensure equal political and human rights for the Palestinians in Israel, including the right of return to the homeland. He defined his oppositional relation with the status quo as the remit of the public intellectual who has “to sift, to judge, to criticize, to choose, so that choice and agency return to the individual” man and woman.

In 1999, with his friend Daniel Barenboim, Said co-founded the West–Eastern Divan Orchestra, based in Seville. This initiative brings together, every summer, a group of young classical musicians from Israel, the Palestinian territories and Arab countries to study, perform and to promote mutual reflection and understanding. Barenboim and Said jointly received the 2002 Prince of Asturias Awards for their work in “improving understanding between nations”.

Besides being an academic, Said was also an accomplished pianist, and, with Barenboim, co-authored the book Parallels and Paradoxes: Explorations in Music and Society (2002), a compilation of their conversations and public discussions about music held at New York’s Carnegie Hall.

The Barenboim–Said Academy, a joint project Said also developed with Barenboim, was created Berlin. The academy was planned as a site for young music students from the Arab world and Israel to study music and humanities in Berlin. It opened its doors on 8 December 2016.

Edward Wadie Said was born on 1 November 1935, to Hilda Said and Wadie Said, a businessman in Jerusalem, then part of British-governed Mandatory Palestine (1920–48). Wadie Said was a Palestinian man who soldiered in the U.S. Army component of the American Expeditionary Forces (1917–19), commanded by General John J. Pershing, in the First World War (1914–18). Afterwards, that war-time military service earned American citizenship to Said père and his family. Edward’s mother Hilda Said was Lebanese and raised in Nazareth, Ottoman Empire.

In 1919, in partnership with a cousin, Wadie Said established a stationery business in Cairo. Like her husband, Hilda Said was an Arab Christian, and the Said family practiced Protestant Christianity. He and his sister Rosemarie Saïd Zahlan (1937–2006) both pursued an academic careers. Said is said to have become an agnostic in his later years.