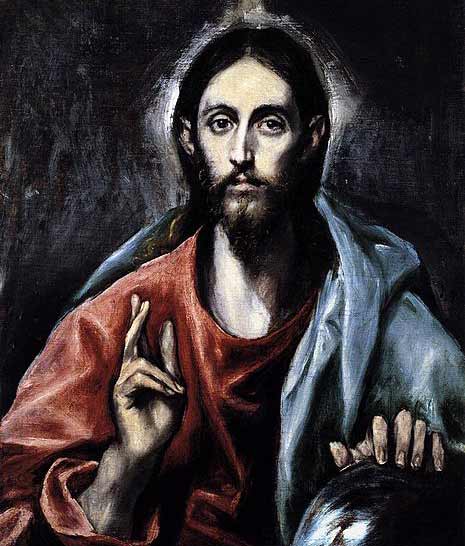 Doménikos Theotokópoulos (1 October 1541 – 7 April 1614), most widely known as El Greco (“The Greek”), was a Greek painter, sculptor and architect of the Spanish Renaissance. “El Greco” was a nickname, a reference to his Greek origin, and the artist normally signed his paintings with his full birth name in Greek letters, Δομήνικος Θεοτοκόπουλος, Doménikos Theotokópoulos, often adding the word Κρής Krēs, Cretan.

El Greco was born in the Kingdom of Candia (modern Crete), which was at that time part of the Republic of Venice, and the center of Post-Byzantine art. He trained and became a master within that tradition before traveling at age 26 to Venice, as other Greek artists had done. In 1570, he moved to Rome, where he opened a workshop and executed a series of works. During his stay in Italy, El Greco enriched his style with elements of Mannerism and of the Venetian Renaissance taken from a number of great artists of the time, notably Tintoretto. In 1577, he moved to Toledo, Spain, where he lived and worked until his death. In Toledo, El Greco received several major commissions and produced his best-known paintings.

El Greco’s dramatic and expressionistic style was met with puzzlement by his contemporaries but found appreciation by the 20th century. El Greco is regarded as a precursor of both Expressionism and Cubism, while his personality and works were a source of inspiration for poets and writers such as Rainer Maria Rilke and Nikos Kazantzakis. El Greco has been characterized by modern scholars as an artist so individual that he belongs to no conventional school. He is best known for tortuously elongated figures and often fantastic or phantasmagorical pigmentation, marrying Byzantine traditions with those of Western painting.

Born in 1541, in either the village of Fodele or Candia (the Venetian name of Chandax, present day Heraklion) on Crete, El Greco was descended from a prosperous urban family, which had probably been driven out of Chania to Candia after an uprising against the Catholic Venetians between 1526 and 1528. El Greco’s father, Geórgios Theotokópoulos (d. 1556), was a merchant and tax collector. Nothing is known about his mother or his first wife, also Greek. El Greco’s older brother, Manoússos Theotokópoulos (1531 – 13 December 1604), was a wealthy merchant and spent the last years of his life (1603–1604) in El Greco’s Toledo home.

El Greco received his initial training as an icon painter of the Cretan school, a leading center of post-Byzantine art. In addition to painting, he probably studied the classics of ancient Greece, and perhaps the Latin classics also; he left a “working library” of 130 volumes at his death, including the Bible in Greek and an annotated Vasari book. Candia was a center for artistic activity where Eastern and Western cultures co-existed harmoniously, where around two hundred painters were active during the 16th century, and had organized a painters’ guild, based on the Italian model.[6] In 1563, at the age of twenty-two, El Greco was described in a document as a “master” (“maestro Domenigo”), meaning he was already a master of the guild and presumably operating his own workshop. Three years later, in June 1566, as a witness to a contract, he signed his name in Greek as μαΐστρος Μένεγος Θεοτοκόπουλος σγουράφος (“Master Ménegos Theotokópoulos, painter”).

Most scholars believe that the Theotokópoulos “family was almost certainly Greek Orthodox”, although some Catholic sources still claim him from birth. Like many Orthodox emigrants to Catholic areas of Europe, some assert that he may have transferred to Catholicism after his arrival, and possibly practiced as a Catholic in Spain, where he described himself as a “devout Catholic” in his will. The extensive archival research conducted since the early 1960s by scholars, such as Nikolaos Panayotakis, Pandelis Prevelakis and Maria Constantoudaki, indicates strongly that El Greco’s family and ancestors were Greek Orthodox. One of his uncles was an Orthodox priest, and his name is not mentioned in the Catholic archival baptismal records on Crete. Prevelakis goes even further, expressing his doubt that El Greco was ever a practicing Roman Catholic.

Important for his early biography, El Greco, still in Crete, painted his Dormition of the Virgin near the end of his Cretan period, probably before 1567. Three other signed works of “Doménicos” are attributed to El Greco (Modena Triptych, St. Luke Painting the Virgin and Child, and The Adoration of the Magi). In 1563, at the age of twenty-two, El Greco was already an enrolled master of the local guild, presumably in charge of his own workshop. He left for Venice a few years later, and never returned to Crete. His Dormition of the Virgin, of before 1567 in tempera and gold on panel was probably created near the end of El Greco’s Cretan period. The painting combines post-Byzantine and Italian Mannerist stylistic and iconographic elements, and incorporates stylistic elements of the Cretan School.