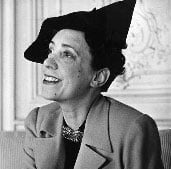 Elsa Schiaparelli (1890–1973) was an Italian fashion designer. Along with Coco Chanel, her greatest rival, she is regarded as one of the most prominent figures in fashion between the two World Wars. Starting with knitwear, Schiaparelli’s designs were heavily influenced by Surrealists like her collaborators Salvador Dalí and Jean Cocteau. Her clients included the heiress Daisy Fellowes and actress Mae West. Schiaparelli did not adapt to the changes in fashion following World War II and her couture house closed in 1954.

Elsa Luisa Maria Schiaparelli was born at the Palazzo Corsini, Rome. Her mother, Maria-Luisa, was a Neapolitan aristocrat. Her father, Celestino Schiaparelli, was an accomplished scholar with multiple areas of interest. His studies focused on the Islamic world and the era of the Middle Ages and he was, in addition, an authority on Sanskrit and a curator of medieval manuscripts. He also served as Dean of the University of Rome, where Schiaparelli would herself later go on to study philosophy. His brother, astronomer Giovanni Schiaparelli, had discovered the so-called canali, or Martian canals, and the young Schiaparelli often studied the heavens with her uncle. A cousin of the brothers, Ernesto Schiaparelli, was a noted Egyptologist who discovered the tomb of Nefertari and was Director of the Museo Egizio in Turin.

The cultural background and erudition of her family members served to ignite the imaginative faculties of Schiaparelli’s impressionable childhood years. She became enraptured with the lore of ancient cultures and religious rites. These sources inspired her to pen a volume of poems titled Arethusa based on the ancient Greek myth of the hunt. The content of her writing so alarmed the conservative sensibilities of her parents that they sought to tame her fantasy life by sending her to a convent boarding school in Switzerland. Once within the school’s confines, Schiaparelli rebelled against its strict authority by going on a hunger strike, leaving her parents to see no alternative but to bring her home again.

Schiaparelli was dissatisfied by a lifestyle that, whilst refined and comfortable, she considered cloistered and unfulfilling. Her craving for adventure and exploration of the wider world led to her taking measures to remedy this, and when a friend offered her a post caring for orphaned children in an English country house, she saw an opportunity to leave. The placement, however, proved uncongenial to Schiaparelli, who subsequently planned a return to the stop-over city of Paris rather than admit defeat by returning to Rome and her family.

In 1954, Schiaparelli published her autobiography Shocking Life and then lived out a comfortable retirement between her Paris apartment and house in Tunisia. She died on 13 November 1973 at the age of 83.