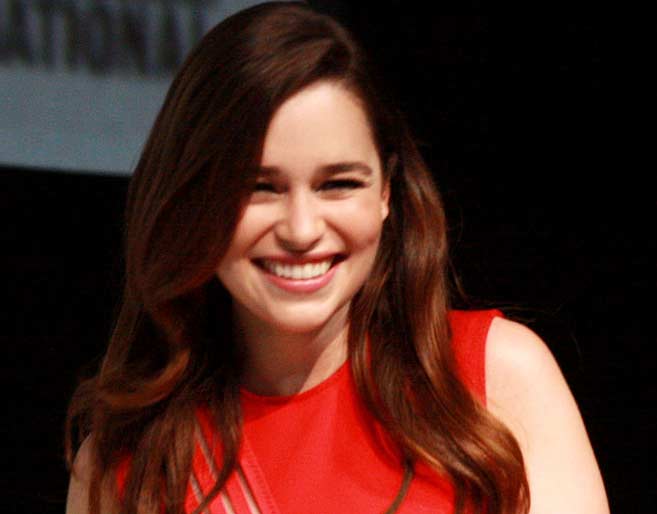 Emilia Isobel Euphemia Rose Clarke (born 23 October 1986) is an English actress. She studied at the Drama Centre London, appearing in a number of stage productions, including one by the Company of Angels. Her television debut came with a guest appearance in an episode of the British medical soap opera Doctors in 2009. The following year, she was named as one of the “UK Stars of Tomorrow” by Screen International magazine for her role in the Syfy film Triassic Attack (2010).

Clarke made her Broadway debut as Holly Golightly in the 2013 play Breakfast at Tiffany’s and played Nina in a West End production of The Seagull that began previews in 2020 before being suspended due to the COVID-19 pandemic. Her film roles include Sarah Connor in the science fiction film Terminator Genisys (2015) and Qi’ra in the Star Wars film Solo: A Star Wars Story (2018). She has also starred in the romantic films Me Before You (2016) and Last Christmas (2019). In 2018, she was honoured by the British Academy of Film and Television Arts with the British Artist of the Year award. Time magazine named her one of the 100 most influential people in the world in 2019.

Clarke was born on 23 October 1986 in London. She grew up in Oxfordshire. Her father, Peter Clarke, was a theatre sound engineer from Wolverhampton, while her mother, Jennifer, is the vice-president for marketing at a global management consultancy firm as of 2020. Clarke’s older brother, Bennett, works in the entertainment industry and was part of the camera department on Game of Thrones.

Clarke said she became interested in acting at the age of three after seeing the musical Show Boat. When she was ten, her father took her to a West End audition for the musical The Goodbye Girl, a musical by Neil Simon. Clarke attended Rye St Antony School in Headington and St Edward’s School, Oxford, which she left in 2005. In a 2016 interview with Time Out magazine, she stated “I went to posh boarding schools, but I wasn’t the posh girl at the posh boarding schools.” She also stated that most of the people at her boarding school in Oxford were from conservative backgrounds, which meant she and some of her friends often felt like outsiders. After graduation, Clarke unsuccessfully applied to RADA, LAMDA, and Guildhall. She worked and travelled before entering the Drama Centre London, from which she graduated in 2009.

Clarke stated in a 2018 interview that her maternal grandmother was the child of a secret affair between Clarke’s great-grandmother and a man from the Indian subcontinent. Her grandmother wore light makeup to hide the darker complexion she had inherited from her father. Clarke credits this background for her family’s having a “history of fighters”, saying: “The fact that [my grandmother] had to hide her skin colour, essentially, and try desperately to fit in with everyone else must’ve been incredibly difficult.” In a Harper’s Bazaar interview, Clarke stated that her grandmother loved India more than she loved England and so, when she died, Clarke, at the age of 16, travelled to India to scatter her ashes.

Clarke lives in Islington, London. In 2016, she purchased a $4.64 million house in Venice Beach, California.

In a March 2019 article she wrote for The New Yorker, she revealed she had a subarachnoid haemorrhage caused by a ruptured aneurysm, in February 2011. She underwent urgent endovascular coiling surgery and subsequently suffered from aphasia; at one point she was unable to recall her own name. She had a second aneurysm surgically treated in 2013.

She was voted the most desirable woman in the world by AskMen readers in 2014. In 2015 she was named Esquire’s Sexiest Woman Alive, and was recognised with the GQ Woman of the Year Award that same year. Men’s lifestyle magazine FHM named Clarke one of the 100 sexiest women in 2015, 2016, and 2017. She was also named in Glamour’s list of Best Dressed Women in 2017.

Once filming concluded on the final season of Game of Thrones, Clarke, as a tribute to her role as Daenerys Targaryen, commemorated her time on the show with a wrist tattoo featuring a trio of flying dragons.

Clarke sings in her spare time and has a contralto voice range.