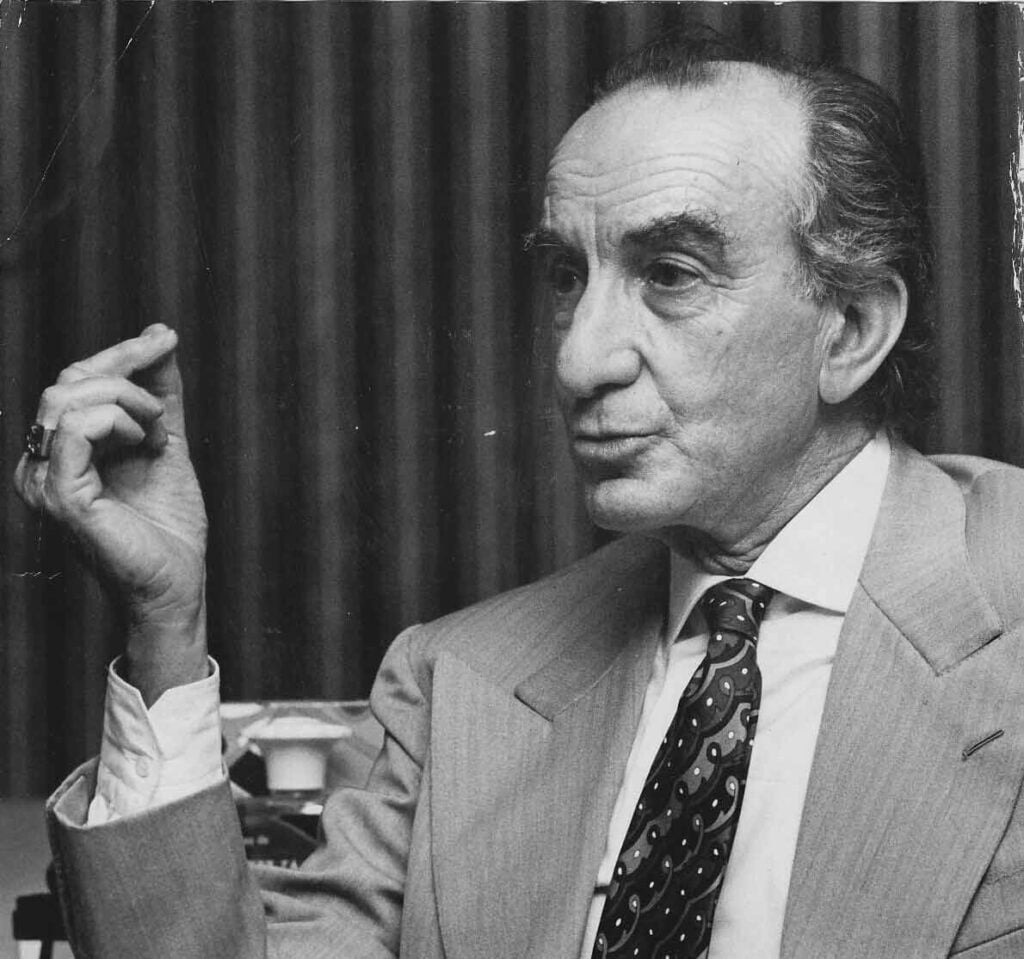 Don Emilio Pucci, Marchese di Barsento (20 November 1914 – 29 November 1992) was a Florentine Italian fashion designer and politician. He and his eponymous company are synonymous with geometric prints in a kaleidoscope of colors.

Pucci was born in Naples in 1914 to one of Florence’s oldest noble families, and he lived and worked in the Pucci Palace in Florence for much of his life. He was a keen sportsman who swam, skied, fenced, played tennis and raced cars.

At the age of 17, Pucci traveled to Lake Placid, New York, as part of the Italian team at the 1932 Winter Olympics, but he did not compete. After two years at the University of Milan, he studied agriculture at the University of Georgia in Athens, Georgia, where he became a member of the Demosthenian Literary Society. In 1935, he was given a full scholarship to Reed College in Oregon in return for developing a college ski team. He earned an MA in social science from Reed College in 1937, and was awarded his doctorate (laurea) in political science from the University of Florence the same year.

The first clothes designed by Pucci were for the Reed College skiing team. His designs came to wider attention in 1947, when he was on leave in Zermatt, Switzerland. Skiwear that he had designed for a female friend was photographed by Toni Frissell, a photographer working for Harper’s Bazaar. Frissell’s editor asked Pucci to design skiwear for a story on European Winter Fashion, which ran in the winter 1948 issue of the Bazaar.

Pucci was the first person to design a one-piece ski suit. Although there had been some experiments with stretch fabrics in Europe before the war, Pucci’s sleek designs caused a sensation, and he received several offers from American manufacturers to produce them.[3] Instead, he left the Air Force and set up an haute couture house in the fashionable resort of Canzone del Mare on the Isle of Capri.

Initially, he used his knowledge of stretch fabrics to produce a swimwear line in 1949, but he soon moved onto other items such as brightly coloured, boldly patterned silk scarves. Stanley Marcus of Neiman Marcus encouraged him to use the designs in blouses and then a popular line of wrinkle-free printed silk dresses. Pucci presented his collection in the first fashion shows in Italy in 1950. Pucci added a boutique in Rome as business thrived, helped by Capri’s role as a destination for the international jet set. By the early 1950s, Pucci was achieving international recognition, receiving the Neiman-Marcus Award in Dallas and the Burdine’s Sunshine Award in Miami. By the 1960s Pucci was further thrust into greater status when Marilyn Monroe became a fan. She was photographed by George Barris in a number of his items in what would be some of her final photographs.

As the decade progressed his designs were worn by everyone from Sophia Loren to Jackie Kennedy. And latter day pop icons such as Madonna in the early 1990s. In fashion history, especially during the period of the 1950s and 1960s, Pucci was a perfect transition example between luxurious couture and ready-to-wear in Europe and the North America.

In 1959, Pucci decided to create a lingerie line. His atelier in Rome advised him to develop the line abroad, avoiding the difficulties of a decade earlier in matching available fabrics to the patterns of his first swimwear line. As a result, Pucci came to Chicago giving the lingerie contract to Formfit-Rogers mills. The venture proved to be successful, and Pucci was made vice president in charge of design and merchandising for the company a year later.

In February 1959, he married Cristina Nannini from Rome about whom he later remarked, “I married a Botticelli”. They had two children, Alessandro and Laudomia. Alessandro died in a car crash in 1998, six years after his father.