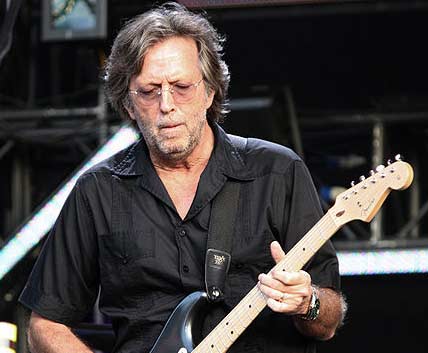 Eric Patrick Clapton, CBE (born 30 March 1945) is an English rock and blues guitarist, singer, and songwriter. He is the only three-time inductee to the Rock and Roll Hall of Fame: once as a solo artist and separately as a member of the Yardbirds and of Cream. Clapton has been referred to as one of the most important and influential guitarists of all time. Clapton ranked second in Rolling Stone’s list of the “100 Greatest Guitarists of All Time”and fourth in Gibson’s “Top 50 Guitarists of All Time”. He was also named number five in Time magazine’s list of “The 10 Best Electric Guitar Players” in 2009.

In the mid-1960s Clapton left the Yardbirds to play with John Mayall & the Bluesbreakers. Immediately after leaving Mayall, Clapton formed the power trio Cream with drummer Ginger Baker and bassist Jack Bruce, in which Clapton played sustained blues improvisations and “arty, blues-based psychedelic pop”. After Cream broke up, he formed blues rock band Blind Faith with Baker, Steve Winwood, and Ric Grech. Clapton’s solo career began in the 1970s, where his work bore the influence of the mellow style of J. J. Cale and the reggae of Bob Marley. His version of Marley’s “I Shot the Sheriff” helped reggae reach a mass market. Two of his most popular recordings were “Layla”, recorded with Derek and the Dominos; and Robert Johnson‘s “Crossroads”, recorded with Cream. Following the death of his son Conor in 1991, Clapton’s grief was expressed in the song “Tears in Heaven”, which appeared on his Unplugged album.

Clapton has been the recipient of 18 Grammy Awards, and the Brit Award for Outstanding Contribution to Music. In 2004 he was awarded a CBE at Buckingham Palace for services to music. He has received four Ivor Novello Awards from the British Academy of Songwriters, Composers and Authors, including the Lifetime Achievement Award. In his solo career, Clapton has sold more than 100 million records worldwide, making him one of the best-selling musicians of all time. In 1998, Clapton, a recovering alcoholic and drug addict, founded the Crossroads Centre on Antigua, a medical facility for recovering substance abusers.

Clapton was born on 30 March 1945 in Ripley, Surrey, England, to 16-year-old Patricia Molly Clapton (7 January 1929 – March 1999) and Edward Walter Fryer (21 March 1920 – 15 May 1985), a 25-year-old soldier from Montreal, Quebec. Fryer shipped off to war prior to Clapton’s birth and then returned to Canada. Clapton grew up believing that his grandmother, Rose, and her second husband, Jack Clapp, Patricia’s stepfather, were his parents, and that his mother was actually his older sister. The similarity in surnames gave rise to the erroneous belief that Clapton’s real surname is Clapp (Reginald Cecil Clapton was the name of Rose’s first husband, Eric Clapton’s maternal grandfather). Years later, his mother married another Canadian soldier and moved to Germany, leaving young Eric with his grandparents in Surrey.

Clapton received an acoustic Hoyer guitar, made in Germany, for his thirteenth birthday, but the inexpensive steel-stringed instrument was difficult to play and he briefly lost interest. Two years later Clapton picked it up again and started playing consistently. Clapton was influenced by the blues from an early age, and practised long hours to learn the chords of blues music by playing along to the records. He preserved his practice sessions using his portable Grundig reel-to-reel tape recorder, listening to them over and over until he felt he’d got it right.

In 1961, after leaving Hollyfield School in Surbiton, Clapton studied at the Kingston College of Art but was dismissed at the end of the academic year because his focus remained on music rather than art. His guitar playing was so advanced that, by the age of 16, he was getting noticed. Around this time, Clapton began busking around Kingston, Richmond, and the West End. In 1962, Clapton started performing as a duo with fellow blues enthusiast David Brock in pubs around Surrey. When he was seventeen years old, Clapton joined his first band, an early British R&B group, the Roosters, whose other guitarist was Tom McGuinness. He stayed with this band from January until August 1963. In October of that year, Clapton did a seven-gig stint with Casey Jones & the Engineers.

Clapton briefly dated funk singer Betty Davis. He married Pattie Boyd in 1979, but their marriage was marred by his infidelities and domestic violence. In an interview with The Sunday Times, Clapton admitted he was abusive to Boyd when he was a “full-blown” alcoholic. In 1984, while recording Behind the Sun, Clapton began a relationship with Yvonne Kelly, the manager of AIR Studios Montserrat. Although both were married to other partners at the time, they had a daughter in January 1985. She was named Ruth Kelly Clapton, but her existence was kept from the public until the media realized she was his child in 1991.

Clapton and Boyd tried unsuccessfully to have children, even trying in vitro fertilisation in 1984, but were faced instead with miscarriages. They divorced in 1989 following his affair with Italian model Lory Del Santo, who gave birth to their son, Conor, on 21 August 1986. Conor died on 20 March 1991 at the age of four after falling out of an open bedroom window on the 53rd floor of a Manhattan apartment building.

In 1998, Clapton, then 53, met 22-year-old administrative assistant Melia McEnery in Columbus, Ohio, at a party given for him after a performance. He quietly dated her for a year, and went public with the relationship in 1999. They married on 1 January 2002 at St Mary Magdalene church in Clapton’s birthplace, Ripley. They have three daughters, Julie Rose (born 13 June 2001), Ella May (born 14 January 2003), and Sophie Belle (born 1 February 2005) His grandson Isaac Eric Owen Bartlett was born in June 2013 to his oldest daughter Ruth and her husband Dean Bartlett.

Clapton is a supporter of the Countryside Alliance, which promotes field sports and issues relating to the British countryside. He has played in concerts to raise funds for the organisation and publicly opposed the Labour Party’s ban on fox hunting with the 2004 Hunting Act. A spokesperson for Clapton said, “Eric supports the Countryside Alliance. He does not hunt himself, but does enjoy rural pursuits such as fishing and shooting. He supports the Alliance’s pursuit to scrap the ban on the basis that he disagrees with the state’s interference with people’s private pursuits”.

Controversy over remarks on immigration

On 5 August 1976, Clapton provoked an uproar and lingering controversy when he spoke out against increasing immigration during a concert in Birmingham. Visibly intoxicated, Clapton voiced his support of controversial political candidate Enoch Powell, and announced on stage that “I think Enoch’s right, I think we should send them all back. Stop Britain from becoming a black colony. Get the foreigners out. Get the wogs out. Get the coons out. Keep Britain white.” “Keep Britain white” was, at the time, a slogan of the far-right National Front (NF). This incident, along with some controversial remarks made around the same time by David Bowie, as well as uses of Nazi-related imagery by punk artists Sid Vicious and Siouxsie Sioux, were the main catalysts for the creation of Rock Against Racism, with a concert on 30 April 1978.

In an interview from October 1976 with Sounds magazine, Clapton said that he was not a political person and that his rambling remarks that night were not appropriate. In a 2004 interview with Uncut, Clapton referred to Powell as “outrageously brave”. He complained that the UK was “… inviting people in as cheap labour and then putting them in ghettos.”In 2004, Clapton told an interviewer for Scotland on Sunday, “There’s no way I could be a racist. It would make no sense.”In his 2007 autobiography, Clapton claimed to be “oblivious to it all.”In a December 2007 interview with Melvyn Bragg on The South Bank Show, Clapton told Bragg that he was not a racist but still believed Powell’s comments were relevant.

In 2009, Surrey Life Magazine ranked Clapton as number 17 in their list of richest Surrey residents, estimating his fortune at £120 million in assets. This was a combination of income, property, a £9 million yacht, Va Bene (previously owned by Bernie Ecclestone), his back music catalogue, his touring income, and his holding company Marshbrook Ltd, which had earned him £110 million since 1989. In 2003, he purchased a 50% share of gentleman’s outfitters Cordings Piccadilly. At the time, owner Noll Uloth was trying to save the shop from closure and is reported to have contacted Clapton, his “best client”; within five minutes, Clapton replied with “I can’t let this happen”.

Since the 1970s, Clapton considered himself a “car enthusiast” and often stated his passion for the Ferrari brand. Clapton currently owns or has owned a range of Ferraris, and when asked about his Ferrari collection in 1989, he said he liked the touring cars the company produces for road use and commented “if I had more space and if I had been wise I would have a huge collection by now and I would be a multi-multi-millionaire”. In 2010, he explained that for him “Ferrari has always been the number one car” to own and drive, and that he always supported Ferrari on the road and in Formula One motor racing.

In 2012, Ferrari honoured Clapton with the one-off special project car, the Ferrari SP12 EC. In July 2013 Clapton displayed it at the Goodwood Festival of Speed in England in the Michelin Supercar Run. In 2014, Clapton explained that Ferrari is still his favourite car brand. Among the other vehicles Clapton owns or has owned are a vintage Mini Cooper Radford that was a gift from George Harrison.

Clapton is a fan of English football club West Bromwich Albion. In 1982 he performed a concert before West Brom player John Wile’s testimonial game at The Hawthorns. It has been reported that the club rejected his offer to invest cash in the club around this time. In the late 1970s Clapton positioned a West Brom scarf on the back cover of his album, Backless. In the 1978–79 season Clapton sponsored West Brom’s UEFA Cup home game against Turkish club Galatasaray.