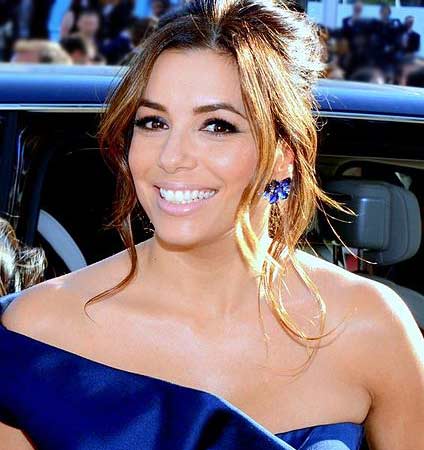 Eva Jacqueline Bastón (née Longoria; born March 15, 1975) is an American actress, producer, director, activist, and businesswoman. After a number of guest roles on several television series, Longoria was recognized for her portrayal of Isabella Braña on the CBS daytime soap opera The Young and the Restless, on which she starred from 2001 to 2003. She is most known for her role as Gabrielle Solis on the television series Desperate Housewives, which ran from 2004 to 2012 and for which she received Golden Globe and Screen Actors Guild Award nominations. She has also appeared in The Sentinel (2006), Over Her Dead Body (2008), For Greater Glory (2012), Frontera (2014), Lowriders (2016), and Overboard (2018). From 2015 to 2016, Longoria starred as Ana Sofia Calderón on the short-lived NBC sitcom Telenovela, and served as an executive producer for the Lifetime television series Devious Maids. She has also served as an executive producer of social issue documentaries, including Food Chains and The Harvest.

Longoria has appeared in several advertising campaigns. She has been named one of Hollywood’s most beautiful women by several publications, including People en Español and People magazines. She currently holds modeling contracts with L’Oréal and New York & Co, among others.

One of her sisters had special needs. She told Redbook in 2016:
There was never any resentment, because I saw how hard my mother worked and all she did for my sister [with special needs], and I wanted to do whatever I could to help. We all did.

She was raised Roman Catholic. She did not speak Spanish growing up, and did not learn the language until 2009. While in high school, she worked at a Wendy’s restaurant part-time for three years to help earn money for her quinceañera. Longoria previously told the press how her years in fast food as a teen shaped her work ethic.
I couldn’t wait to get to work and make my own money.

Longoria earned her Bachelor of Science degree in kinesiology at Texas A&M University-Kingsville. During this time, she won the title of Miss Corpus Christi USA in 1998. After completing college, Longoria entered a talent contest that led her to Los Angeles; shortly after, she was spotted and signed by a theatrical agent. While auditioning for roles, Longoria worked as a headhunter for four years.

She received her master’s degree in Chicano Studies from California State University, Northridge, in May 2013 following three years of study. Her thesis was entitled, “Success STEMS From Diversity: The Value of Latinas in STEM Careers”.

Longoria was married to actor Tyler Christopher, star of General Hospital, from 2002 to 2004.

Longoria met Tony Parker, then the point guard for the San Antonio Spurs, in November 2004. On November 30, 2006, the couple became engaged. They married in the civil service on July 6, 2007, at a Paris city hall. They had a Catholic wedding ceremony at the Saint-Germain l’Auxerrois Church in Paris on July 7, 2007. On November 17, 2010, Longoria filed for divorce from Parker in Los Angeles, citing “irreconcilable differences”. In the divorce petition, Longoria requested that her maiden name be restored. She also sought spousal support from Parker. The couple had a prenuptial agreement that was signed in June 2007, a month before their wedding, and amended two years later in June 2009.

Longoria told her friend, Mario Lopez, she had discovered hundreds of text messages from another woman on her husband’s phone. Extra identified the other woman as Erin Barry, the then-wife of Brent Barry, Parker’s former teammate, and revealed that the Barrys also were in the process of divorcing. In light of the divorce, Longoria canceled her scheduled appearance at the 2010 American Music Awards. On November 19, 2010, Parker filed for divorce from Longoria in Bexar County, Texas, on the grounds of “discord or conflict of personalities”, thus establishing a legal battle over where the divorce case would be heard. Unlike Longoria’s divorce petition, Parker did not mention a prenuptial agreement and claimed that the parties would “enter into an agreement for the division of their estate”. The divorce was finalized in Texas on January 28, 2011, the same day Longoria’s lawyer filed papers to dismiss her Los Angeles petition. Longoria would later comment, “I didn’t realize it at the time with Tony, but I had become my own version of a desperate housewife.”

On December 13, 2015, Longoria reported her engagement to Mexican businessman José Antonio “Pepe” Bastón Patiño, then the president of Televisa, the largest media company in Latin America. Bastón and Longoria met on a blind date arranged by a mutual friend in Mexico City; at the time, Bastón did not know who Longoria was and originally declined the invitation to meet her because of his busy schedule. The couple was married in Mexico on May 21, 2016.

According to research done in 2010 by Harvard professor and Faces of America host Henry Louis Gates, Jr., Longoria’s oldest identifiable Spanish immigrant ancestor is her ninth great-grandfather, Lorenzo Suárez de Longoria (b. Oviedo, 1592), who immigrated to the Viceroyalty of New Spain (modern-day Mexico) in 1603. His family was based in a small village called Longoria, Belmonte de Miranda, Asturias, Spain. Longoria is the Castellanized form of this Asturian-language surname.

In 1767, her seventh great-grandfather received almost 4,000 acres (16 km2) of land along the Rio Grande in a land grant from King Charles III of Spain. The family retained this land for more than a century. After the US-Mexican border was moved southwards in the aftermath of the Mexican–American War, the land ended up on the American side of the border. Her family had to deal with the influx of United States settlers following the Mexican–American War and the American Civil War.

According to DNA testing, Longoria’s overall genetic ancestry is 70% European, 27% Asian and Indigenous, and 3% African. After a computer compared the DNA results of Gates’s dozen guests, tests showed that she is genetically related to cellist Yo-Yo Ma, who is of Chinese heritage. Since women have two X chromosomes and no Y chromosome, Longoria did not inherit her father’s Y-DNA, but she did inherit her mother’s mitochondrial DNA (genetic information passed from mother to child). Longoria’s mtDNA belongs to the Haplogroup A2, making her a direct descendant of a Native American woman, a Mayan from the territory of Mexico long before it was Mexico. Her ancestors include many other Mayans on both sides of her family.