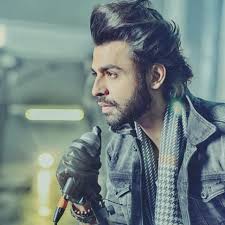 Farhan Saeed (born 14 September 1984) is a Pakistani singer-songwriter, actor, director, and entrepreneur. Farhan was the former lead vocalist of the Pakistani band Jal and is the owner of the restaurant Cafe Rock in Lahore. He has sung in Urdu as well as in Punjabi. Since 2014 he also turned towards acting, and gained recognition for his role in Hum TV’s serial Udaari (2016) and for his leading role in Hum TV’s another serial Suno Chanda (2018).

Farhan Saeed was born on September 14, 1984 into a Kashmiri family. Both his parents are practising doctors. Music fan from the very start, he used to listen to Vital Signs and Junoon and centred his music around pop, and at times folk. In his teens, he took A-Level from Keynesian Institute of Management and Sciences(KIMS) and then enrolled for Computer Sciences to National University of Computer and Emerging Sciences, after which he discovered his future band members in Atif and Gohar. The band took off and got famous across entire Asia for their brilliant brand of music. In 2011, reports broke out that he had parted his ways from Jal, which left his fans stunned. He pursued a solo career and became regular to feature in Bollywood. Saeed opened Cafe Rock restaurant at Hussain Chowk, situated off the M. M. Alam Road, Gulberg, Lahore. The restaurant follows the theme/trend of Hard Rock Cafes, providing underground bands and young aspiring artists with a platform to project themselves and perform in front of an audience. He married Urwa Hocane on 16 December 2016.

He made his Bollywood-singing breakthrough in 2014, by contributing a song to Vikram Bhatt’s Creature 3D. The song, Naam-e-Wafa, is a romantic-duet with Indian vocalist Tulsi Kumar as the co-singer and Mithoon as the composer.

Farhan started his acting career by debuting in a leading role in the 2014 Hum TV drama serial De Ijazat Jo Tu alongside Sohai Ali Abro, Saba Hameed and Javaid Sheikh. He then played the lead role as Mohid Shuja in ARY Digital’s Mere Ajnabi alongside Urwa Hocane who was the female lead. He has also played a lead role of Arsh in the drama Udaari as a lawyer along with female lead Urwa. Apart from acting in the drama, Farhan has also collaborated with Hadiqa Kiani for the OST that has topped music charts all over Pakistan.

In 2018 he grabbed the leading role of Arsal Jamshed Ali (Arsal) in Hum TV’s hit drama serial Suno Chanda, with Iqra Aziz as the leading female role, and due to the critical success of the show, a season 2 was immediately announced by the producers.

He had the leading role in Karachi Se Lahore 3 with Kubra Khan as co-star, the third installment of Wajahat Rauf’s successful series including the box-office hits Karachi Se Lahore and Lahore Se Aagey, and which would have been his feature film debut, but he had to quit the project because of music tours and concerts he was already committed to.

In early 2019 it was announced that he’ll get his first lead role in a movie in Tich Button, a rom-com co-produced by his wife Urwa Hocane under their joint new production company Shooting Star Studio.