Photo: Getty | Russian cosmonaut Yuri Gagarin completed a circuit of the earth in 1961

Yuri Gagarin first man in space.12th of April 1961. Yuri Gagarin was born near Moscow, Russia on March 9th, 1934, and was the son of a carpenter.

Yuri joins the Soviet Air Force in 1955 and by 1959 he was training to become a cosmonaut.

In 1960, Gagarin was chosen alongside 19 different possibilities for the Vostok 1 program. In the long run, the program was limited to two potential applicants.

Gagarin and Gherman Titov both had excellent performance in their training and were short enough to fit in the Vostok cockpit.

Gagarin was perhaps selected because of his modest background which suited Soviet Union propaganda.

But also because of the other candidates who voted for him. His excellent memory skills, fast reactions, and mathematical skills.

At age 27 on the morning of 12th of April 1961 Cosmonaut Yuri Gagarin was helped into his spacesuit and made his way to the launch pad. He climbed into the Vostok spacecraft.

Wondering if he would return back to earth but was calm.

separated from the launch rocket. 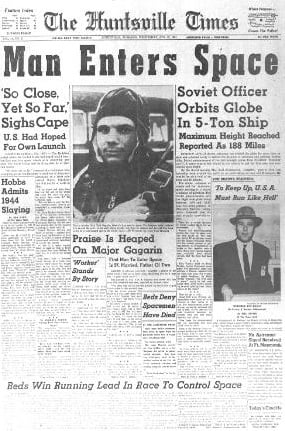 Gagarin was in space. He crossed the Atlantic Ocean than the Pacific Ocean and as his spacecraft passed over Africa he prepared to re-enter the Earth’s atmosphere. Which would not be easy.

He had orbited earth for 108 minutes during the flight as he made re-entry the cables joining the Vostok descent module to the service module failed to detach properly. Almost causing disaster as it violently shook Gagarin. Until they eventually pulled apart. As he re-entered Earth’s atmosphere he experienced forces up to eight times the pull of gravity.

But remained conscious. Because the Vostok spacecraft had no engines to slow down its reentry upon landing Gagarin had to eject out and parachute to Earth.

He landed safely near the Volga river. Yuri Gagarin was made a national hero of the Soviet Union. It became a global celebrity.

He died on March 27th, 1968, during an accident in a military training flight. He was just 34 years old.