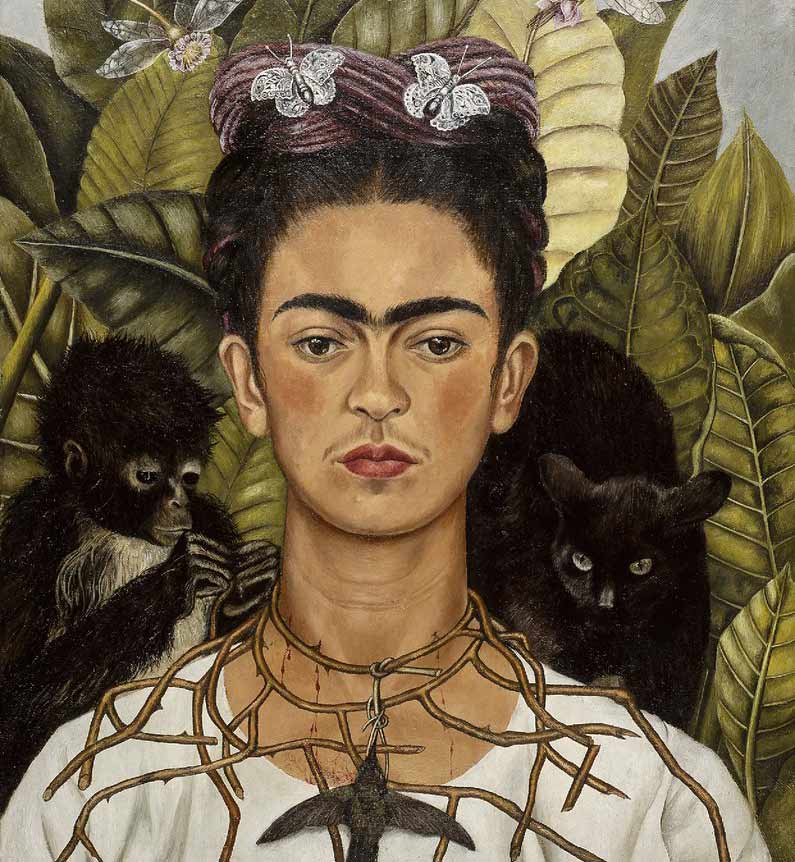 Frida Kahlo (born Magdalena Carmen Frida Kahlo y Calderón; 6 July 1907 – 13 July 1954) was a Mexican painter known for her many portraits, self-portraits, and works inspired by the nature and artifacts of Mexico. Inspired by the country’s popular culture, she employed a naïve folk art style to explore questions of identity, postcolonialism, gender, class, and race in Mexican society. Her paintings often had strong autobiographical elements and mixed realism with fantasy. In addition to belonging to the post-revolutionary Mexicayotl movement, which sought to define a Mexican identity, Kahlo has been described as a surrealist or magical realist.

Born to a German father and a mestiza mother, Kahlo spent most of her childhood and adult life at La Casa Azul, her family home in Coyoacán—now publicly accessible as the Frida Kahlo Museum. Although she was disabled by polio as a child, Kahlo had been a promising student headed for medical school until she suffered a bus accident at the age of eighteen, which caused her lifelong pain and medical problems. During her recovery she returned to her childhood hobby of art with the idea of becoming an artist.

Kahlo’s interests in politics and art led her to join the Mexican Communist Party in 1927, through which she met fellow Mexican artist Diego Rivera. The couple married in 1929, and spent the late 1920s and early 1930s travelling in Mexico and the United States together. During this time, she developed her artistic style, drawing her main inspiration from Mexican folk culture, and painted mostly small self-portraits which mixed elements from pre-Columbian and Catholic beliefs. Her paintings raised the interest of Surrealist artist André Breton, who arranged for Kahlo’s first solo exhibition at the Julien Levy Gallery in New York in 1938; the exhibition was a success, and was followed by another in Paris in 1939. While the French exhibition was less successful, the Louvre purchased a painting from Kahlo, The Frame, making her the first Mexican artist to be featured in their collection.[1] Throughout the 1940s, Kahlo participated in exhibitions in Mexico and the United States and worked as an art teacher. She taught at the Escuela Nacional de Pintura, Escultura y Grabado (“La Esmeralda”) and was a founding member of the Seminario de Cultura Mexicana. Kahlo’s always-fragile health began to decline in the same decade. She had her first solo exhibition in Mexico in 1953, shortly before her death in 1954 at the age of 47.

Kahlo’s work as an artist remained relatively unknown until the late 1970s, when her work was rediscovered by art historians and political activists. By the early 1990s, she had become not only a recognized figure in art history, but also regarded as an icon for Chicanos, the feminism movement and the LGBTQ+ movement. Kahlo’s work has been celebrated internationally as emblematic of Mexican national and indigenous traditions and by feminists for what is seen as its uncompromising depiction of the female experience and form.

Kahlo enjoyed art from an early age, receiving drawing instruction from printmaker Fernando Fernández (who was her father’s friend) and filling notebooks with sketches. In 1925, she began to work outside of school to help her family. After briefly working as a stenographer, she became a paid engraving apprentice for Fernández. He was impressed by her talent, although she did not consider art as a career at this time.

After a bus accident in 1925 left Kahlo unable to walk for three months, Kahlo began to paint in order to pass the time. She started to consider a career as a medical illustrator, as well, which would combine her interests in science and art. Her mother provided her with a specially-made easel, which enabled her to paint in bed, and her father lent her some of his oil paints. She had a mirror placed above the easel, so that she could see herself. Painting became a way for Kahlo to explore questions of identity and existence. She explained, “I paint myself because I am often alone and I am the subject I know best.” She later stated that the accident and the isolating recovery period made her desire “to begin again, painting things just as [she] saw them with [her] own eyes and nothing more.”

Most of the paintings Kahlo made during this time were portraits of herself, her sisters, and her schoolfriends. Her early paintings and correspondence show that she drew inspiration especially from European artists, in particular Renaissance masters such as Sandro Botticelli and Bronzino and from avant-garde movements such as Neue Sachlichkeit and Cubism.

On moving to Morelos in 1929 with her husband Rivera, Kahlo was inspired by the city of Cuernavaca where they lived. She changed her artistic style and increasingly drew inspiration from Mexican folk art. Art historian Andrea Kettenmann states that she may have been influenced by Adolfo Best Maugard’s treatise on the subject, for she incorporated many of the characteristics that he outlined—for example, the lack of perspective and the combining of elements from pre-Columbian and colonial periods of Mexican art. Her identification with La Raza, the people of Mexico, and her profound interest in its culture remained important facets of her art throughout the rest of her life.

Magdalena Carmen Frida Kahlo y Calderón was born on 6 July 1907 in Coyoacán, a village on the outskirts of Mexico City. Kahlo stated that she was born at the family home, La Casa Azul (The Blue House), but according to the official birth registry, the birth took place at the nearby home of her maternal grandmother. Kahlo’s parents were photographer Guillermo Kahlo (1871–1941) and Matilde Calderón y González (1876–1932), and they were thirty-six and thirty, respectively, when they had her. Originally from Germany, Guillermo had immigrated to Mexico in 1891, after epilepsy caused by an accident ended his university studies.[136] Although Kahlo claimed that her father was Jewish, he was in fact a Lutheran. Matilde was born in Oaxaca to an Indigenous father and a mother of Spanish descent. In addition to Kahlo, the marriage produced daughters Matilde (c. 1898–1951), Adriana (c. 1902–1968), and Cristina (c. 1908–1964). She had two half-sisters from Guillermo’s first marriage, María Luisa and Margarita, but they were raised in a convent.
Kahlo later described the atmosphere in her childhood home as often “very, very sad”. Both parents were often sick, and their marriage was devoid of love. Her relationship with her mother, Matilde, was extremely tense. Kahlo described her mother as “kind, active and intelligent, but also calculating, cruel and fanatically religious.” Her father Guillermo’s photography business suffered greatly during the Mexican Revolution, as the overthrown government had commissioned works from him, and the long civil war limited the number of private clients.

When Kahlo was six years old, she contracted polio, which made her right leg shorter and thinner than the left. The illness forced her to be isolated from her peers for months, and she was bullied. While the experience made her reclusive, it made her Guillermo’s favorite due to their shared experience of living with disability. Kahlo credited him for making her childhood “marvelous… he was an immense example to me of tenderness, of work (photographer and also painter), and above all in understanding for all my problems.” He taught her about literature, nature, and philosophy, and encouraged her to play sports to regain her strength, despite the fact that most physical exercise was seen as unsuitable for girls. He also taught her photography, and she began to help him retouch, develop, and color photographs.

Due to polio, Kahlo began school later than her peers. Along with her younger sister Cristina, she attended the local kindergarten and primary school in Coyoacán and was homeschooled for the fifth and sixth grades. While Cristina followed their sisters into a convent school, Kahlo was enrolled in a German school due to their father’s wishes. She was soon expelled for disobedience and was sent to a vocational teachers school. Her stay at the school was brief, as she was sexually abused by a female teacher.

In 1922, Kahlo was accepted to the elite National Preparatory School, where she focused on natural sciences with the aim of becoming a doctor. The institution had only recently begun admitting women, with only 35 girls out of 2,000 students. She performed well academically, was a voracious reader, and became “deeply immersed and seriously committed to Mexican culture, political activism and issues of social justice”. The school promoted indigenismo, a new sense of Mexican identity that took pride in the country’s indigenous heritage and sought to rid itself of the colonial mindset of Europe as superior to Mexico. Particularly influential to Kahlo at this time were nine of her schoolmates, with whom she formed an informal group called the “Cachuchas” – many of them would become leading figures of the Mexican intellectual elite. They were rebellious and against everything conservative and pulled pranks, staged plays, and debated philosophy and Russian classics. To mask the fact that she was older and to declare herself a “daughter of the revolution”, she began saying that she had been born on 7 July 1910, the year the Mexican Revolution began, which she continued throughout her life. She fell in love with Alejandro Gomez Arias, the leader of the group and her first love. Her parents did not approve of the relationship. Arias and Kahlo were often separated from each other, due to the political instability and violence of the period, so they exchanged passionate love letters.