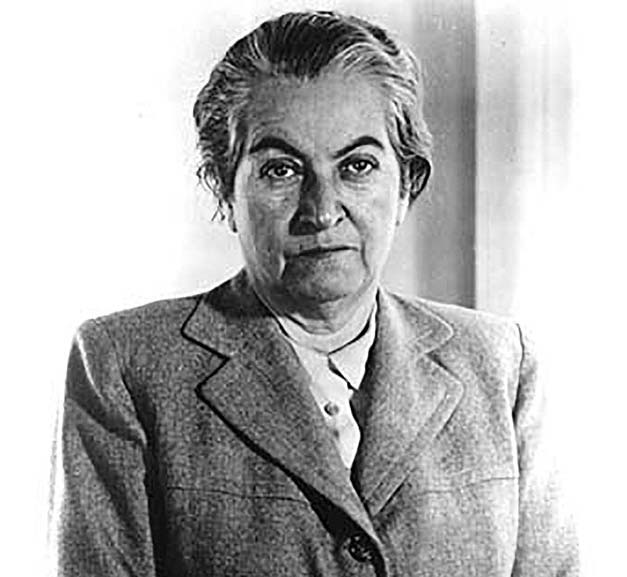 Lucila Godoy Alcayaga (7 April 1889 – 10 January 1957), known by her pseudonym Gabriela Mistral was a Chilean poet-diplomat, educator and humanist. In 1945 she became the first Latin American author to receive a Nobel Prize in Literature, “for her lyric poetry which, inspired by powerful emotions, has made her name a symbol of the idealistic aspirations of the entire Latin American world”. Some central themes in her poems are nature, betrayal, love, a mother’s love, sorrow and recovery, travel, and Latin American identity as formed from a mixture of Native American and European influences. Gabriela Mistral portrait also appears on the 5,000 Chilean peso bank note.

Mistral was born in Vicuña, Chile, but was raised in the small Andean village of Montegrande, where she attended a primary school taught by her older sister, Emelina Molina. She respected her sister greatly, despite the many financial problems that Emelina brought her in later years. Her father, Juan Gerónimo Godoy Villanueva, was also a schoolteacher. He abandoned the family before she was three years old, and died, long since estranged from the family, in 1911. Throughout her early years she was never far from poverty. By age fifteen, she was supporting herself and her mother, Petronila Alcayaga, a seamstress, by working as a teacher’s aide in the seaside town of Compañia Baja, near La Serena, Chile.

In 1904 Mistral published some early poems, such as Ensoñaciones (“Dreams”), Carta Íntima (“Intimate Letter”) and Junto al Mar (“By the Sea”), in the local newspaper El Coquimbo: Diario Radical, and La Voz de Elqui using a range of pseudonyms and variations on her civil name.

In 1906, Mistral met Romelio Ureta, her first love, who killed himself in 1909. Shortly after, her second love married someone else. This heartbreak was reflected in her early poetry and earned Mistral her first recognized literary work in 1914 with Sonnets on Death (Sonnets de la muerte). Mistral was awarded first prize in a national literary contest Juegos Florales in the Chilean capital, Santiago. Writing about his suicide led the poet to consider death and life more broadly than previous generations of Latin American poets. While Mistral had passionate friendships with various men and women, and these impacted her writings, she was secretive about her emotional life.

Gabriela Mistral had been using the pen name Gabriela Mistral since June 1908 for much of her writing. After winning the Juegos Florales she infrequently used her given name of Lucila Godoy for her publications. She formed her pseudonym from the names of two of her favorite poets, Gabriele D’Annunzio and Frédéric Mistral or, as another story has it, from a composite of the Archangel Gabriel and the mistral wind of Provence.

In 1922, Mistral released her first book, Desolation (Desolacion), with the help of the Director of Hispanic Institute of New York, Federico de Onis. It was a collection of poems that encompassed motherhood, religion, nature, morality and love of children. Her personal sorrow was present in the poems and her International reputation was established. Her work was a turn from modernism in Latin America and was marked by critics as direct, yet simplistic. In 1924, she released her second book, Tenderness (Ternura).